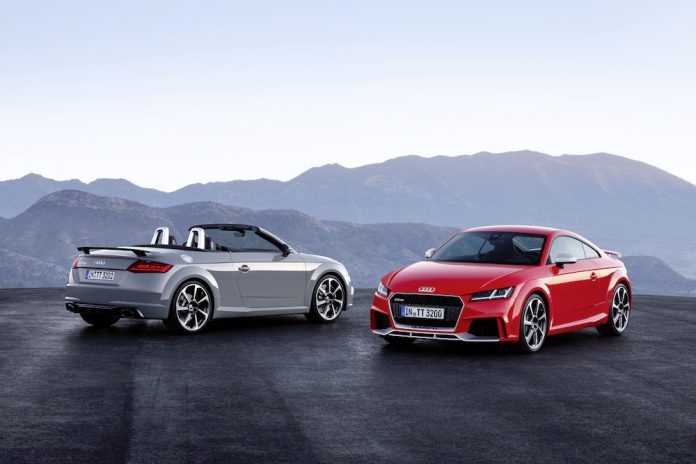 The fastest ever production Audi TT is almost here, in fact it will be available to order later this month at a price of £51,800. It’s the new TT RS which can be selected with in either hardtop or roadster form. Just how fast is the new model though? Let’s have a look.

Powering the TT RS is a 305bhp five cylinder 2.5 litre TSFI engine which is linked to a seven-speed S Tronic automatic gearbox. Combined they are able to propel the TT RS to 62mph in just 3.7 seconds – that’s supercar territory! Not bad for a car that will cost about half as much as the more exotic stuff. The 0-62 time is a little slower if you choose the roadster – you’ll have to ‘make do’ with 3.9 seconds. I know, bummer right?

​​Top speed is limited at 155mph but a Dynamic Package Plus can be selected which allows the top speed to be increased to 174mph – nice. The package also includes a new sports exhaust system to give a more distinct sound – double nice.

Brain to go with the brawn

The engine is the obvious vocal point of the TT RS but there is much more to this car than five brutal cylinders. The new car is lighter than its predecessor which may not sound like a great deal but hopefully you’ll be able to feel the difference in the bends. The car has been designed to be more aerodynamic using design features such as large air inlets, aerodynamically-shaped and the obligatory spoiler at the rear. A raft of technology will be available as well, including Audi’s Virtual Cockpit, a 12.3″ interactive heads-up display.

No, not literally – the new TT RS can be specified with new something called Matrix Organic Light Emitting Diode. Huh, say what now? These are new rear lights with a 3D design comprising of four wafer-thin units which emit a high contrast light. The lights cast no shadows and and require no reflectors, making them highly efficient.