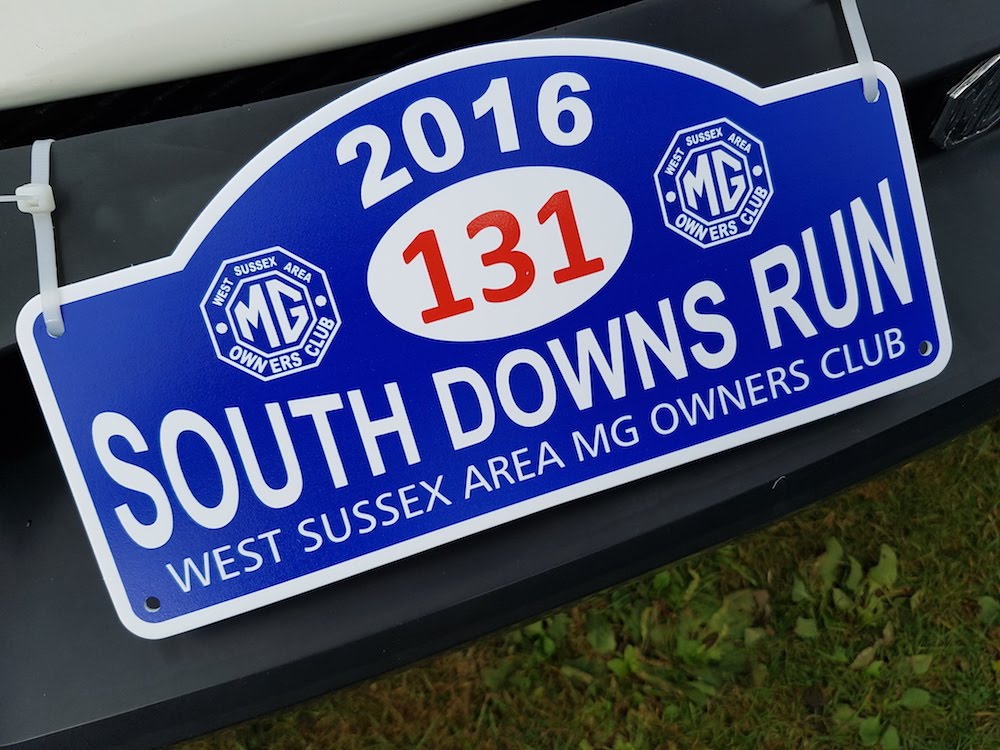 So last weekend I took part in the South Downs Run which was organised by the West Sussex MG Owners Club. I got invited to the event by Shaun Loader from the Gravesend MGOC and I was keen to take part but I was missing one crucial thing – an MG. After a lot of shopping around and research I stumbled upon Danewest Automotive based just outside of Sevenoaks which was able to offer a cream 1979 Midget.

The second thing I needed was a navigator as the route is laid out by set directions. Step forward Patsy Alleyne-Wake, my wife. Her eyesight isn’t the best so this shaped up to be an interesting run but to her credit she did a pretty good job in the end. I filmed the day and I aim to get that uploaded in the next few days.

We arrived at the meeting point in Arundel at about 9:30 and the weather didn’t look promising. Despite this there was already a plethora of different MG models on show as well as a Triumph Stag convertible which looked a bit lost. I bumped in to Shaun Loader and Neil Carter before making my way over to the small gazebo to register.

I was handed a plaque to put onto the the front of the car as well as a comprehensive list of directions that quickly confused Patsy. I left her to it as I applied the plaque to the plastic bumper of the Midget – I much prefer the chromework of the earlier midgets. The clouds looks here to stay but after checking the weather app it seemed it wasn’t due to rain. So Patsy and I bravely put down the soft-top before we made our way on to the tarmac.

And we’re off… and lost already

We started off well but it wasn’t long before we got lost, unfortunately we made the mistake of following someone else that was going the wrong way but we quickly learnt where we had gone wrong and got back on route. The air was rather cool but not enough to make wearing a t-shirt too chilly. We made our way along lovely – but tight – country lanes that had large trees making and a green archway.

It was nice to be free from speed humps, traffic and all the other things that ruin an unadulterated driving experience. We made progress along the way and to her credit Patsy was a brilliant navigator although it was a bit hard to hear her sometimes due to the wind swirling around the car. The only times were really went wrong is when we latched on to other cars so if you want some advice, don’t follow other cars, the chances are they are going the wrong way! Enough about the route, what about the drive? Well the Midget is an absolute gem, the thrum of the engine is full of character and the car pulls quite well. Just 65bhp is on offer from the 1.5 litre engine which will get the two-seater to 60mph in 12.3 seconds and then on to a top speed of 101mph. The power doesn’t sound like much but as the car is so light it actually feels rather nippy, plus this car is more about the ride rather than out and out power.

The pedals take a while to get used as they are heavy and offset to the right – the throttle is also in the right hand corner of the footwell! The steering has a lovely weight to it thanks to the lack of power steering and it gives great feedback. The 4-speed manual gearbox is also heavy but i must admit I got a great deal of satisfaction using it. Changing gear was like operating a lever on a piece of heavy machinery, it certainly felt manly.

To ensure a smooth gearchange you can’t rush it – you certainly get a sense this car is happy cruising down a country lane as opposed to tearing along the motorway but in truth that’s what it was designed for. In truth, the Midget is not a happy bunny on the motorway, thanks to the windscreen that is almost vertical the car does attract a lot of wind noise which can become unbearable if you take it pass 55mph or so. Thankfully there wasn’t many fast motorway stretches on the run so that was never a problem.

The car hadn’t started the run with a full tank – I know, schoolboy error – but I had the plan of going in to a petrol station when we happened to pass one. This never happened so as we went past the wondrous scenes of Beachy Head I realised the needle was almost on empty. S**t! After getting Patsy to find the nearest petrol station on her phone we were able to find one that was about 3 miles away. ​​To top it all off I then needed the toilet so it became a case of double jeopardy as I now need to empty my bladder as well as fill up my petrol tank. The car (and my bladder) made it to a petrol station just in time and it was the largest sigh of relief I’ve breathed in quite some time! After this mad dash we found very hard to retrace our steps to get back on route and ended up getting lost. After about 20-30 minutes of aimless driving we were able to get on the home stretch to Eastbourne.

About 3-something we made our way in to Eastbourne and found the finishing point along the coast. On our arrival we was giving a fridge magnet for finishing and told where to park up. There was an impressive collection of MGs on show and the sound of a brass band was in the air. The wind had picked up and the temperature had dropped a little. We bumped in to Shaun and Neil once more who had been there for about an hour or so.

I then treated myself to an ice cream, Patsy got a portion of chips which I helped her eat and before you know it was time to get back on the open road to go home. All in all it was a great day and I would definitely recommend the event to any MG owners or you could do what I did and hire an MG if you want to take part but don’t happen to own an MG. Paul from Danewest Automotive was very helpful and I would definitely recommend his services.