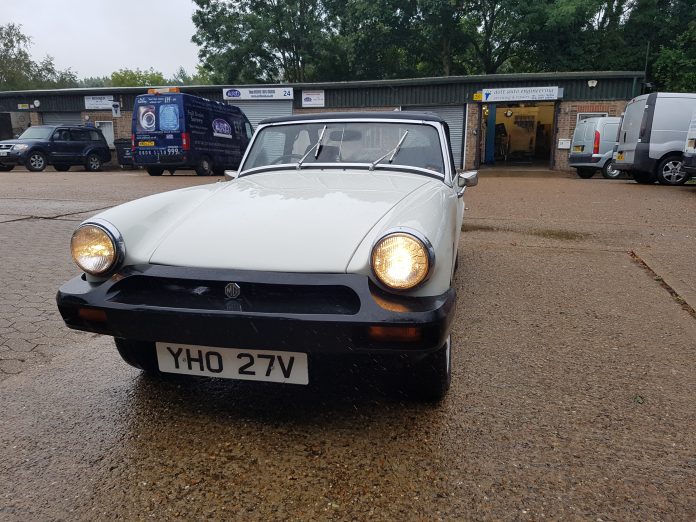 So as you may have seen on my social media, I have spent the company in a classic MG Midget. It’s been a great time and one that I had been looking forward to for ages! This all came about after a chap called Shaun from the Gravesend MGOC invited me down to an event called the ‘South Downs Run’. This all sounded splendid but there was one problem – I do not own a classic MG.

At first I thought I would see if I could borrow an MG from a member from the MGOC and then I decided that would be a long shot as let’s face it, who wants some unknown driving their pride and joy? I do not have the money to go out and buy one so the logical step was to hire one. After a bit of research I stumbled upon Sevenoaks-based Danewest Automotive which had a lovely looking cream 1979 MG Midget.

Paul was the contact at D.A. and he was very accommodating and helpful. After just a few emails it appeared this was a perfect fit. I was counting down the days to pick it up although the journey to actually pick it up was far from perfect thanks to problems on the M25 and A21. It was a glorious day so it seemed natural to take the roof down – plus I wasn’t sure I’d fit in with the roof up! The interior featured inviting black leather seats contrasted with red seatbelts – a winning combination if you ask me! The cabin has small dimensions and because the car itself is low it meant getting in and out a bit of a challenge. The car looked great in the Kent sunshine and I was itching to get going.

​​Paul had already got the car warmed up so I was good to go once I had signed the necessary paperwork it was time to hit the road. That was easier said than done as the controls were heavy and they took a little getting used to. Once I was out on the road I was taken in by the thrum coming from the 1.5 litre engine and the wind going through my hair.

The day I picked it up I was attending a wedding reception so what better way to make an entrance than turning up in a classic MG? I got suited and booted in one of my best suits before climbing in the car as gracefully as possible. Ok, I wasn’t quite suited and booted, I had to wear trainers to drive in as my brogues were likely to slip of the metal pedals.

​The rain was coming down pretty heavy so I was glad I had opted to put the roof up earlier in the day. My wife and I made our way to East Horsley where my friend was having her reception and as predicted, the car got quite a few looks – and comments. It was nice to have an interesting car for once. As much I love my Ibiza FR, it’s not a car that attracts any attention. We had to slip away from the party early as we had to go to Worthing for our overnight stop for the South Downs Run.

I won’t cover this subject too extensively as I’ve done another article on this and that article is rather extensive. The South Downs Run started in Arundel and the route goes all along the South Downs (obviously) to the coast of Eastbourne. Patsy, my wife, was my navigator as we made our way across the tarmac of winding country lanes taking in impressive scenery as we went. I was a wonderful day and we didn’t get lost too much although I came very close to running out of petrol! So this morning I had to run the little Midget back to its home outside Sevenoaks so that meant I had to go on the M25 in Monday morning rush hour traffic – brilliant. In fairness it wasn’t too bad although i had to have the roof up again due to poor weather. I filled the car up before giving it back to Paul at Danewest Automotive and I didn’t want to give the keys back to him if truth be told.

The weekend with the Midget was a great adventure and I implore you to hire a classic car as it’s an experience that really makes you value driving. If you don’t fancy the Midget Danewest Automotive has other cars on offer such as a VW Campervan or even an Austin Seven. It’s also a great way of testing the waters if you fancy buying a classic car for yourself as it’s not for everyone! For more details about what about Danewest Automotive head to the website.