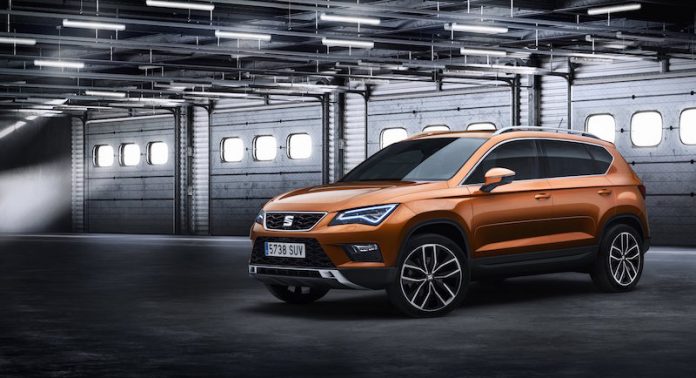 Today marks the unveiling of SEAT’s new and first ever SUV in what Luco De Meo (SEAT President) has dubbed a new era for the Spanish company. The car in question is the SEAT Ateca which is quoted as a “unique combination of distinctive design, dynamic driving fun, urban versatility and compelling utility”. The name comes from the name the Spanish town west of Zaragoza and will be hitting the UK showrooms in September later this year.

What are the key features?

This is an area where the SEAT should do well as they look to make the Ateca one of the most innovative SUVs in the market. They aim to achieve this with clever technology and efficient engines. Speaking of which, they range from 115 PS to 190 PS coming from either a turbocharged TSI petrol or TDI unit which can be mounted to a manual or DSG gearbox. Expected MPG will range from 56-66 MPG depending on what engine variant is selected. The Ateca will be available in either front wheel drive or rear wheel drive. Going back to the techy side of things, the Ateca comes with many bells and many whistles. It features SEAT’s ConnectApp: Media System Plus which features an eight inch screen offering wireless mobile phone charging, bluetooth connectivity and is compatible with Apple CarPlay and Android Auto. It also features Traffic Jam Assist which makes stop-start traffic more bearable for the passenger. On top of this it also offers Emergency Assist keeping the driver safe with features such as traffic sign recognition, blind spot recognition are just some of them. SEAT appear to have gone all out in this department and their new SUV clearly has intent. It is not there to fill a gap in the market or to fill a hole in their range.

SEAT are also keen to point out that the Ateca offers a unique design and also unique driving fun. I cannot argue that it’s a fine looking machine but I must admit it looks like a Leon that has been stretched over a Volkswagen Touareg’s body. That is not an insult, merely an opinion, I think the car looks sharp and cutting edge. I think it certainly has the exterior to match technological brain. So I feel the unique design applies more to the software rather than the hardware. The Ateca features an intelligent lightweight design which will provide a dynamic driving experience whilst keeping the bodyshell stiff. There are 2 TSI petrol engines, 1.0 and 1.4 which offer 115 PS and 150 PS. There are also 2 TDI diesel engines which offer 150 PS and 190 PS from a 1.6 and 2.0 respectively.

So, all in all this looks to be an exciting and promising prospect from the Spanish car manufacturer. UK buyers can start registering their interest as of the 11th of February.