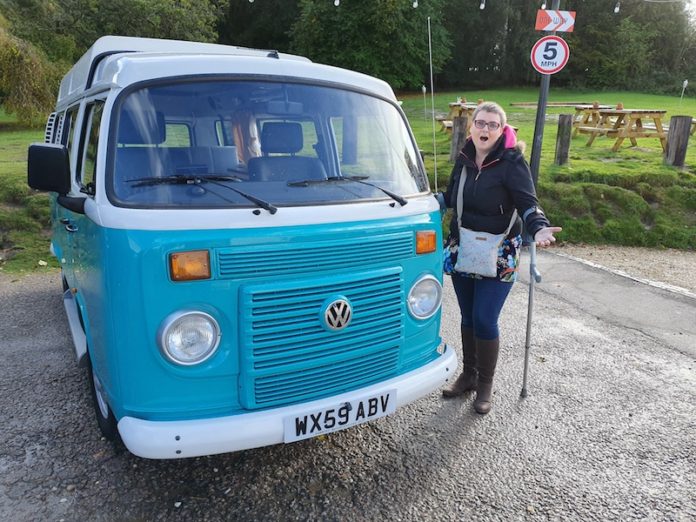 This article is long overdue, but what with the current Coronavirus lockdown in the UK, I’ve got plenty of time to now write it, so there’s no excuses… Cast your mind back to September 2019, a simpler time, when all we really needed to worry about, was the continuous tedium of Brexit news. Ah, what I would give now to trade COVID-19 for Brexit news, but I digress…

My wife, Patsy, hit a significant milestone last year – the ripe age of 30 years old. She’s been a lover of campervans for a long time, but she’s never actually spent any time in one – nor have I, for that matter. So, I hatched a plan to hire one, surprise her, and go on a nice little road trip.

Finding a campervan for hire wasn’t that difficult – Google does all the hard work – but finding the right one isn’t quite as straight forward. Preferably, I was after a classic model, and not a modern one because let’s face it, the older ones have more charm. The slight issue with that, is potentially getting one that has a few niggles, and potentially break down on you.

Luckily, I came across a website called ‘GoBoony’, which looked inviting, easy to navigate, whilst offering a good amount of choice. The great thing about their website – I’m not being paid to say this, by the way – is that there is a function to leave reviews. This is a good indicator as to what the vehicle has been like on previous hires; I was able to see there were some campers that had teething problems or perhaps the experience wasn’t completely positive.

You can also search by location as well, and that was handy as I needed one that I could pick up on my way to Cheshire as Patsy and I had a pre-organised visit to Cheshire zoo. After a bit of searching, I came across a camper that seemed to fit the bill brilliantly. Step forward – or should I say roll forward – Minty.

Belonging to loving owner Peter, Minty is a T2 Campervan that may look like it’s been around for decades, but in fact Minty was built towards the end of the noughties. That’s because the T2 A.K.A. Kombi was still made under license in Brazil until the end of 2013. Once imported in to the UK, it was sent to Danbury, a company well-known and respected for campervan conversions, and their work speaks for itself judging by the condition of Minty. After springing the surprise on a very unsuspecting Patsy, Peter took us around the vehicle and he was modest to say the least about his cracking campervan. We were both very impressed by the finish and the standard in which the conversion had been done. It may look old, but it has modern features such as a front view and rear view camera, tyre pressure monitor system, TV with DVD player, 2 USB ports, stereo with aux connection, and a fridge. Don’t think that this campervan has lost its charm due to its mod cons, as it only take a few yards of driving to reveal this Minty offers up a different kind of driving experience. The steering feels almost disconnected from the wheels, and you’ll need to work the steering wheel often to match the movements of the camper. Peter hit the nail on the head when he said you have to work with Minty, and the way she sways, it’s almost like having a dance partner in that respect. Then there are the pedals, which feel like they are sprouting directly under your feet, so getting used to pedals did take me a bit of time. It’s a challenge, but one that gets easier the more you do it. On the plus size, the visibility is fantastic, thanks to the large amount of glassware fitted the vehicle. There’s not much sound insulation, though, so the interior will not be a quiet place to be whilst on the move, especially once you hit faster roads such as motorways. There’s only 4 gears, so there’s no higher gear for cruising, but the campervan wasn’t built to pound motorways was it? At this point, you may think this was a negative experience as all I’ve really done is spoken about the more challenging things on what it was like to live with Minty. I don’t want to give that impression, as there is plenty of good things to take away. For starters, you will get attention wherever you go, and a classic VW Campervan is a vehicle that will always be greeted with smiles.

Settling down for the night

After our long drive to our campsite it was time to settle down for the night, and to experience our first ever time sleeping in a campervan. Setting up sleeping arrangements was stress-free as the rear bench folds down to make up two thirds of the bed, and we also extended the pop-top roof to give us better space to move around – I’m 6’2″.

I was concerned that we were going to get cold during the night as it wasn’t the warmest time of year, but we needn’t have worried. If anything, we were actually getting a bit too warm believe or not! Minty came with silver insulating panels that stick on to the windows, which were a big help – as were our pyjamas – so it was definitely a cosy space in which to sleep. Sound insulation was pretty decent as well – it beats sleeping in a tent! – and there was no issue with battling incoming light thanks to curtains dotted about the cabin. The bed was comfortable too, so getting a good night’s sleep was far from tricky. A home from home

We woke in the morning in our little home from home, and of course, the first thing we did was to make a cup of tea. Minty came with essentials such as mugs, cutlery, and kitchen roll, meaning we needed to contribute very little to the trip. We supplied bedding, the all-important kettle and a few snacks.

It was a simple pleasure, just sat there in my PJs on a sunny-ish morning, sipping on a hot cup of char whilst hearing robins singing in the bush – lovely! After enjoying a piping hot porridge pot, it was time to hit the road again and to go to the zoo. The drive wasn’t too long, but it was long enough to once more appreciate the charm that Minty has pouring out of every orifice. After enjoying a rather wet day at the zoo, we shook ourselves off and made our way back in to Minty to carry on our adventure. Over the course of the weekend we also went out for dinner and also visited a bird of prey centre, so Minty covered a fair few miles in our temporary ownership and with each one she/he (we still can’t decide whether it’s a he or she – even Peter says it varies) wormed her/his way in to our hearts more.

This all meant it was tricky to let go, but you know what they say, all good things come to an end. After an extensive drive from Cheshire back to Stratford Upon Avon to hand the key back to Peter, and to climb back in to Mk1 Mazda MX-5 – a very different kind of vehicle, but like Minty, one that evokes emotion. Would we hire Minty again? Do you even need to ask, of course we would! In fact, we aim to take her/him out once all of this Coronavirus nightmare has gone away. If you want more details on how to hire Minty, you can either head to https://www.goboony.co.uk/ or https://vwcamper-hire.uk/

A massive thank you to Peter, who was very helpful, and made the process easy.