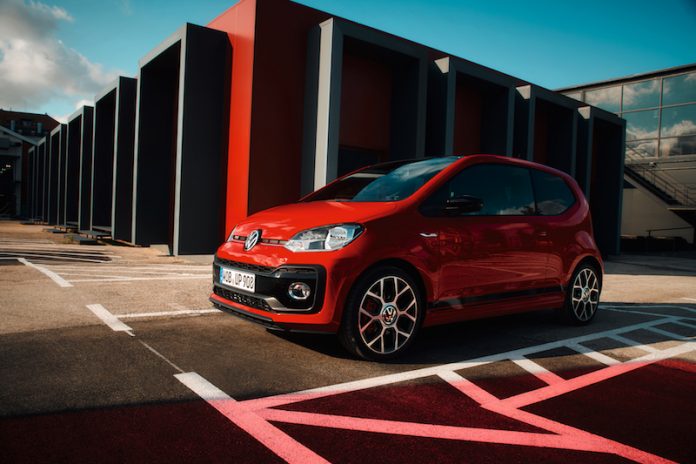 Volkswagen’s smallest car – and indeed smallest GTI – has returned for a new year, and a new decade in the German brand’s model lineup.

If you’re a big fan of the powertrain of the Up! GTI you’ll be delighted to hear that the small-but-perfectly-formed 1.0 litre three cylinder turbocharged petrol engine, which produces 115hp and is fed to the front wheels via a 6-speed manual gearbox. This means it retains the same 8.8 0-62mph time, which doesn’t seem overly impressive on paper, but Up! GTI has never been about out-and-out power.

The Up! GTI also retains the same 17″ alloy wheels as before as well as GTI styling, GTI badging and the hallmark ‘Jacara’ checked cloth interior. At this point you may be wondering what has actually changed. Erm… the badge. Yes, the new Up! GTI (and the rest of the Up! range for that matter) is the first Volkswagen to bear the brand’s new badge.

To be fair to Volkswagen, the rest of the Up! range has seen some actual, noticeable changes, but VW clearly took the ‘if it ain’t broke, don’t fix it’ approach when it came to the pint-sized Up! GTI. This makes sense when you consider it’s been a popular, award-winning car. It would be nice to see an R, though..,