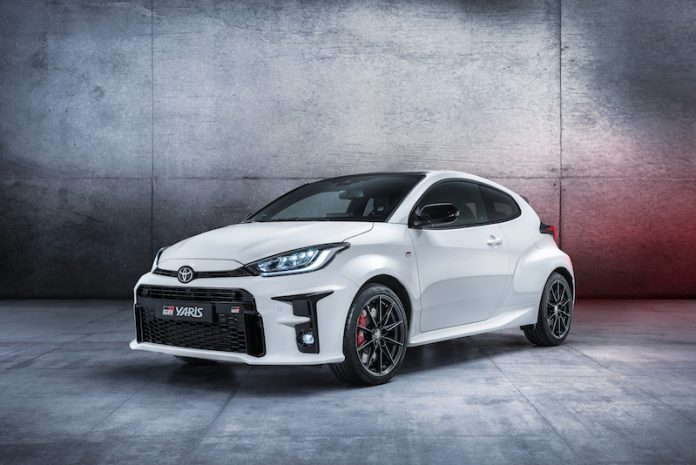 Remember the bonkers Toyota Yaris GRMN? You know the one, sporty livery, punchy supercharged engine, limited production run, and oh yeah, expensive. Well, the Japanese brand has followed it up with another hot Yaris. It’s called the GR Yaris, and whilst the price for it is yet to be confirmed, there are plenty of juicy details to get tongues wagging. Forged in the hear of a World Rally competition

Those are not my words, but the words of Toyota, whom have stated that its new GR Yaris has been developed directly from the ultra-tough proving ground that is the World Rally Championship. Not only has Gazoo Racing been heavily involved in the development of the new hot hatch, but Tommi Mäkinen Racing – Toyota’s partner in the WRC – has also been involved, too.

This means that this little pocket rocket has all wheel drive, which is bound to raise a few eyebrows as it’s uncommon to find such as drivetrain for a hot supermini. Toyota is keen to stress that its GR-FOUR system is ingenious as it uses slightly different gearing for the front and rear axles, meaning it allows for a theoretical range of front/rear torque balance from 100:0 (full front-wheel drive) to 0:100 (full rear-wheel drive). The GR-FOUR is considerably lighter than a normal AWD system as it uses just one coupling, and not two. There’s a dial in the cabin which allows the driver to choose how they want the car to behave; in Normal mode 60% of the power is fed to the front wheels, and 40% is sent to the rear, but if you feeling a bit more…adventurous, there’s a Sport mode that’s able to send 70% to the rear axle, and the remaining 30% to the front. A track mode is also an option, and that allows for a 50:50 split across both axles fast, competitive driving on circuits or special stages. In each mode, the torque balance will automatically adjust in response to the driver’s inputs, vehicle behaviour and road or track conditions. Powering the new Toyota GR Yaris is an all-new 1.6 litre turbocharged (sorry, supercharger lovers) four cylinder petrol engine, which is able to pump out an impressive 261hp along with a whopping 360Nm of torque, no wonder they’ve opted for all wheel drive! This power is also mated to a 6-speed manual gearbox, and if you work it quickly enough, Toyota states that the GR Yaris will propel you to 62mph in just 5.5 seconds, and you’ll continue to a top speed of 143mph!

The GR Yaris may have a heavyweight punch, but it’s far from a porker when it comes to tipping the scales. The roof for example, is made from carbon fibre polymer, and aluminium is used for the bonnet, doors and tailgate, meaning it weighs 1,280kg, which is not bad going when you consider it’s lugging about an all wheel drive system. On top of this, buyers lucky enough to get their hands on this monstrous small hot hatch can opt for the optional Circuit Pack. This gives the car a limited slip differential at both axles, performance-tuned suspension, and 18″ forged alloy wheels shod in Michelin Pilot Sport 4S tyres.

Right, let’s just all pray that Toyota don’t slap a massive price tag on it…