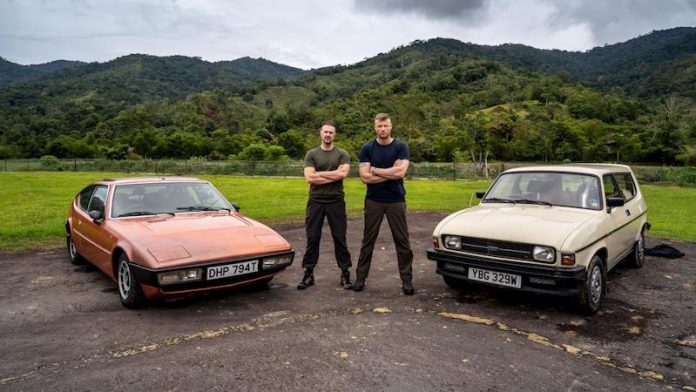 A word of warning – if you like rare classic cars, you may find tonight’s entry of Top Gear a little difficult to watch. That’s because the main theme of the show is to find rare classic cars on a budget. This all sounds rather splendid I hear you say, but I’ve not finished yet. After securing their classic delicacies, they get get shipped to Borneo all of places.

After the show’s snappy intro the studio, we get whisked away to Borneo where we join Paddy McGuinness and Freddie Flintoff, but sadly no Chris Harris. The two northerners quickly whip off the covers of to reveal a Matra Bagheera and an Austin Allegro – two very different cars.

On the one hand, you have a French sports car with three seats – like a McLaren F1 as McGuinness said – and the other is an estate that has only two doors – well three if you include the rear tailgate. Keen to show off his French fancy, McGuinness swiftly organised a drag race, and there’s no prizes for guessing who won… From there, the boy from Bolton goes on to talk about how Matra has got a wealth of motorsport heritage and then you have Freddie’s Allegro Estate. It may be as pretty as wart, but it does give Freddie as easier time once things get a bit tough. The banter was good, but for me, the film was definitely missing the presence of Harris.

Speak of the devil…

…and he shall appear. Chris Harris takes his usual mid-show slot for his review, and this time it’s the Cullinan – the SUV by Rolls Royce, only it’s not an SUV, according to Rolls Royce. Harris starts of by paying the Cullinan a fair few comments, and I’ll be honest, I was surprised that Harris was so positive about it, but he was only getting started.

He then takes a metaphorical sledgehammer to the £250,000 SUV by stating that it was offensive to his eyes and that the flying lady must be “ashamed” to feature on the car’s massive front end – oh, this is more like it. From here on, Harris pulls no punches in a bold and brazen manner, which must have had the luxury British car marque cowering behind its very well finished sofa. Following, the film the Top Gear boys reveal that Rolls Royce wouldn’t give them a car, which explains the numberplate on the car used in the film. I don’t mean to sound like a terrible car bore, but it didn’t seem to be the sort of numberplate you’d see on a RR press car – the plate was 1 UND. So the car you see in the film was borrowed.

Welcome to the Jungle

After Bob Mortimer takes on the Test Gear Track in the GT86, it’s time to head back to Borneo in the rare classics. Before that, though, McGuinness and Flintoff clarify some of the potential controversy as the it was themed around the Sultan of Brunei, whom has generated some rather negative press lately. Anyway, enough of the politics. The northerners join the Ghurkas to help get their rare classics through the jungle so they can race to a very special car collector – yes, you guessed, the Sultan of Brunei. The banter continues to flow, but I still feel the absence of Harris was noticeable, and I think it serves as a reminder of how important to have a proper car buff as part of the proceedings.

I also found the film a bit frustrating, as I felt it was wrong to see two classic cars that are so rare being driven in such hard conditions. The Bagheera for example, was the only one in right hand drive and even featured in the original brochure for the car. Ok, so the Allegro is a car that won’t be missed by many, but rare is rare. Flintoff goes straight through the jungle whilst McGuinness got cold feet, opting to find a easier route along the river. From there it was a race to the palace of the Sultan’s palace, but who would win, the French panther, or the British estate that somehow thinks it’s a coupe?

We head back to studio and the cars are presented in new colourways, which I think was a nice touch. I won’t spoil the surprise, though, you’ll have to see it for yourself.

Tonight’s show for me, was the worst in the series, but that’s not to say it was a bad episode. I would have liked to have seen more of Harris involved, and I wasn’t crazy about the cheap car challenge.