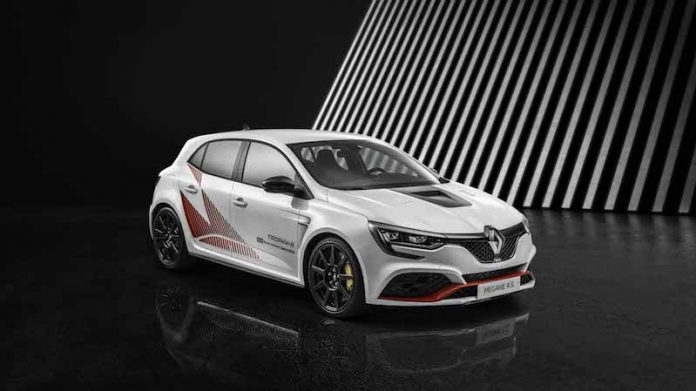 Now, you may not agree with me, but I feel as if the latest Megane RS has been overshadowed a little bit, with cars such as the barn-storming Hyundai I30N Performance and the look-at-me Honda Civic Type R. I must admit, when I first drove the Megane RS last year I felt a little underwhelmed. Yes, it was a decent enough effort, but it felt as if the Renault Sport team were holding back.

I have also driven the Trophy version – that was earlier this year – and that certainly felt as if the wick had been turned up a little. Now, however, you have the Trophy-R, a Megane RS that has been turned up past 11 in a bid to reclaim the hot hatch crown. Despite not going on sale yet, the new car has certainly made good ground as it’s beaten the Civic Type R to become the fastest front wheel drive production car around the Nurburging. Following the record-breaking feat, the French brand was rather tight lipped to say what that Trophy-R had and how it was able to knock Honda’s downforce monster off the top spot. That is until now, as Renault Sport has spilled the beans on what makes the Trophy-R so potent.

Much like the iconic R26R, the Trophy-R offers no more power than the Trophy version on which it is based on, but what it does offer is less weight. In fact, Renault has somehow found a way to shed a whopping 130kg, but it’s not all about keeping the new car of the carbs – there’s a limited slip diff, new suspension, and beefy, four pot brakes supplied by Brembo. In fact, Renault Sport state that the development of this car was built on three pillars: weight reduction, the maximisation of aerodynamic efficiency and more radical suspension systems. I’ll get on to that in a bit, though – what I want to cover is just how on Earth Renault found a way to get rid of so much flab. Well for starters, the rear seats have been left out, thus deeming the rear doors as useful as a pack of mini sausage rolls at a vegan picnic. Still, it won’t be a bother if you happen to only have one friend. In the front the Trophy-R receives composite Sabelt seats, which can be specified with 6-point harnesses to really get you in the racing mood.

Other weight-saving features include a bonnet made from carbon composite (half as heavy as the steel one used for the standard Trophy), a full carbon rear diffusor, 19″ alloys that are 2kg lighter per corner, an Akrapovic exhaust system made from titanium, a lighter rear axle, a smaller touchscreen, thinner windows for the rear, and even the rear wiper has been scarified. In case this isn’t all enough, you can opt for the Carbon Revolution alloys which save a further 2kg per corner.

Right, what about the suspension and the aerodynamics?

Oh, yes, let’s not forget about the other two pillars. Renault Sport has stated that the front suspension has been heavily revised, the axle geometry has been fined tuned to enable the Trophy-R carry more speed through the corners, plus there’s a limited slip diff for good measure as well as the Renault 4Control four wheel steering system. On top of that, the Trophy-R offers a rear strut brace, Öhlins dampers are adjustable and can be lowered by up to 16mm, and Bridgestone Potenza S007 tyres. Better still, the Trophy-R can be specified with carbon ceramic brakes – a first for this area of the car market. Aerodynamic changes include a front blade that has been tweaked to improve airflow, specifically towards the carbon rear diffusor that has thinner, F1-styled curved blades.

And…what about the power?

It seems a bit odd to finish with the power, but as you can guess, the Trophy-R is all about the three pillars, rather than offering the most powerful gun in an artillery. Having said that the cannon under the Trophy-R’s carbon composite bonnet is hardly lacking firepower. It’s a 1.8 litre, turbocharged four cylinder petrol which offers 300hp and 400Nm of torque. 0-62mph is done in 5.4 seconds – 0.3 seconds faster than the standard Trophy – and the top speed is 163mph, which is rather brisk, I’m sure you’ll agree. This power is mated how it should be – to the front wheels via a 6-speed manual gearbox.

How much is it? When can I get it?

Prices are yet to be announced for the new Renault Megane RS Trophy-R, but Renault has stated that the new car will go on sale in August, with just 500 available globally. 30 of those will be produced with the Carbon Revolution alloys and the carbon ceramic brakes. Could this be the fastest selling Megane RS ever? I reckon so.