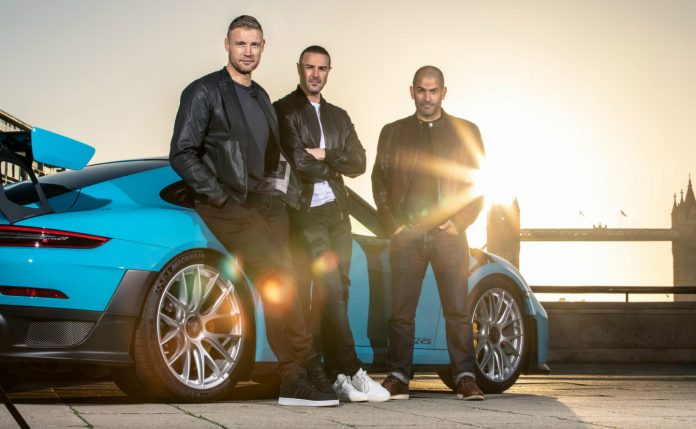 Like many,  I was taken aback when the BBC announced Paddy McGuinness and Freddie Flintoff would co-host the new series of Top Gear alongside Chris Harris – or ‘The Survivor’ as he should now be called. It seemed as if someone at The Beeb had smoked something rather potent to come to the conclusion that out of all the potential candidates, a comedian and a ex-cricketer would be the best fit for one of the largest, and well known motoring shows in the world.

Banter by the bucketload

I was keen to see what the dynamic would be with the two northerners bouncing off Harris and so far, it’s made for some great banter. At first it seemed as if Harris was going to be a bit of a third wheel, and although that seems less of a problem as the series has made progress, I think Flintoff needs to be very careful not to step over any boundaries – get it, boundaries? You know, because he used to play cricket? Erm, yeah, I’ll move on. I enjoy Flintoff’s schoolboy tomfoolery, but when he smashed a watermelon right on Harris’ bonce I thought that was a bit too much. How Harris didn’t flip is beyond me, but let’s face it, Freddie is not exactly a small bloke, and Harris, well he, erm, sorta is. That aside, the jokes have been flowing with ease, and episode two in particular had me in stitches.

It’s evolved – but for how long?

McGuinness and Flintoff are not car journalists, so it was always going to be interesting to see how they would fit in to the show’s format, and for the most part, it looks as if it will just be Harris that will doing the ‘proper’ reviews. That makes sense as many petrolheads will hang on to his every word, wanting to know his full appraisal on whatever car he is sliding around Hammerhead. I don’t think the same can be said for the other two, but I would like to see them give it a crack. This no longer feels like a show for bona fide petrolheads, although I imagine some would say it’s been that way for a fair few years now, but that comment rings even truer now.

I know we are very early in to the McGuinness, Harris and Flintoff dynasty but for the time being, it looks as if the shows will take the following format; the show begins and ends with some form of challenge, you have a Harris review wedged in the middle, with the celebrity guest shoehorned in afterwards. Apart from the guest bit, I’m happy with that format, but just how long can the production team continue to dream up cheap car challenges before they run out of ideas.

No power laps (well, not on TV, anyway)

One thing you may have noticed on the new series is that all the fast cars Harris has reviewed have gone around the TG test track, but the footage has not been shown. This is because the laps can only be seen online, which I personally think is barmy – and wrong. Surely it can’t be down to cutting time, as the laps aren’t exactly time consuming. So if you’re reading this Top Gear production team, bring them back to the TV please, thank you.

Time to move on

Sorry if I’m about to sound like a broken record as I’ve spoken about this before, but I really do think it’s time to drop the celebrity bit, and move on. To me, it’s lost whatever value it had for the show, and it simply feels like filler now. I think the time could be put to better use – why not bring back the news segment? That was a feature I really enjoyed in the CHM era of Top Gear, and I think the banter that MHF offer would make for enjoyable viewing. Or, the trio could dream up something similar to the ‘Cool Wall’, a feature they can build, mould in to their own, helping them to leave their own mark on the Top Gear franchise.

Humble pie for one, please

So, all in all, the new series of Top Gear is not as bad as I thought it’d be and I’ve actually enjoyed it. It’s not the show it once was, but that’s not to say that’s a bad thing. I just hope that Harris doesn’t drop a bombshell by announcing he’s going to leave as well, because at the moment he’s the one thing that’s able to do just enough to deliver some much needed motoring geekery for petrolheads like me. I realise that we are just three episodes in to series 27, but so far, it’s looking promising in my opinion, and I didn’t think I’d be typing these words. In fact, I was getting to start a collection to buy a nice reef to be presented for Top Gear’s funeral. Instead, I’m about to sit down for dinner, ready to have a munch on some humble pie.