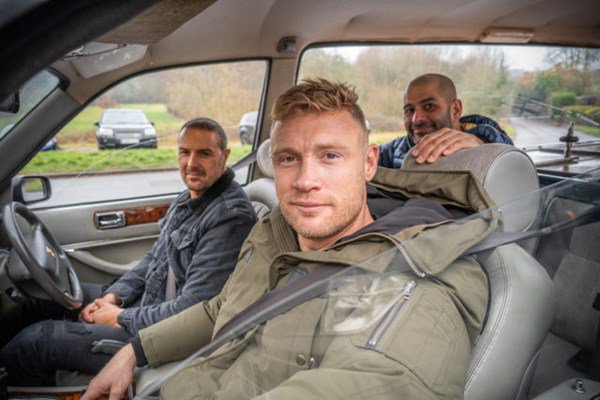 It’s Sunday, so we know what that means – Top Gear. In this week’s show, the two northerners and Chris Harris try to make a family car…out of a hearse. Yes, you read that right, a hearse. This is the brainchild of Paddy McGuinness, who may need to lay off the strong cheese before going to bed if this is what he’s going to be coming with on the regular…

Wouldn’t be seen dead in it

This is the same reaction that his esteemed colleagues have when Paddy arrives at the meeting point in his Daimler hearse, beaming from ear to ear like a proud father. The Take Me Out presenter was keen to show what makes a hearse so good, starting by the amount of space it offers. To prove this, he and Harris shove Flintoff in the rear, which wouldn’t have been comfortable, but his way in would have been less painful than his way out… Good banter, questionable choice of car – so far, so good. The trio then head to the Top Gear test track to take on more ‘traditional’ – or as Paddy called them, ‘vanilla’ – family cars to see which is the best in a drag race – or as the production team call it, the last space race. The idea is simple, there are three ‘parking spaces’ left, and the fastest three would win. The field had some strong contenders, including Damon Hill in a Citroen Berlingo, in what must have been a career highlight for him.

The next challenge is to see how much you can fit in the car and, well, it descended in to chaos. Harris’ car got ransacked and to top it all off, he gets used as a juicer by Freddie Flintoff. I really don’t know how Harris puts up with it, he’s a proper car journalist you know, haha!

Doing what he does best

Despite spending the last part of the show having a watermelon smashed on his head, Harris comes back strong to show us how a car review should be done. The car he was sliding about this time was one that you’ve probably never heard of – I must admit, I’ve never heard of it. It’s called the Dallara Stradale, and even the name sounds fast and exotic. Harris explains that the brand has been behind some of the greatness of cars such as the iconic Bugatti Veryon, and the achingly beautiful Alfa Romeo 4C. The production on this film is second to none, and as always, Harris’ delivery is accurate and assured as the 400hp Stradale. I was surprised to hear that it featured a four cylinder Ford engine but when the car weighs less than a Suzuki Swift, you don’t need an army of cylinders to give a car the same amount of potency as ghost chilli. Still, it’s not worth £200,000 if you ask me…

I’m not going to spend too long on this to be honest – I think the guest segment has died a tragic death, and I’d argue it has been on borrowed time for a while now. I don’t know what it is about this series, but the guest segment just feels even less interesting, and I think the time could be put to better use. Giving a hearse a new lease of life

A hearse is a car that is of course associated with death, so it seems ironic that Harris and Flintoff gave the Daimler a new lease of life by fitting a 350hp Lexus V8. It wasn’t long before the trio got to put it to the test as the production team organised a race on a beach against an AMG E63S Estate, a car that costs 80x what the ‘Overtaker’ cost.

After ‘beating’ the fast, flashy Merc, the trio continue on their driving holiday with Paddy ‘revelling’ in the chocolatey snacks and sweets onboard. It wasn’t just the lads that needed the fuel, the Overtaker did as well, which led to a fun game of fuel filler bingo. I won’t tell you who lost, but I will tell you that the loser had to eat a Fry’s Turkish Delight, a chocolate bar Paddy described as the chocolate covered toilet block. After that ‘treat’, the TG boys have to race a Stig-driven Land Rover Discovery, and Freddie takes the wheel for this one. Needless to say, it doesn’t end very well… He’s damn lucky that none of them needed an actual hearse, let’s put it that way.

The last challenge for the stricken ‘Overtaker’ is a safety test, which takes the form of banger racing – obviously. To spice things up, the production team drafted in an old friend – Sabine Schmitz. It was nice to see ze German back, although it would have been good for her to get some more screen time, but that may come later in the series.

I didn’t enjoy the show quite as much as last week, but I’m still enjoying it, which I never thought I’d say to be honest. The banter is flowing really well, although I do think Flintoff takes a few too many liberties with Harris, but I suppose it adds to the entertainment – I bet Chris isn’t a big fan, though. Speaking of the man that likes to go sideways, I like the way how the TG production team have put his reviews in the middle of the show as it helps to break it up, and it also gives petrolheads like me some ‘proper’ car content. The celebrity guest segment? I think it’s time to scrap it.