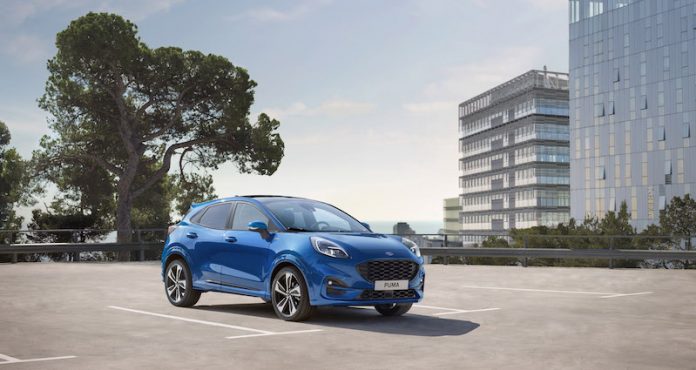 If you happen to be my age (29) or older, there’s a good chance you’ll remember the Ford Puma. Produced in the 90s, it was essentially a coupe version of the Fiesta, and in my opinion it was quite a good looking thing, especially when it came to the special edition ‘Racing Puma’. There’s good news, as Ford has unveiled a new model, however, it’s probably not what you might be expecting… As it stands, Ford has the following SUVs/crossovers in its UK range; EcoSport, Kuga, Edge, and the Active series if you want to include that as well. So that’s no less than six cars, but the Puma will now bring that total to seven. Ford it seems, is very keen to make ground in this area of the market, although I suppose that’s not surprising as the world has gone SUV mad. For starters, Ford states that the Puma represents the new design language the Blue Oval has to offer, but at first glance, I’d say it’s lost in translation. I wouldn’t say it’s an ugly car, it’s just the front end has a face that looks really pleasantly surprised about something. Anyway, let’s leave the looks because A) they may grow on me, and B) looks are subjective. So then, let’s move on to more pressing matters. (Edit: I have to say, I do rather like the rear – it’s just the front that doesn’t quite sell it for me.) The boot space is Mega…Box

Space is an area where the Puma will be looking to wound its rivals as Ford states its new crossover will offer class leading storage with a boot capacity of 456 litres. The boot has a floor that Ford says is easily adjustable with one hand, and there’s even a feature called the ‘Ford MegaBox’. This feature is essentially a wide pit underneath the boot floor which can be used unstable items up to approximately 115 cm tall – such as houseplants – in an upright position.

Want to see the MegaBox in action? Check out this video from Ford: https://youtu.be/PwEZ6_kWHtQ

Ford also states you can use the MegaBox to conceal dirty sports equipment or muddy Wellington boots – very handy indeed. The synthetic lining and drain plug in the bottom of the Ford Megabox makes it easy to clean with water. Loading the car should be a doddle, too, as the Ford Puma is available with a hands-free opening tailgate, which is a first in its segment – again, very handy. In regard to the engines, the new Ford Puma as you would expect, will be offered with a 1.0 litre, three cylinder EcoBoost petrol engine, however, it will feature a mild hybrid. The power outputs available from the engine will be 125hp and 155ps, both of which will have the mild hybrid system, which Ford states is able to offer the Puma 50% more torque at lower engine speeds for a punchier drive. The engine also features cylinder deactivation, meaning it can run on just two cylinders if needed to give better fuel economy. There will be a diesel engine available, but that will come after the car has launched as will the 7-speed automatic gearbox.

The new Ford Puma will also feature driver assistance as seen in the new Focus, meaning buyers will be able to make use of such features as adaptive cruise control with Stop&Go, lane centering assist, Ford Park Assist, post collision braking, blind spot monitoring, and speed sign recognition. There will also be the option to have a wide rear view camera, which like the hands-free tailgate – and the massage seats for that matter – is a first in its segment.

There will also be a feature called Local Hazard information, which is able to notify drivers of any potential hazards on the road ahead even if it is not visible due to a bend in the road or other vehicles. That sounds like superhero stuff if you ask me, I would quite like to see that in action.

The new Ford Puma is due to go on sale at the end of year with full pricing and specification yet to be announced.