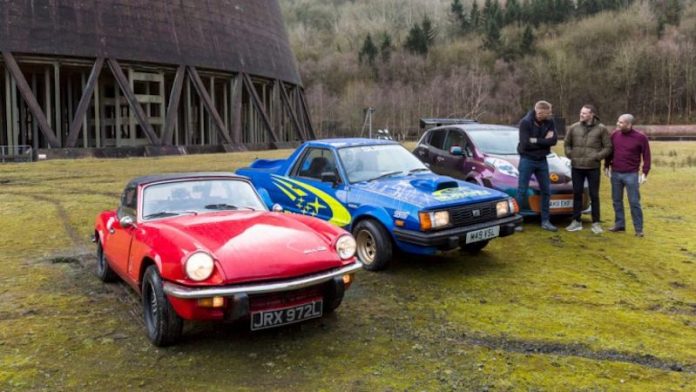 Electric cars are the future, but even in today’s age, some of them can be pretty expensive, especially if you want something a bit more sporty. This got the Top Gear lads thinking – can they make their own versions of cheap electric sports cars?

Chris Harris is the first to show off his creation, which is a Triumph Spitfire with the heart of a BMW i3. Thanks to the BMW batteries, this 70s classic is now throwing out 260hbp – not too shabby. Harris then arrives at the meeting point where we are ‘blessed’ with the sight of Paddy’s creation. It’s a Nissan Leaf that even the most avid Max Power fan would say is a bit much. As Flintoff said, it looked like Paddy was about to ram raid an Argos. Perhaps he should ram raid a Specsavers instead? Man that thing is ugly. It’s a bit slow, too, as it still has the 100 or so bhp it had when it left the factory.

Freddie’s effort looked pretty good, he chose a Subaru Brat in full Subaru livery – even Harris had to give him a bit of credit. However, more importantly, what he had under the body was a pack of Tesla batteries, meaning he had a whopping 500bhp to play about with. The car also had a cool name – the Mute. Get, it, Mute?

Slow and steady wins the race

Now that we had been introduced to all three cars – although I wish I had never laid eyes on Paddy’s – it was time for a race. Flintoff was the first to go out in his Mute, putting in a decent enough display before putting in a time of 1:10. He was feeling pretty good about that, but that was before his equally northern colleague beat him by five seconds despite having 400 less bhp. Mind you, McGuinness did jump the start…

That left Harris, whom put in a decent performance – a lot of it sideways, as you would expect, prompting McGuinness to ask why he has to skid all the time. Well, because he can do it very well, that’s why. The problem with going sideways is that it’s not the fastest way of getting around, which ran true as although Harris was able to beat Flintoff, believe it or not but he couldn’t beat McGuinness.

I must admit, I really enjoyed the banter and the schoolboy-like jibes, that the trio exchanged, and it was good to see Harris getting in on the action, as I felt he looked like a bit of a third wheel in parts of episode 1.

A shock to the system

From the abandoned power station, McGuinness, Harris and Flintoff made their way to a go-kart track down the road to Tamworth, a trip of 45 miles. That’d be easy, surely? Well not for Paddy who seemed to have less range than an cheap remote control car, meaning he had to beg some locals for some electricity. After McGuinness got to know the members of the community a bit more, and his horrid Leaf had a bit more juice, he finally got to the track for another test. This time it was inspired by a buzz wire; the idea was simple – whoever was out on track would be shocked whenever they touched the outside of the circuit.

I won’t tell you too much about what happened, but let’s just put it this way, it kind of descended in to chaos. It was certainly entertaining to watch, although I did feel pretty sorry for Chris Harris at the end – you’ll understand what I mean once you’ve watched it…

Is 3 the magic number?

Like last week’s episode, we leave the main action to join Chris Harris doing a proper, serious review. This week he’s behind the wheel of the new Tesla Model 3, a car that has been hotly anticipated for as long as I can remember. I was keen to see what Harris made of the car, as I imagine it’s not normally the type of car he’d go for.

His first impressions are good, but I must admit, the review wasn’t the most captivating as to me, it was just an electric car being driven around London. That’s not a dig at Harris, I just found the review a bit…slow. Thankfully, it seemed as if the Top Gear production knew this would be the case, so before you know it, Harris ends up at the Top Gear test track. From here, he explains that Elon Musk has boasted that the new Model 3 will outperform a BMW M3, which is quite the claim. Harris sets to prove whether this is right or not, and his first test is a drag race against said car, as well as a Mercedes AMG C63 S and a Alfa Romeo Quadrifoglio. To make matters even more interesting, Harris makes the drag race over half a mile and not a quarter. The results are rather dramatic.

Not satisfied with that, Harris sets up a handling test against the M3. The M3 looks composed, calculated, like you would expect, whereas the Model 3….well that looks rather sloppy. Despite this, much to my surprise, the Model was a bit faster. Yes, really, it was. It then set a decent time around the Top Gear test track, but once again, we didn’t get to see the lap – why?

The guests are back, whether you like it or not

Since Top Gear has gone through its succession of changes, some have said that it’s probably time for the guest segment to be binned, and as much as I don’t mind it, I can see where they are coming from. I was fine with it sticking in the LeBlanc, Harris and Reid era, but now the show has changed once more, I think it really is time to move on now. That aside, this week the TG boys had Danny Boyle and Himesh Patel on, and if I’m going to be frank, I thought it was a bit of a waste of time. The actual interview bit was quite short and in my opinion, a little uninteresting, the lap times seem to close to be genuine, and the challenge at the start just screamed ‘filler’ if you ask me. If the guest segment is going to continue in this theme, I think I would rather it be scrapped, with the time used for something a bit more worthwhile. No offence, Danny and Himesh.

We join the action back in the glittering midlands and back with the lads and their cheap electric cars. The next challenge to go to an electric car expo to see who can get the best reaction to their cars.

Freddie shows his car off by exercising to help charge, Harris offers the public ‘Free Donuts’, and McGuinness wears a spangly jacket that looked like it had been pinched from Graham Norton’s wardrobe.Despite the awful car, and the equally awful jacket, McGuinness was able to get another win under his belt, much to the dismay of his colleagues. Mansfield is where the last challenge takes place, and this time it’s all about endurance. It’s not the 24 hours of Le Mans, but instead it’s the 24 minutes of Le-Mans-Field. The idea is simple, drive as many laps as they can around the town city in 24 minutes. However, it wasn’t just each other they were competing against; there were cars such as the new Nissan Leaf and the latest Renault ZOE fielding the grid to make things a bit more interesting.

Despite having the power, Harris could barely keep the ZOE at bay, and then he hit mechanical problems, but at least he kept to the track, which is more than what Flintoff could manage as he ended up taking out half of the market stalls in the town. McGuinness also had a little blip, and he ran out of range again…

I’ll be honest, I really enjoyed tonight’s show, and I laughed many times. I feel the banter and the chemistry works really well, but it’s clear this is now an entertainment show, and not a car show. Many would argue that Top Gear has been this way for years, but you get the sense they are trying less to make it a car show, which makes sense as why else would BBC draft in Paddy McGuinness and Freddie Flintoff. This is no longer a TV show for the die hard petrolheads, but if you change your approach to it and treat it as entertainment show based around cars, I would argue you’re likely to enjoy it, and I think that rings true as I saw a lot of positive feedback – more than I expected to be fair – on social media following last week’s show.