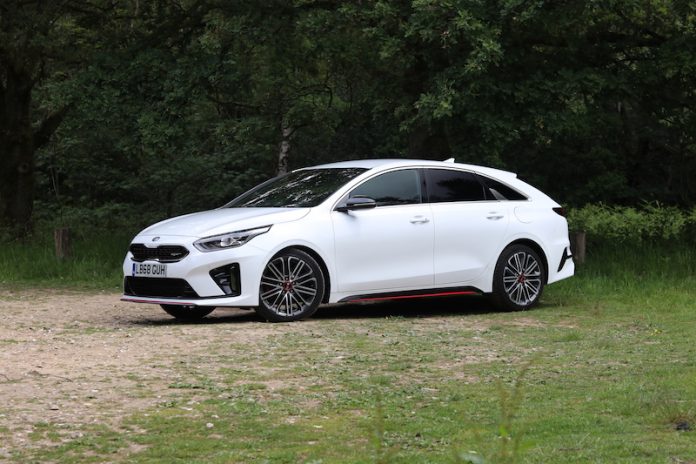 The new Kia ProCeed. Not only has Kia removed the silly punctuation from its name, but the South Korean brand has converted the three door hatchback in to a five door shooting brake. Safe to say it’s a bold new look, but is the new car any good?

Car design is of course subjective, but I doubt there will be many that think this new car looks like a bit of a minger. It’s an interesting model this, as it’s similar to the Ceed Sportswagon, but offers more of a svelte coupe form, so dare I say it could be a little…niche? That’s not necessarily a complaint, more of an observation.

The ProCeed may look similar to the Ceed hatchback and the Ceed Sportwagon, but in fact the ProCeed only shares the bonnet and front doors with its stablemates – the rest of the panels are new. The wheelbase and the width are the same, though, so the actual footprint of the car remains unchanged. The model you see here is the GT, meaning you got a sportier look, including racy red detailing to the outside, bigger alloys with plenty of spokes and a more aggressive body.

Like many, I have the view that it looks as if Kia got a Panamera and then placed it on to a photocopier when it comes to the rear, but you know what? I don’t mind that, it’s a good look. The inside is just as agreeable, if not more. It feels premium in the cabin; there’s plenty of leather and pleasing materials, so on the face of it, I think Kia has done well, but that counts for very little, if it doesn’t drive well, so with that in mind, let’s hit the road.

Stronger than it seems

There’s just one engine choice when it comes to the GT, which is a 1.6 litre turbocharged four cylinder petrol. It’s same engine carried over from its predecessor, which is by no means a bad thing, even though you don’t get any more power from it. Speaking of which, it produces 201bhp with 265Nm of torque and this power is mated to the front wheels via a 7-speed dual clutch automatic gearbox. Sadly, unlike the last car, you can’t have a 6-speed manual.

This car will hit 60mph in 7.2 seconds and continue to a top speed of 140mph, which may not be overly impressive to some of you, but to be truthful, in real life it feels faster. Plant your right foot and after a short delay, the GT picks up decent pace, which I think will please most drivers. I wouldn’t say it’s really enough to pin you to the back of your seat, but given the quoted horsepower, the size and weight of the car, I don’t think that’s a massive niggle to have. The engine makes a satisfying roar when you climb through the rev range – especially in Sport mode – but that is the thanks to a sound actuator that feeds engine noise in to the cabin. This may irk some, but I don’t mind it, and Kia isn’t the only brand to use such a system. However, if you don’t fancy having the attention-seeking noise, then you can simply select the drive mode back to normal and the engine becomes a lot more docile – it’s rather Jekyll and Hyde in that regard. Let me touch upon the Sport mode a bit more though; as well as making the engine more vocal, it also gives it urgency, plus the gearbox is quickened up and the steering heavier. Sadly, this car does not have adaptive dampers, so it won’t be the most comfortable car to live with. As you would expect from a performance orientated model, the ride is firm, and at low speeds it’s jiggly. The same could be said from similar cars, but the GT just doesn’t feel quite as civilised if you ask me.

However, before Kia fanboys want to take a pop at me, I do want to say this; the damping is very good, and I never found the ride crashy in any shape or form. Mind you, I would state that you are likely to feel a lot of the road, including imperfections, which some may like, but it may prove a bit wearing if you’re planning to drive this a long distance. Compared to the Ceed hatchback and Sportswagon, the GT sits 5mm lower, featuring stiffer springs as well as a different suspension setup. Kia took this area very seriously, and as such, an extra 6 months was spent developing the suspension geometry , with the help of Albert Biermann, the chap who used to run BMW’s M division, no less.

This should mean the ProCeed GT should be pretty good when the going gets twisty. This car may not be the smallest car going, but even so, it certainly makes a good case of itself in the corners. Thanks to the Pilot Sport 4 tyres, there’s strong grip in the corners, and the body roll is well controlled. The steering has got a good weight to it, even in Normal mode, and the feedback isn’t too bad. I would like the rack to be just a tad quicker, though, if I’m going to be fussy. Whilst I’m speaking on a more fussy nature, I’d say the brakes don’t inspire as much as confidence as I’d like them to. The initial dab doesn’t offer much feedback or stopping power, so you may find you need to modulate the pedal more than you first thought. Actually, as it happens, I had a similar complaint in a Stinger GTS I drove last year. Apart from those small complaints, the ProCeed GT is a decent companion for when you want to push on.

What about the 7-speed automatic?

As I mentioned earlier, this car can only be had with a 7-speed DCT automatic, which may be of some disappoint to some buyers. Yes, I get it, this car is designed to be a bit of a grand tourer, so an automatic makes sense, but it would be nice to at least get the choice of a manual. On the plus side, the automatic in this car does allow a slightly faster time to 60mph (previous model was 7.3 seconds).

The changes for the most part are smooth and responsive, but they aren’t the quickest in the biz. Would I call it slow? No, not at all, but if you looking for something that will be super slick, you may want to have a look at what the Germans offer. Some reviewers have complained about slow downchanges when you’re looking to crack on, and I can see where they are coming from, but I don’t think it should be enough to put you off. You can of course take control of the gearbox yourself by using the flappy paddles on the steering wheel, which feel well made and premium, thanks to their metal alloy design. The changes are quick enough, but as I said, it’s quite the slickest around.

What about the practical stuff?

This is a large car, so it should offer good space, shouldn’t it? I want to start in the rear, as some reviewers have slated the space back there, stating it’s on the tight side. Now, I’m 6’2″, and as always, the driver’s seat was set for me. I won’t lie, I didn’t have bucketloads of knee room and legroom, but I wouldn’t say it was particularly tight.

Headroom is another area that has attracted complaints for some, which to be honest, I don’t quite understand. Like the legroom, I will admit I didn’t have loads of headroom, but I’ve got enough, so I think the poor headroom reported by some is a little exaggerated. That, or I’m starting to shrink.

One thing that definitely isn’t shrinking, is the boot as that’s noticeably larger than the last ProCeed GT thanks to the new bodystyle. It offers 594 litres, which is 50% more than the Ceed Hatchback, but not quite as much as the Sportswagon. The opening to the boot is wide and practical, plus the load lip is low with no nasty step in to the boot. Better still, you have compartments underneath the boot floor where you can either keep things out of sight, or you can better organise your luggage.

If you need more space, you can of course fold down the rear seats to give you 1,545 litres worth of space, and the rear seats fold flat, offering better practicality. For those of you wondering, I’m afraid there’s no spare wheel, sorry.

Let’s finish in the front where, you’ll find a decent amount of cubbyholes. Yes, the door bins aren’t massive, but you can still fit a bottle of drink in them with a bit of space left over. You’ve got two cupholders in the middle, a little shelf and storage compartment here, a decent sized compartment under the centre armrest, a sunglasses holder, and of course a glovebox, which offers a decent amount of space.

How much will it cost to run, though?

On a combined run, Kia states that the ProCeed GT should return in 39.3mpg, and in my experience I came close to hitting that, getting around 37. In regard to CO2, the GT emits a respectable 133g/km, so for the first year of VED, you’ll be expected to pay £210. For those looking to use it as a company car, BIK rating for the GT is 30%. If you’re wondering about insurance costs, this car sits in insurance group 21A, and you shouldn’t have to worry that much about reliability, but don’t forget, you’ve always got that famous Kia 7 year warranty to fall back on.

The ProCeed GT comes with a good amount of safety features as standard, such as six airgbags, autonomous emergency braking, lane keep assist, high beam assist, driver attention warning, and hill hold assist. However, if you want a few more safety features you’re actually better off buying the GT Line S, as that offers lane following assist, speed sign recognition, blind spot warning, and a more advanced autonomous emergency braking system. The new model is yet to be crash tested by Euro NCAP, but it’ll be surprising if it doesn’t get full marks. I like the fact Kia has shaken up the ProCeed GT and been bold with the new car. I also like the car itself; it’s a good looker, it drives well, offers decent kit and a good amount of space. It’s not perfect, however. I would personally want an option for a manual gearbox, and I wish the ride was just a bit less busy. If this car was pushing out 100 more horsepower and was a bit more performance orientated then I’d be happy to put up with it.