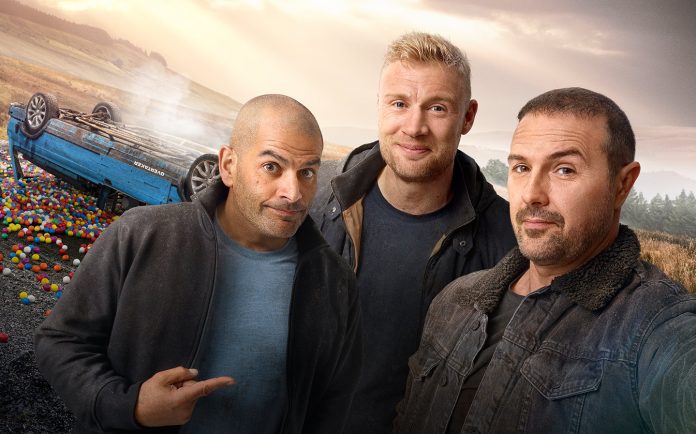 Tonight I had a choice of either watching some celebs kick a football around for Soccer Aid, or to watch the new series of Top Gear. Despite being a big football fan, the choice of which to watch would have easily been Top Gear in the past. Tonight, though, I actually gave Soccer Aid some serious thought.

However, I like to think I am a man with open mind, so I decided to give Top Gear, but I’ll be honest, I don’t think my expectations for a new series of Top Gear have ever been this low. The LeBlanc, Harris and Reid platform was really starting to gain traction in my opinion, but once again, there has been a shake up, following LeBlanc’s departure.

Let me set the record straight

Now, I want to make it clear – I rather like Freddie Flintoff and Paddy McGuinness; I think they’re both funny, entertaining chaps, however…they are NOT motoring journalists. Like many, I have the viewpoint that The Beeb have gone for the entertainment vote rather than appealing to petrolheads, although you could argue that’s the show that Clarkson, Hammond and May morphed it in to.

Anyway, on to the show

Paddy opens the show to introduce the new line-up before showing a juicy montage in typical Top Gear fashion. After that teaser of what’s to come, the trio take a trip down memory lane to revisit their first cars, which opens up a challenge.

Following stats that young drivers spend an average of £4,000 on their first car (mine was £900, in case you’re wondering), Harris, McGuiness and Flintoff are given the task of buying a car that was the closest match as possible to their first car. Once they had done that, they had to go to Ethiopia, naturally.

One of the first things I took away from the show was that the chemistry between Paddy and Freddie was every bit as good as what the BBC had reported, but if I’m honest, Chriss Harris did feel like a bit of a third wheel. I could well be over-reading it, or perhaps that was a deliberate angle taken from the production team? Yeah, I’m pretty sure I’m over-thinking things here…

Paddy is the first to reveal his tribute to his first car, and much to my surprise, it was a Mk2 Ford Escort – good choice lad. Harris is up next, presenting a classic Mini, which of course, leaves Flintoff. If you thought Paddy’s Mk2 was a turn up for the books, wait until see you what Freddie has – he’s only gone and bought a Boxster! From their start point, the northerners and the car journalist head toward the Simien Mountain Range, and on the way, Harris decides to stop off at a quarry for a race – like you do. This was the first real time to see how Flintoff and McGuinness handled themselves behind the wheel and without giving too much away, one did well, and the other didn’t. This led to one of the new guys donning a very ‘warm’ gift…

Still something to offer to ‘proper’ petrolheads

So far in this episode it felt like the shine was being taken off Chris Harris. Here you have a bona fide car journo knocking about with an ex-cricketeer and a comedian – no offence lads. However Harris shows that he can still walk the walk and present a proper, straight-laced car review, much to my approval.

He slips behind the wheel of the new(ish) Ferrari 488 Pista, and as usual, Harris does a pretty bang up job. I enjoyed the way how he pulled no punches when he was commenting on the car’s interior, using metaphors such as a”boney as an old donkey” and “medieval sex toy”. Ferrari may have been cowering behind the sofa, but I’m sure they would have been delighted with the comments Harris made afterwards as he slid the track-focused Ferrari around the Top Gear test track with gay abandon. As if that wasn’t enough, Harris then brings out the McLaren 600LT to play with, commenting that it may be cheaper and less powerful, but it’s no less of a car. Ok, so it loses the drag race, but there’s not much in it, and it’s clear Harris is enjoyed the car too much to car. This leads him to declare it’s the car he would have out of the two.

One thing I find odd is that we never got to see the cars go around the track, which seemed most unusual…Maybe LeBlanc took The Stig with him? After the ‘serious’ part of the show, the trio return to Ethiopia in their ‘first’ cars as they make their way closer to the ‘Afar Triangle’, the place where mankind is thought to originate from, and the trio’s finishing point. There was more banter on flow, but if I’m going to be honest, it struggled to hold my interest a little bit following Harris’ captivating review.

Things did get more interesting when another challenge was dreamed up following Harris stating that he could drive the cars with his eyes closed. This led Flintoff to find a runway, and to see who could cruise their cars closest to a designated cone. Sounds easy, right? Well, it’s not when you’re blindfolded…

There was a very clear winner for this challenge, and a very, very clear loser, whom received the ‘warm’ gift. After that bit of fun, Harris, McGuinness and Flintoff made their way in the to the salt plains of the Danakil Desert, where the going got tough, particularly for Harris who was being bounced around in his Mini like a bit of flubber trapped in a lift.

Flintoff’s Boxster also took a beating, some of which was thanks to Harris, but they all made it to the finishing point, rounding off what was a decent enough start to the series.

I need to be honest here, I enjoyed this series opener more than I thought I would, but I’m far from convinced. Seeing Paddy and Freddie alongside Chris as hosts seems almost alien to me. I think they personally did a decent job, and it must be difficult to fill such big shoes with such big pressure.

I look forward (I think) to seeing how the series develops, but I personally don’t think Top Gear as we know is still with us. The hard work put in my LeBlanc, Harris and Reid has been completely undone, and it looks as if it’s on a whole new direction. Will it prove to be a popular one, though? Time will tell…