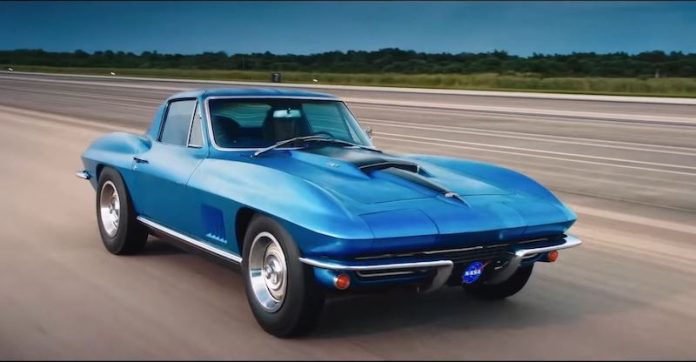 After the largely entertaining RV holiday special, this week’s episode returns to the famous TG tent and once again, the studio audience is present. Now before I really kick off the review, I want to give my thoughts on the studio audience. You may have heard, but for season 4 the production team will be ditching the tent, which of course, means ditching the audience.

I’d be sad to see the audience go, although I don’t think the audience has added as much value as it did on ‘old’ Top Gear, as Clarkson, Hammond and May don’t seem to get them involved as much. That aside, let’s delve in to this week’s show.

Hammond blasts around in a Aston

The show kicks off with a bang, as we join Richard Hammond at the Eboladrome with a very brightly painted Aston Martin Vantage. Hammond himself references the bright paint, joking that if your wee were the same colour, you’d need to see your local GP. There’s more important things than the colour, though, as Hammond sets out to answer the question. That is, whether it’s able to properly compete with cars like the Porsche 911. In this typically slick review – the cinematography was on point! – Hammond says that it needs to be more than “good for an Aston”, and it doesn’t take you long to realise that The Hamster rather likes the car. He didn’t like the indicator, however, although I think he mad a valid point.

Watching the review, it did make me wonder when he would drop in the Mercedes link, but low and behold, Hammond drops the bombshell. That bombshell is that this quintessentially British sportscar has got the heart of a German, an AMG heart. This, Hammond explains, is a good thing, plus the exhaust notes have been tuned to give the famous Aston burble. All-in-all, a strong review from The Hamster.

After a strong start to the show, we have James Mat talking to us about the famous moon landing in the sixties. Despite giving us a thoroughly good lesson in a very typical James May fashion, you do start to think where on Earth this is going – or may I should say where on the moon. May talks through the intrepid astronauts that were put forward for the space mission, and then explains that there choice of wheels was the Chevrolet Corvette. The reason being is because for them it was the perfect car to give them a sense of speed on the road. There was a Chevrolet dealer nearby as well, so that must have been pretty handy. However, due to the law of the government, the spacemen could not accept them in gifts, but not to worry, as the dealer had a very cunning way around this. He simply sold the cars on $1 leases – genius. The film grows progressively, taking us through the version of events step-by-step, and before you know it. May finds himself driving a very iconic car. Iconic, how? It belonged to none other than Neil Armstrong, a man that doesn’t even need an introduction. What I loved about May’s drive in Armstrong’s Corvette was the sheer emotion on May’s face, you could really see he honoured the moment and even looked to be close to tears of elation. Moving stuff, quite literally.

And then Clarkson ruins it

Now before I say what I’ve gotta say on Clarkson’s ‘review’ of the Citroen C3 Aircross I want to get something clear. I’m a BIG fan of Clarkson, despite his chequered history. I have all of his books, even the Hot 100 (anyone remember that?) and meeting him in person was one of the most surreal and fantastic experiences of my life. In fact, I still remember how much my legs were shaking when I met him, they were doing the full Elvis.

Anyway, let me get to the point. He finishes the show by doing one of his silly reviews. You may remember he did it on old Top Gear, when he was trying to appease a chap called Mr Needham. These tests included driving a Ford Fiesta of a marine’s landing craft, and driving a Renault Twingo off a ferry dock. This time, he takes a spin in the Citroen C3 Aircross, a car I’ve actually reviewed, so I was genuinely keen to get this thoughts. However, the film didn’t really tell me much because as part of the review he proves that it’s faster than itself (don’t ask) attempts to pull a ship, and he pulls a small pony in to the boot. I must admit, I found the gag about the disabled child to be in poor taste personally, but this is Jezza after all, you shouldn’t take everything he says too seriously.

Clarkson uses the C3 as a police car, and after chomping on a comically large baguette, he soon has to pursue a modified De Tomaso Pantera which had completed a mock bank job. I’ll be honest, a fair few of the gags didn’t land with me, and I actually found it a bit cringeworthy in places. However, I must admit, I found the off-road performance of the car pretty impressive, bearing in mind the C3 Aircross hasn’t for four wheel drive. so at least I could take something away from the review… The episode started off with strongly, with Hammond and May putting in a good effort in their respective films, but I’m afraid it was all let down by Clarkson’s shenanigans. I know he has done this sort of thing in the past, and to be honest, I’ve quite enjoyed it, but I think the C3 Aircross was a bit too far. It’s almost as if Clarkson was jumping the shark and to be it undermined the hard work his colleagues has put in to what was a perfectly good show up until that point.

Am I losing my sense of humour? Possibly.