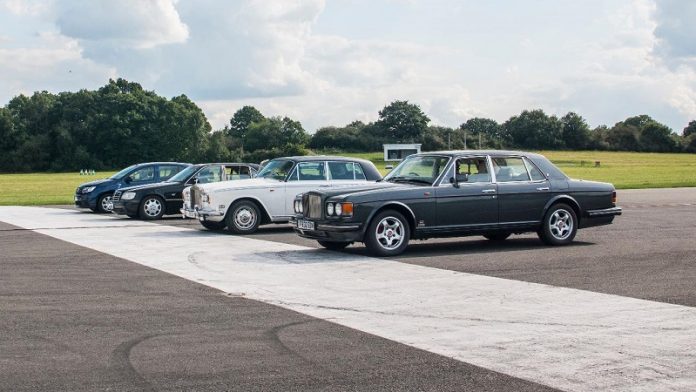 It’s Sunday evening, which means it is of course time for Top Gear. In this week’s show, the trio set out to prove that you don’t have to settle the dreariness that six and a bit grand can get you for a Dacia Sandero. To be brutally honest, this is not exactly a new concept as Richard Hammond and Jeremy Clarkson did a very similar thing on Top Gear a few years ago. All three follow a similar idea, by choosing old luxury cars.

Bang for your buck

We join Matt LeBlanc in choice of wheels, which is the majestic, but brutish Bentley Turbo R. It’s clear that the American has done pretty well, as he explains that everything on it works just fine, although that doesn’t last long. He does well to introduce the film, but not too long after he has started, he meets Rory Reid at a pub, allowing Reid to introduce his Rolls-Royce Silver Shadow, which he’s very pleased with, despite the issue with the never-stopping wiper.

That, of course, leaves Mr Chris Harris, whom to be honest, went for quite a boring choice. That’s because he opted for the Mercedes 600SEL, which is as fast as it is luxurious, but it just looked a little unassuming when parked next to his colleagues. This is a point they make to their esteemed colleague, prompting Harris to launch a rather scathing attack, stating that Reid’s choice of wheels was a ‘wedding car’ and that LeBlanc’s was the type to be use for an adult movie, murder or people trafficking.

After that harsh but entertaining outburst, the trio report to the test track for a set of challenges against the Sandero, The first of which is a race around the ‘Top Gear Real World Urban Driving Simulator’ – catchy name. After watching the Stig put in a strong performance in the Romanian hatchback, it’s time for Harris, LeBlanc and Reid to have a go.

What could possibly go wrong?

This made for good entertainment, especially when you consider how large their cars were in comparison to the Sandero. Harris opts to go first, taking his jumper off in a desperate bid to save weight. His run is pretty wild but effective, which can be more than said for Reid’s attempt, although this Silver Shadow had a tighter turning circle than I was expecting. LeBlanc? Well, his car pretty much s*** itself towards the end of its run… This caused a lot of

After failing to beat the Sandero in that challenge, the next test is a drag race, but with a difference. To see just how shot the tracking are on their cars, the trio have to race against the Stig in the Sandero, only they aren’t allowed to steer. The results are pretty hilarious, despite the fact that it looked rather sketchy at times. After another win going to the Sandero, the trio then have to race said car around the test track but before they do, each on of their cars goes on the dyno. The reason for this, is that they can work out how far behind the Sandero they have to start. Because Reid’s Silver Shadow has as much pace as a snail’s shadow, he gets to start the nearest, then it’ LeBlanc and then Harris.

Were any of them able to beat the Sandero? Well, have a guess. After that third bout of failure, the TG boys get told they need to prepare their cars for an endurance race at Silverstone. Rather them than me…

TG sticks with ‘Star In A Reasonably Fast Car’

Regular viewers may note that so far on this series, I’ve made no mention to the ‘Star In A Reasonably Fast Car’ segment. There’s no real reason for this, mainly due to the fact that I’ve not really had the room in my articles to do so. Whilst The Grand Tour seems to have binned their celebrity segment, Top Gear has kept the SIARFC segment and I’m glad as it breaks the show up nicely. Don’t get me wrong, it can sometimes feel a bit pedestrian, but I don’t think Top Gear should be in any rush to scrap it. Oh by the way, Matt Baker was the star in tonight’s show…

After Matt Baker set a respectable time around the Top Gear track, it’s time to go to a different track – Silverstone. We rejoin Harris and Reid with their cheap luxury motors, which have been prepared for an endurance race. Harris goes for the famous ‘Red Pig’ livery, whereas Reid goes for a look that would make the ostentatious drug dealer think it may be a bit ‘too much’. No matter, though, as Reid is clearly pleased with his Silver Shadow’s transformation. But hold on? Where’s LeBlanc? After his Turbo R failed in spectacular fashion, viewers are left to see whether or not he would turn up. He did, although it wasn’t really the same car, as so much had been replaced, it may as well have been Trigger’s broom (that’s an Only Fools and Horses reference, in case you weren’t aware). Nevertheless, the three are ready and primed for action, with Harris setting lofty ambitions to finish as high up as possible.

The trio combined end up qualifying 70th…out of 70 teams. It seems they have quite the mountain to climb, so they start with their best foot forward by sending out Harris in his 600SEL first. He soon dispatches Fiesta STs, MX-5, and Pumas like no-one’s business and it all looks rather promising. Things start going wrong though, as he loses a wheel, LeBlanc loses his brakes and Reid, well he runs out of fuel thanks to dodgy gauges.

Thankfully, they do have a back up…

Tonight’s show was a very enjoyable one, and I really enjoyed the camaraderie between the three presenters. It’s a pity that it won’t last much longer, though. The only thing I would have liked to have seen done differently for this episode were for the three to choose a more varied choice of car, as opposed to all choosing high-end luxury cars.

However, that may have made the episode less entertaining, but £6,000 or so can get you some pretty decent sportscars in that budget.