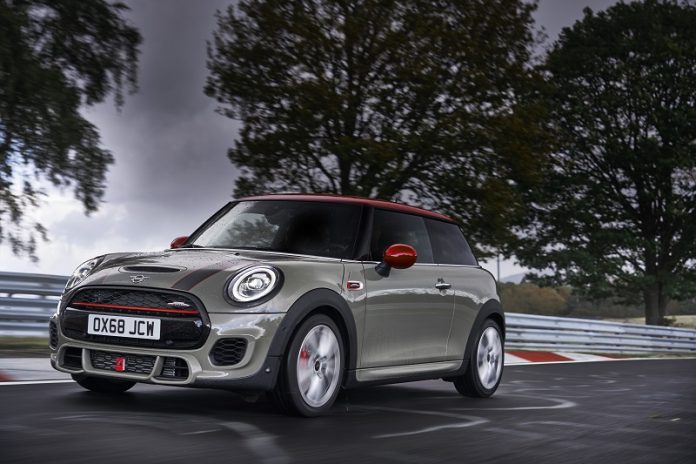 There was once a time where the Cooper S was the most potent Mini money could buy, but that all changed when the John Cooper Works was unleashed on the world. The garden variety Mini was recently given a facelift, meaning that the JCW variant would eventually be given the same new set of looks. Today, Mini has revealed the specification of said car, which will be available to order from January the 18th with prices yet to be announced. Well for starters, you get a 2.0 litre four cylinder petrol engine with twin turbocharging, which kicks out 231hp, making it the most powerful Mini to date. Well, the most powerful one you can get from Mini itself, don’t forget there is the Mulgari version, which pumps out 280hp (in a Mini?). This means, this little pocket rocket will reach 62mph in just 6.3 seconds if you go for the Hatch, or 6.6 seconds if you would rather have the wind-in-your-hair driving that the convertible offers. In case you’re wondering, those stats are based on the 6-speed manual version – there’s an 8-speed auto if you don’t fancy working your left leg. In order to keep the emissions people happy, the new JCW will be fitted with a particulate filters in the exhaust system. In case you’re really bothered, the CO2 emissions range from 140g/km to 162g/km, depending on which model and gearbox you go for, of course.

Minis can get pretty pricey if you go too mad with the options list, but thankfully the JCW does come with a decent amount of standard kit. Of course you get your usual goodies of infotainment, climate control, cruise control, etc. but the JCW now offers a choice of 17″ alloys, leather sports seats as well as Piano Black exterior and interior trim. The new Mini John Cooper Works will be available to order from the 18th of January, with prices yet to be announced.