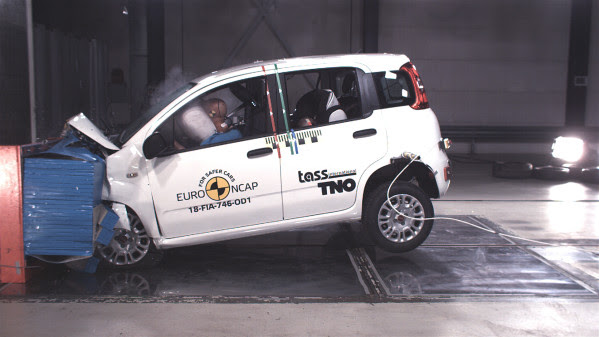 Last year marked a record for FIAT, but not the sort of record that the longstanding Italian carmaker would be proud to parade around the streets of Turin. That’s because its aging Punto was the first ever car to be given zero stars from Euro NCAP. If that wasn’t bad enough, the Panda has now been given the same fate following the latest batch of crash tests.

Oops, I did it again

The Panda recently received a facelift, but that wasn’t enough for it to be given the same fate as the Punto as it achieved a rating less than 50% in every category, making it one of the lowest rated cars that has ever had one of Euro NCAP’s dummies slipped into. Worryingly, child occupancy was scored at just 16%, which is significantly below the industry average of 79%.

This will prove to be startling news for potential buyers looking towards the Panda as a family car, although adults will fare better thanks to a score of 45%, although that’s not exactly the score of the century (it’s also lower than the Punto). Lack of chest protection for rear passengers is one of the factors of the zero mark as is the lack of protection for whiplash.

Matthew Avery, Director of Research, Thatcham Research comments, “Most troubling is that the FIAT Panda is seen as a good choice for young drivers and fledgling families. But the only safety technology fitted were seatbelt reminders and the rear system failed to meet requirements, so wasn’t even rated. Where budgets are tight, consider a safer small car second-hand, like the five-star SEAT Ibiza.

“Carmakers across all categories have responded positively to the more exacting tests brought in by Euro NCAP this year, especially those that assess crash avoidance technology. As the bare minimum, a standard-fit Autonomous Emergency Braking system should be available with the FIAT Panda. This is especially important since the car offers so little protection in the event of a collision. These shocking Euro NCAP test results demonstrate an inconsistent commitment to safety, as FIAT has produced four and five-star cars in the past.”