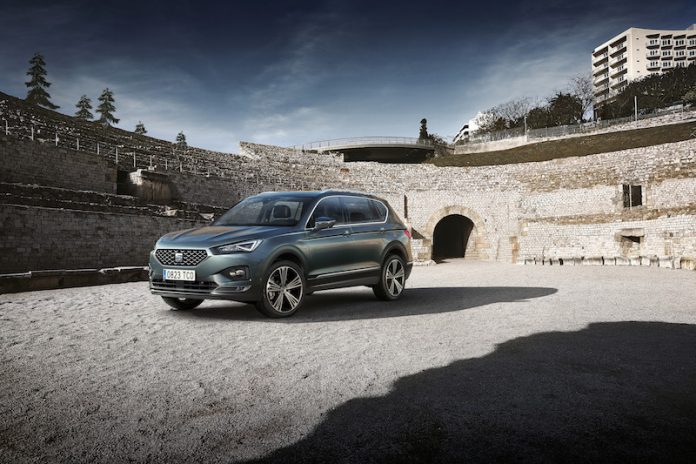 For a brand that had never made SUVs before, it’s safe to say that SEAT has got more than beginner’s luck. Ok, ok, so the Spanish brand has the advantage of being part of the Volkswagen Automotive Group, but you get my point. Following the Ateca, the debut SUV, and the Ibiza-based Arona, the time has come for SEAT to unveil its third model, the Tarraco.

Heading in a new direction

One of the key things about the new Tarraco, is its the first SEAT model to display the future of the brand’s design language, and if I’m honest, I’m not sure on it. That front grille looks a bit similar to an MG ZS, and I wouldn’t really call that a compliment. I wouldn’t say it’s an ugly car, because that would be untrue, but it’s not as pretty as the Ateca or the Arona if you ask me. Then again, looks are subjective, so let’s crack on with the rest of the car.

SEAT states that the Tarraco has been built to blend excitement as well as functionality, so as such, buyers will be able to choose from either five or seven seat models. To help with the excitement part, the Tarraco will be available with the brand’s Dynamic Chassis Control (DCC) to offer a sporty drive when you want it, and a more comfortable ride when you want a more mellow experience. Not many large SUVs can pull off the whole dynamic-driving-thing, so it’ll be interested to see what SEAT can muster. Going on sale at the start of 2019, the Tarraco will be available with four turbocharged engines – two petrol and two diesel. The petrol contingent is represented by a 1.5 litre engine producing 148bhp, and a 2.0 litre which offers 187bhp. The 1.5 is front wheel drive only, with power fed through a 6-speed manual gearbox whereas the 2.0 litre is mated to a 7-speed DSG and  SEAT’s 4Drive all wheel drive. Seeing as SUVs are likely to be bought as a family car, buyers will be looking for models that offer a good amount of safety kit to protect their loved ones. The Tarraco should be able to meet such high and important demands, as it will be available with system such as lane assist, front assist including bicycle and pedestrian detection are standard for European models. What about price? Trim levels?

It’s still a bit too early for that, but SEAT has stated that the Tarraco will be available in just two trim levels, SE and XCELLENCE, although I would be surprised if that range expanded with time. Price is yet to be announced – as has full kit and specification – but more details will be released nearer to the car’s release in 2019.