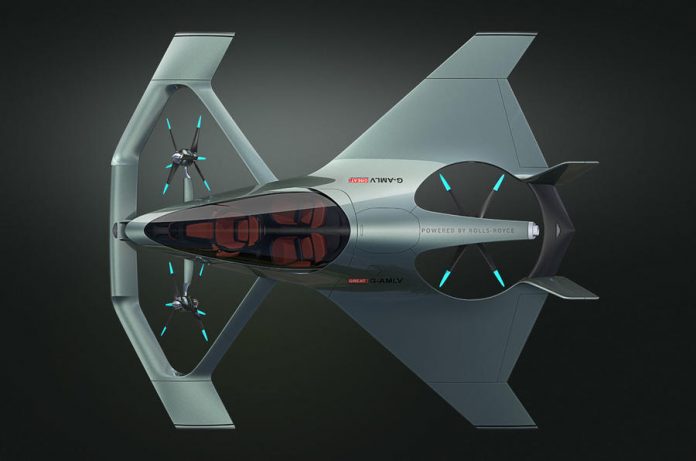 Forgive us for obsessing about high-powered cars that are as much works of art as they are machines. One of our favourites is the Aston Martin Vulcan AMR Pro, an upgraded version of the Vulcan, the brand’s self-acclaimed “wildest car ever.” Aston Martin has long been pushing the envelope in terms of making exquisite, turbo-charged cars, and the Vulcan and Vulcan AMR Pro are just two of the company’s latest. But even these two will have nothing on what is currently being developed by the Warwickshire-based carmaker: a flying sportscar.

The flying car being designed by Aston Martin

While it may seem like an idea for a Bond film, Aston Martin is indeed developing its own flying car. They have released a video (see below) of their vision of the future: the Volante Vision. The sleek-looking concept (flying) car was unveiled at the 2018 Farnborough Air Show. Aston Martin is not alone in this ambitious undertaking. The BBC reports that they have partnered with Rolls-Royce and are getting help from engineering experts at Cranfield University. The hope is that a prototype will be ready for the Farnborough Air Show in 2020.

James Stephens, Aston Martin’s director of global government, is confident that the company’s vision of a flying car will soon materialise. But he emphasised that it will not come cheap — anywhere between £3 and £5 million.

Don’t be surprised, too, if it makes an appearance in a future James Bond film as an Aston Martin spokesperson hinted about that possibility to Business Insider. The superspy has ridden his fair share of Aston Martins, most memorably the Aston Martin DB5, which we put at the top of our ‘Aston Martin Stunners’ list. Like Aston Martin, James Bond is an important part of British culture. The appeal of film series is that it appeals to fans of thrillers, cars, and a certain style of living. Featuring previews of exquisite cars like the DB5, the V12 Vanquish, and the DBS V12, has made the films a must watch for car enthusiasts. Many different companies also look to tap into the spy’s appeal. This ranges from official Aston Martin/007 merchandise to more unusual links to the series. Digital gaming providers Slingo have several games based on the spy genre, including a James Bond-inspired tongue-in-cheek game called Agent Jane Blonde. All of these tie-ins (both official and those inspired by the series) increase the film’s fanbase and help expose companies like Aston Martin to more potential customers. The Bond brand is in many ways an industry in its own right.

It is likely that the Volante Vision will make an appearance in a future film and we will get to see how it looks on the big screen. Even if Bond doesn’t get his hands on the prototype of new flying car, we can’t wait to see if Aston Martin follow through with their plans.