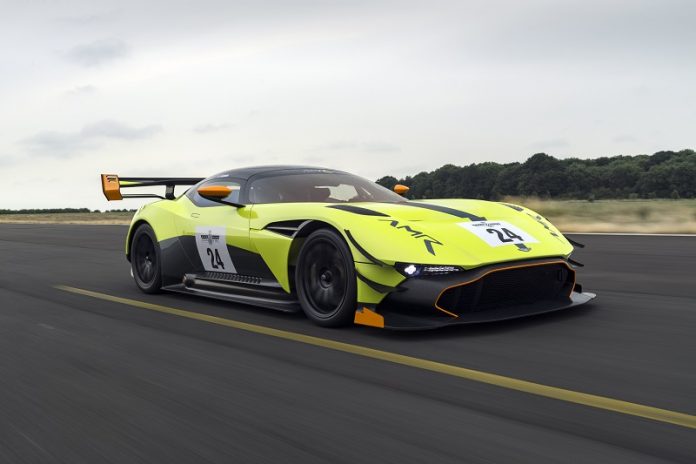 The Aston Martin is far from a shrinking violet – in a world where hypercars are seeking out electricity to boost power, the Vulcan relies only on a 7.0 litre V12 to get by. It’s completely raw, the brakes squeal under hard use and you get a sense cars like this are on they’re way out. Only they’re not.

Aston Martin has announced that its self-acclaimed “wildest car ever” is to be giving the AMR Pro treatment to make it even more savage. AMR stands for Aston Martin Racing, in case you weren’t aware, so that gives you some idea of what to expect… Now, the standard Vulcan is hardly a couch potato, it has over 820bhp and it will be able to hit a top speed well over 200mph. So then, what could the British brand possibly do to get more out of this limited edition beast?

Well you won’t get any extra power – not that it’s lacking for it – instead, tweaks have been made to the race car’s aerodynamic profile, plus the AMR Pro Vulcan has shed a bit of weight. Starting with the aero changes; louvred panels have been added to the front wheelarches as well as large front splitter, and a pair of dive planes. At the rear you’ll note there is a new spoiler, which is so large, I’m pretty sure it’s bigger than some counties.

All of these new features combined mean that the AMR Pro is able to produce 4,100Nm of downforce as opposed to the 3,150 offered in the standard Vulcan. Not only does the Vulcan AMR Pro dominate its lesser sibling in regards to downforce, it also dwarves the 3,104Nm produced by the Le Mans winning Vantage GTE model. The AMR Pro is also a tad lighter – 5kg to be exact – thanks to a weight reduction of the engine cover. Aston Martin Racing works driver, Darren Turner, said of the Aston Martin Vulcan AMR Pro: “I’ve been fortunate to drive the Aston Martin Vulcan throughout its development programme and at the numerous customer events held since the cars were delivered. It’s an incredible car in every respect – looks, sound and of course, performance. We worked hard to ensure it’s not a monster to drive, so it was important the AMR Pro upgrade remains true to that objective.

“By increasing the overall level of downforce front and rear, but also improving the balance of the car we’ve done just that. Together with the shortened gearing, which makes it even more punchy when you accelerate through the gears, the Aston Martin Vulcan AMR Pro feels more agile and responsive to steering inputs. When you get the aero working through a fast corner it really is an unbelievable feeling. I can’t wait to see the customers’ faces when they experience it for themselves!”

The new Vulcan AMR Pro will debut at this year’s Goodwood Festival of Speed and customers will be able to get their standard Vulcans upgraded now, with expected completion times starting from autumn this year.