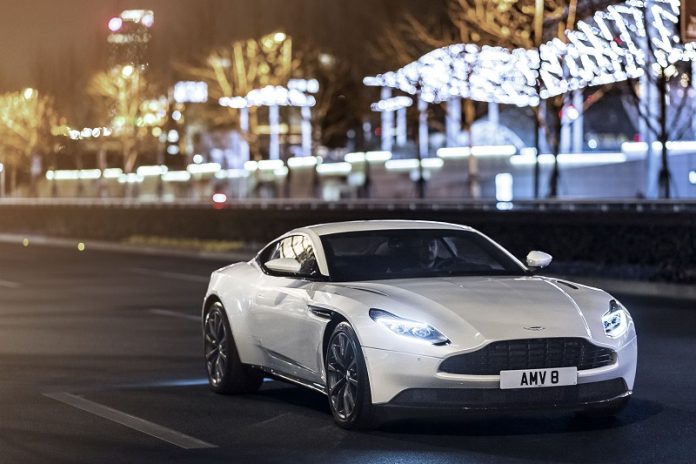 Aston Martin is quite possibly the quintessential British brand – now though, it’s been invaded by the Germans. It’s ok though, as it now means the DB11 is now available with the thumping 4.0 litre V8 borrowed from the AMG department at Mercedes-Benz.

Originally launched with Aston’s own V12 engine last year, buyers will now have the choice to choose a V8 version of the British brand’s new GT. As mentioned above, it’s a Mercedes AMG-sourced 4.0 twin-turbo litre V8, which offers a very respectable 503bhp, with 675Nm of torque. But what does this mean in regards to performance? Well, the German block is able to propel the DB11 to 62mph in four seconds flat and the top speed is 187mph, only 13 behind its V12 sibling.

This power will be fed to the same 8-speed ZF automatic tranmission used in the V12 model and from personal experience, I have to say it is very good indeed. There will of course be some differences between the two models, so the keen motorist should be able to tell them apart. The V8 version receives vents in the bonnet, as well as different alloys, plus the car has been tweaked underneath the skin. The V8 engine is of course lighter than the V12, plus it takes up less space. This means the car is now 115kg lighter, giving it a better centre of gravity, which is good for handling. The V8 DB11 will also be more nimble and more fuel efficient, although you don’t buy a car like this so save on petrol do you? As well as visual design changes, the V8 version has been given a bespoke air intake, a new ECU, plus changes have been made to the anti-roll bars, springs, dampers, ESP software, geometry and suspension bushings. Aston Martin President and CEO, Dr Andy Palmer said of the V8-engined DB11: “The DB11 is the most complete and sophisticated car Aston Martin has ever made. Now, with this new V8 engine option we have broadened its appeal by offering a car that will bring the DB11 to more customers around the world while still blessed with the exceptional performance and memorable character that sets Aston Martin apart from its rivals. “Having driven the car during its development phase, it is not just the engine that has changed the character of the car, but also the resulting dynamic changes to create a remarkable GT car with its own distinct personality from the V12.”

The new V8 DB11 is available to order now, with prices starting at £144,900 and deliveries expected towards the end of the year.