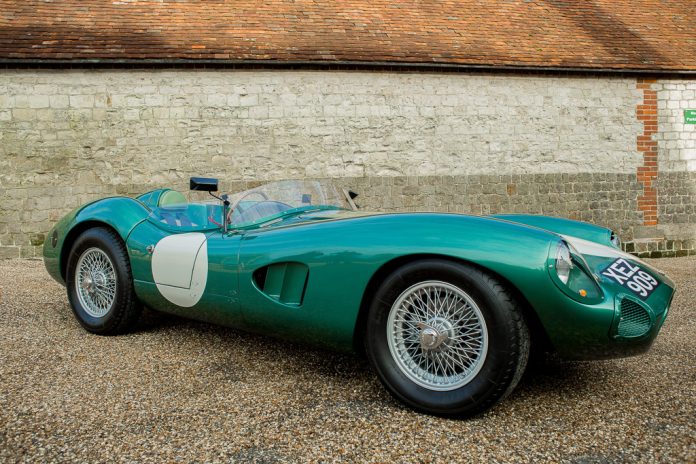 It’s quite a stunner, isn’t it? It may look like an original model from the 50s, but this is in fact a recreation. But you would have already known that if you read the title. What you may not have realised, is that this very car is the end product of a company called Evanta. At time of its creation – which is as near to the original as possible – the company was owned by Wheeler Dealers’ Ant Anstead.

Over 150 photographs of this classic racer were used to help build its modern day version, with special attention paid to the body and the famous Aston Martin Racing Green. Underneath that classically styled body lies a high compression 4.2 litre with de-Dion rear suspension and coil over front wishbones at the front, with 16” wire wheels fitted with special period reproduction Michelin tyres. The cabin is also as close to the original car as possible, with several attempts made to get the hand-painted crackle finish dashboard just right. To retain authenticity, the dash has been sprinkled with period dials, and the seats have been made with same materials as the original cars.

Believe it or not, but this is not the first time that Silverstone Auctions has offered this car. The company first placed this car under the hammer back in 2014 before facing the hammer once more in 2016 where it was sold to its current owner, a high profile celebrity petrolhead. Silverstone Auctions has slapped an estimate of this car which is between £85,000-£100,000. Compare to this to the £20,000,000 asking price for the real McCoy and this car quickly looks like a bargain. Ok, so it’s not the original, but I won’t tell anyone if you don’t…If you happen to to fancy this motor (you never know), then be sure to check out Silverstone Auctions’ May sale on the 19th at the Silverstone circuit.