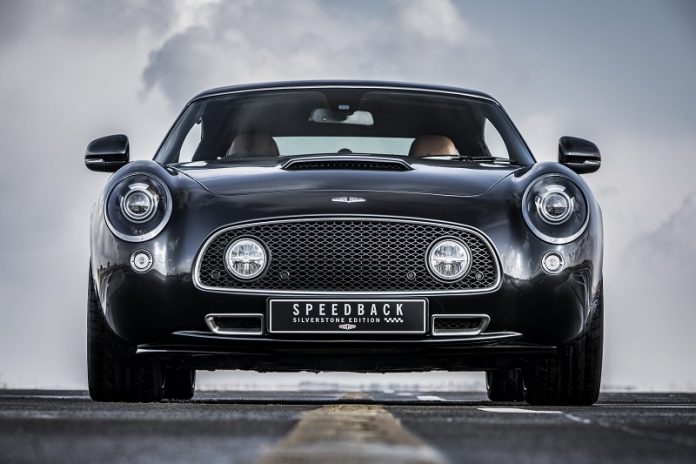 David Brown Automotive may not be the most well-known name in the motor industry, but already its produced the beautiful Speedback GT, and more recently, the Mini Remastered. This week at the Geneva Motor Show the bespoke British brand has lifted the covers another model – the Speedback Silverstone Edition. Granted, it’s a bit of a mouthful, thankfully it’s more pleasing on the eyes than it is on the tongue.

Ah, that’s a good question you ask. Well, it’s all to do with the brand relocating its HQ and coachbuiling facility to, yes you guessed it, Silverstone. The new model draws inspiration from the dawn of the jet engine as well as classic racers from the 1960s – what a combination! David Brown Automotive has described the Speedback Silverstone Edition as a “pure performance Grand Tourer for the 21st Century”.

What Are The Specs?

Underneath the retro-inspired bonnet lives a 5.0 litre twin-scroll supercharged V8 engine, which is good for 593bhp with 766Nm of torque. That means this ‘modern classic’ is able to hit 62mph in 4.2 seconds before hitting an electronic buffer of 155mph. This power is fed through to the rear wheels via a 6-speed ZF automatic transmission. Compared to the Speedback GT, the Silverstone Edition features upgraded suspension to offer better handling as well as better comfort.

The Silverstone Edition also features Dynamic Stability Control, performance brakes and a open rear diff, which David Brown states makes the car “a retro-inspired, driving-focused Grand Tourer for the modern age.” The hand-made body is made from aluminium, and features extended side skirts, front spoiler, and a rear diffuser.

Whilst I’m on the topic of the rear, let’s mention the exhaust pipes, which have been inspired by jet engines, and I have to say they look pretty good. Step around the side the of the car you’ll find 20″ ‘Afterburner’ alloy wheels, and even the paintwork is called ‘Fly By Night’. Inside the car you’ll find jet-inspired air vents which can be enjoyed from a pair of body hugging sports seats trimmed in leather.

There is also a smattering of alcantara too, so needless to say, the Silverstone Edition ought to be a pretty good place to sit. However, don’t think it’s all retro and no go, as it’s able to offer modern conveniences such a fully integrated infotainment system, Bluetooth connectivity, sat nav, and a 7.1 channel Bowers and Wilkins sound system. This All Sounds Jolly Expensive

Yes, I’m afraid it is. Are you sat down for this? Good. The Speedback Silverstone will cost you a grand fee of £620,000. Oh, I have more bad news for you – only 10 will be made. Well, I’ll guess we’ll just have to enjoy the pictures…