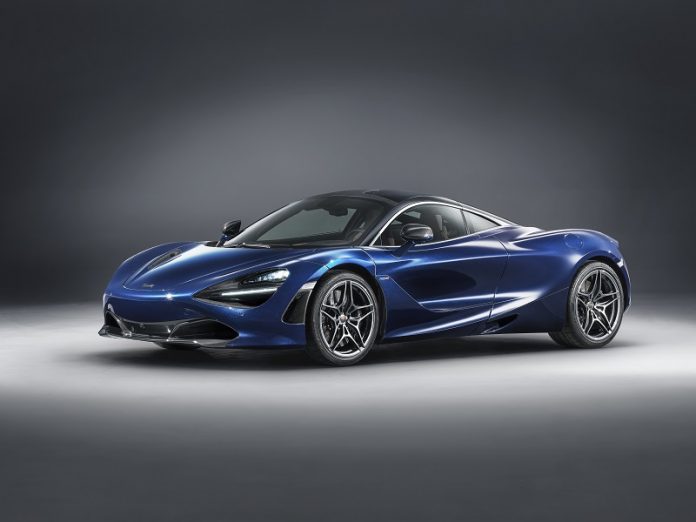 Although the McLaren 720S has been with us for about a year or so, it feels like it’s been around for quite some time. Well, it does to me anyway. Since its launch, the looks divided opinion but I’ve always liked it, especially the MSO Velocity version. Remember that one, the one with the two red paint finish and the gold alloys?

The reason why I mention MSO (McLaren Special Operations), is because a new 720S model has been created in a bespoke configuration, and once again, the Geneva Motor Show is where it’s being debuted. It’s not quite as striking as the Velocity model, but it does look rather resplendent in an exclusive Atlantic Blue paint finish. This shade has been newly developed and is contrasted with Dark Palladium exterior finishes. There’s also carbon fibre too – naturally – as well as Zircon window surrounds, and black brake calipers with McLaren – exclusive to this model. Inside you’ll find two seats trimmed in Tan Saddle leather, which has been put together using Slate Grey stitching. The cabin also features Carbon Black leather and grey alcantara accents, plus even the floor mats are bespoke. As well as bespoke styling, the MSO Atlantic Blue comes with a fair amount of goodies, but I suppose it ought with a price north of a quarter of a million pounds – £281,260 to be exact. As well as being able to the enjoy the 710bhp twin-turbo V8, this MSO version comes with the Track Pack, which offers telemetry and camera system to get the most out of track, plus it also comes with a 360 degree Park Assist system to help with parking and moving in tight spaces. There is also a nose lift system which should make urban driving less daunting, and there is a Bowers & Wilkins 12-speaker audio system, which is bound to please audiophiles.

What do you prefer though – this, or the Velocity?