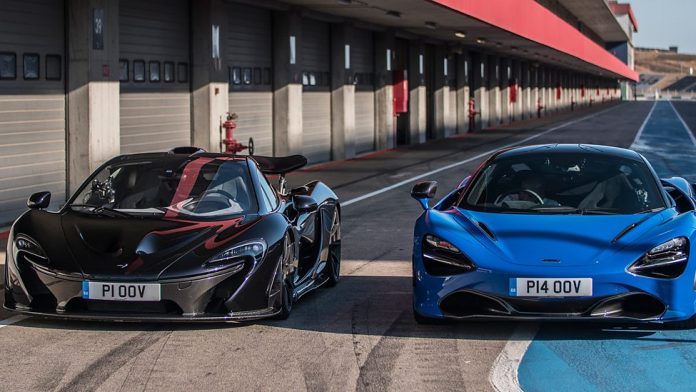 Yes, you did read Bigfoot in the title, but I’ll get on to that in a bit. Apart from trying to find infamous Bigfoot, Chris Harris pits the new McLaren 720S against the P1, Rory Reid dreams up a mental challenge with a Ford Fiesta and a Suzuki Swift, plus comedian Lee Mack has a go in the reasonably fast car. Sounds a decent show then, let’s crack on and dissect it.

The show starts strong as Chris Harris heads to Portugal to drive the new McLaren 720S and as usual, he delivered the piece with a great mix of information and entertainment. The cinematography is top notch as well, making the whole film compelling. This sort of film makes a strong case on why, as a true petrolhead fan, Top Gear could well be edging past The Grand Tour. What do you think? That’s a debate for another day though. Back to the film, I have to say, it was captivating, and it makes me ashamed that I’ve never got around to watching any of Harris’ pre-Top Gear work. He talks about how the car is engineered and giving out all the nerdy details, but without being boring, and it was good to learn things about the car that I didn’t know before. An example of this is when he was talking about the amount of work and research that had gone in to the suspension set up, describing the people behind as ‘Doctors of suspension’.

Taking the car on to track, Harris goes on to explain just how the 720S is, which is nothing new, but it’s still interesting all the same. However, all of a sudden, the McLaren P1 joins the party, and all of a sudden it becomes a group test. Quickly, it be becomes evident that Harris intends to see how close the much cheaper, less powerful 720S is able to get to the car dubbed ‘The Widowmaker’. I won’t spoil it for you, but my word was it close.

Next up, Matt LeBlanc talks about testing some off-road toys and before you know it, we’re heading away from the UK once more – this time to the US of A. LeBlanc starts the film in the mind-boggingly large Ford F650 Supertruck, a name that it certainly deserves. Attached to this 5 ton monster is a trailer filled with yet to be revealed goodies.

First though, the Yank picks up his Harris hand-luggage who is staggered by his colleague’s choice of wheels. This is where the illusion is dropped, as Harris believes they are in the American forest land for a spot of camping, and then LeBlanc lets the cat out of the bag to reveal that the pair of them are actually looking for Bigfoot, much to Harris’ disbelieve.

Now, I saw a comment on Twitter after last week’s show stating that the chemistry was false and that it felt over-scripted. Well, I would like to say that I disagree, as I feel as if the banter between LeBlanc and Harris is organic and genuine. Although the film is a bit of a random one, it does provide decent entertainment, especially when the first off-road vehicle came out – the Russian-built SHERP.

Here we have what Harris describes as a ‘Tonka Toy with the 747 wheels’, which is a very fitting way of putting it. The pair of them then head in to the woodland to ‘find’ Bigfoot, whilst discussing the SHERP, which not only has massive tyres, but a grand total of…45bhp. Apart from Harris getting it stuck on a big rock, this thing looks to be unstoppable, plus it can even drive on water.

Seeing as this method doesn’t work, LeBlanc and Harris swap the SHERP in for electric motorcross bikes, which looks fun but also terrifyingly fast. LeBlanc, who is clearly the better rider out of the two states that they need to get high in to the mountains, which of course prompts a race. No prizes for guessing who the winner is though.

Comedian Lee Mack was the guest on this week’s Top Gear and as expected he brought some decent humour, but sadly there wasn’t much talk about cars. He did, however, ask Matt LeBlanc if he would be free to appear in an episode of Not Going Out. This was funny, but also a bit cringeworthy if you ask me, but never mind.

On to the lap, and judging by the practice, it wasn’t likely to set any records. Well maybe for the slowest time. He was so bad, that my wife and I even wondered if he knew how to drive, but Mack revealed that he had passed his test on the second time of asking – God knows how. The actual lap isn’t much better and after what feels like an eternity, he crosses the finished line.

A City Car Test With A Twist

Rory Reid takes over, stating that top speeds and 0-62 times in city cars are not important, which I’m sure we would all agree with. However, what I don’t agree with, is that fact that the Ford Fiesta and the Suzuki Swift are not city cars as they are in fact superminis. Yes, I know, this is incredibly pedantic, but I felt it needed to be said.

Right, now I’ve got that small – but important (well to me anyway) – moan out the way, let’s talk about Reid’s ridiculous test. Cut to the Top Gear test track and a Fiesta and Swift that have been blacked out. Why I hear you ask? This is because Rory Reid and Chris Harris intend to race them backwards, relying on the reversing cameras alone.

Immediately, my wife predicts that they are going to crash. Women’s intuition proves to be right as Reid careers his Swift in to the front of Harris’ Fiesta, causing a very audible crunch. Interestingly, the Fiesta looks to be undamaged, but the same cannot be said for the Swift, which has a sizeable dent in it. That’s not the only thing that was dented as Reid’s ego took a knock when he lost the race. The one that he invented…

Up, Up And Away

We head back Stateside to re-join the hunt to find Bigfoot, or as Harris described it, the ‘Invisible Gorilla’. It’s time for the boys to step it up a notch though and they drag out two ATVs, one which is called the Skyrunner. Why is it called the Skyrunner? Well, that’s because it flies. Yes. Really. Harris joins ‘Stewart’, the Skyrunner’s pilot, which LeBlanc jumps in to the Can Am Maverick. They head to a location where one of the motion sensors has been set off with Harris taking the high road – well high in the sky anyway – and LeBlanc keeping all four wheels on the ground – mostly. The cracking shots continue, and then all of a sudden they find ‘a creature’ and give chase. Is it bigfoot? Well you’ll have to watch out.

It was a bit of a random film if I’m honest and for the most part it was entertaining, but there were some times where I felt it wasn’t quite engaging me as a viewer but the 720S film alone was worth the watch.