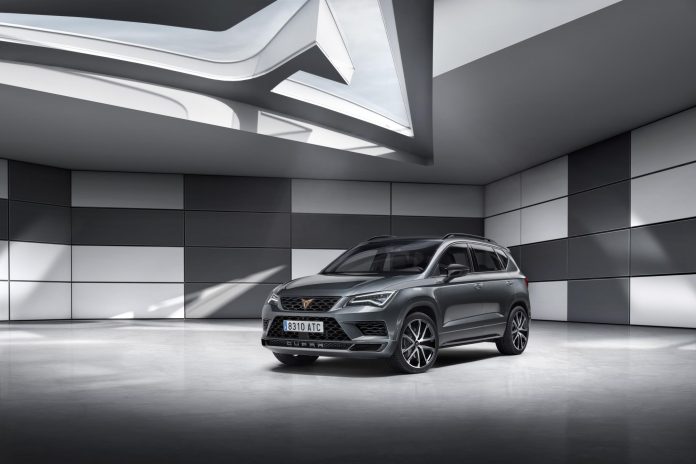 Given the fact that leaked pictures of the supposed new Ibiza Cupra (sorry, Cupra Ibiza) has been leaked on social media, you’d be forgiven for expecting it the model to debut the new brand. But no, it is in fact the Ateca, the brand’s first ever SUV. The new Cupra TCR has also been revealed, but I’ll come to that in a bit.

SEAT has described the Ateca as the “perfect car” to launch the Cupra brand which is an interesting statement. Think of Cupra and I would imagine you would think of the Ibiza and the Leon, both of which are hot hatchbacks – although the Leon is also available as an estate. So, to launch the new brand with an SUV is rather bold, not that I think there is anything wrong with this, I just find it…interesting.

What Has It Got?

A fair amount of poke for starters. Fitted with the same engine that’s used for the Leon Cupra 300, it’s a 2.0 lite turbocharged unit that offers 300ps, or 296bhp if you prefer it in old money. This power is mated to four wheel drive as well as a newly-developed 7-speed DSG gearbox. All these components combined mean it’ll hit 62mph in just 5.4 seconds and it will continue until it hits a Germanic top speed of 155mph. Not bad for an SUV, eh?

The 4Drive system is able to offer no less than six driving modes to meet the needs of the driver’s moods or the current driving conditions. These modes are; Normal, Sport, Individual, Snow, Off-Road and, of course, the CUPRA mode. As you can imagine, the driving sensation becomes more immediate once slipped in to the latter mode and Cupra says that the noise is more “refined”. Not entirely sure what they mean by that, but as long as it sounds good, I don’t care. There also also adaptive suspension as well, which further changes the character of the car.

As it’s a Cupra, it needs to look as sporty as it drives, and thankfully I reckon the Ateca ticks these boxes. At the front you’ll find a honeycomb grille – almost a must for any sporty car – and within there is the brand’s new logo, which sits proudly like a trophy upon a mantelpiece. There are plenty of black details splashed on to the exterior and the more aggressive body sits on 19″ diamond-cut alloy wheels. At the rear there is a chunky roof spoiler as well as quad exhaust pipes – nice. Inside, there is more alcantara than you can ever wish for, which is complimented by grey stitching, gloss black details and carbon fibre trim. There is also an aluminim plaque that bears the Cupra logo, so you know you’re not in your regular Ateca. There are also the obligatory sports seats, plus there is a flat-bottomed steering wheel trimmed with leather – another obligatory detail. For those wanting more, there are optional extras such as the Carbon Fibre Exterior Pack, which as the name suggests, adds more carbon fibre details to the outside, plus you can specify a similar pack for the interior. Cupra bucket seats will also be an option, but not until 2019, and there is a performance pack 18″ 18” Brembo performance brakes in black for better stopping power. This is to be the brand’s first ever race car and the brand’s first effort in the motorsport arena. Based on the Leon, it will compete in the 2018 TCR series, but of course it’s a fair bit different from the standard car. The TCR features a different body, complete with Cupra badges along with copper details and as well as an ECU with adapted software to comply with the 2018 Balance of technical regulations. “CUPRA is a big opportunity for SEAT, for our customers and for the business”, said SEAT President Luca de Meo. “The whole project has surfaced as the dream of a group of people who were looking for a way to conquer a new group of car lovers.”

SEAT Vice-president for Sales and Marketing Wayne Griffiths highlighted that “Our ambition for the CUPRA brand is to double the sales within the next 4-5 years, focusing our business model on four main pillars: distribution, partnerships, racing and product.”