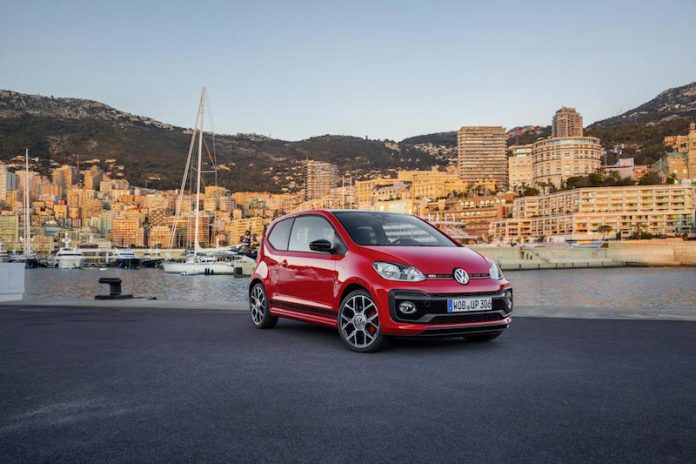 So you want a hot Volkswagen, but you also want a city car? Well the new Volkswagen Up! GTI could be right up your street, and this week the German brand has revealed how much it will cost. I’ll be honest, I’m still yet to be convinced by this car as I personally think it’s a bit down on power, but I suppose that never held back the Suzuki Swift Sport or the Mazda MX-5. These two cars prove that you don’t need a Goliath amount of performance to have fun.

How Much? What’s Included?

Available to order now, the new Up! GTI is priced from £13,770 and is fitted with a small, but perfectly formed three-cylinder 1.0 litre turbocharged petrol that offers up 113bhp with 200Nm of torque. As well as the pint-sized engine, the Up! GTI offers features such as ‘Jakara Red’ trim for the sports seats, a sporty flat-bottomed steering wheel, a 5″ colour touchscreen, GTI styling and red ambient lighting. On the outside you have the infamous red GTI stripe running along the front, plus there are chunk 17″ alloys and a nicely sized exhaust. With a total weight of 1070kg, it’s fair to say that the Up! GTI is far from a porker, but as you can imagine, progress from the 1.0 litre unit will be modest. Power is fed through to the front wheels via a 6-speed manual gearbox, and if you work the car hard enough you’ll be able to hit 62mph in 8.8 seconds with a top speed of 122mph. These sort of figures hark back to the car that made the hot hatch genre so successful in the first place – the Golf GTI. It’s very unlikely to break any lap time records, but the advantage of having an engine that is probably small enough to fit in most pockets is that it won’t require to be fed all too often. This is because it’s able to offer up to 58.9mpg and although it may be red in colour, it’s rather green in spirit as it emits 110g/km. The car also comes in a choice of three-door or five-door to offer better practicality. So then, the Up! GTI won’t cost the earth to buy or to own, it offers a good economy, it’s light, it looks good and it’s bound to put a smile on your face. Maybe the Up! GTI is a better proposition than what I first though…

Although, what about an R model? Hmm… Welcoming the arrival of the newest member of the Volkswagen GTI clan Geraldine Ingham, Head of Marketing at Volkswagen UK, said: “The buzz around our newest GTI is remarkable, and rightly so. This is a wonderful little hot hatch that simply makes driving truly fun once again.

“The fact that it is so accessibly priced, and yet so generously equipped, will I’m sure only add to our charming new little pocket rocket’s irresistible appeal.”