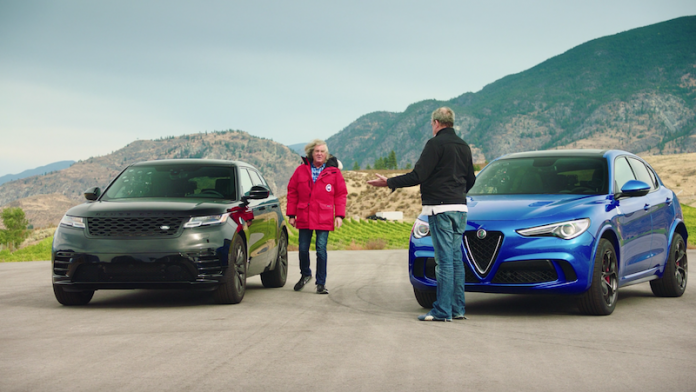 Hello everyone! First off, I’d like to thank all those that have sent me messages of support for what has been a difficult period in life which is ongoing. Anyway, on to more positive things – The Grand Tour. Last week’s episode was a solid effort, but not quite as good as the others if you ask me. Could this week improve though? Let’s find out.

It’s no secret that SUVs are very popular at the moment, therefore it makes sense for Clarkson, Hammond and May to test out three of the latest models. With it being The Grand Tour, they are far from the run-of-the-mill models. The destination for this test is Canada, more specifically the Area 27 race track, which as Clarkson states, was designed by F1 champion Jacques Villeneuve.

Clarkson was the first to arrive, and his wheels of choice is Alfa Romeo Stelvio Quadrifoglio, a car which is essentially a Giulia Quadrifoglio on stilts. In fact, Hammond and May are quick to point out that the ride height looks too high, with the Hamster stating it looks like “someone’s startled it”. This line certainly gave me a chuckle, and you have to admit he had a point. What did he and May bring to the party though?

May turned up in a gorgeous blacked out Range Rover Velar, although Clarkson remarked it looked “hideous” and that it probably has a glovebox filled with “MDF”. He meant MDNA in case you are wondering. That leaves Hammond, who opted for the Porsche Macan Turbo S, which I suppose should come as little surprise as he rather likes Porsche – and a major car accident.

The first part of the challenge is to test the ‘Sport’ part of SUV, and to do this they send a BMW M3 around the track to set a blistering lap that the SUVs would need to try and beat. May goes first and predictably he comes stone dead last, but it looked like he was given it his all on the track. Hammond goes next, prompting Clarkson to make a joke about Hammond’s wife saying that if there was so much of a tyre squeal from Hammond’s lap that she would divorcing him. It was quite a tidy lap from him, so I think he’s in the clear. That left Clarkson to try his hand at getting a fast lap and the Stelvio proved to be a bit of a handful due to the steering rack that Clarkson stated was too quick for the car. The upshot is that none of them were able to beat the M3 – not a great start…

Maybe the SUVs can make up for it with the ‘Utility’ part of the test. For this, Hammond drafts in a pack of rather sizeable dogs that the trio need to attempt to get in to their boots. This was actually my favourite part of the opening segment of the film as I found it very entertaining watching three grown men struggle to do something as simple – in theory – as loading some dogs in to the car. The upshot? The cars seem to fail at this as well.

Surely they can make it up with the ‘Vehicle’ test? In this test the trio need to beat a mere horse around a barrel run. These are are cars with several horsepower up against a car with just one. Things didn’t go well though as Hammond and Clarkson’s cars went in to limp mode, and rather predictably, May almost got lost. So the cars seemed to fail at everything and we go back to the tent. Thankfully that wasn’t the final conclusion, otherwise that would have been a rather pointless test in my eyes.

A Brief Walk Down Conversation Street

Conversation Street was a bit of a short one this week and in it the trio continue to discuss SUVs, stating that they are pointless. Clarkson has a theory about why they are so popular, but if you ask me it’s a pretty old theory, one that dates back to when Chelsea tractors were all the rage. The theory is that people buy SUVs to feel safer in case they are to crash in to another SUV, which leads Jezza to liken the car genre to nuclear weapons. Let’s be honest, the Model X is not exactly a new car, it’s been around for quite some time. Hell, even I’ve had a chance to test the Model X before Jezza did – feel free to check out the article/video. Right, now my shameless plug is over, back to the Jezza’s test. To begin with he talked about the cars gimmicks, such as the sketchpad, which he uses to draw a penis. Oh Jeremy… He then takes it on to the motor to discuss its autonomous features, prompting him to declare the Model X as the most relaxing car he’s ever driven.

This is a Model X though, so of course, there is the obligatory demonstration of the ‘Ludicrous’ mode. If you don’t know what this is then I have just one question for you – where the hell have you been?! Clarkson brings an Audi R8 to the party to take part in a drag race, and surprise, surprise, the electric SUV won.

What was a surprise was towards the end of the test he filled the car up with lawyers so he could talk about the negatives without risking another lawsuit. The chances are this was not needed but it provided good humour and although some may think it was facetious but it was typical Clarkson humour – I enjoyed it. I particularly liked how he dealt with the lawyers towards the end of the film too…

As Interesting As Watching Golf

You may think I’m being harsh, but I found this week’s Celebrity Face-Off a bit dull. The aim was to see who was the fastest golf enthusiast, which meant there was the rather unusual pairing Rory McIlory and Parish Hilton. Because they are like chalk and cheese, I found the chemistry rather flat. In short, it was about as interesting as actually watching golf if you ask me. Let’s move on.

That’s Not An SUV!

The action heads back to Canada, where Andy Wilman has instructed the GT boys to take another stab at testing the Stelvio QF, Velar and Macan Turbo S. It quickly becomes apparent that Clarkson has traded his Stelvio in for a Raptor, which is…a pick up truck. The reason for this, is because you cannot fit a towbar to a Stelvio, which I think is an oversight for an SUV. Ya gotta love the Italians haven’t you?

The test is very simple, the trio need to race each other with their speedboats attached to see who has brought the best SUV, although Clarkson should have disqualified straight away. He got his punishment though as his trailer gave him a lot of trouble when he was required to do a U-turn after hitting a dead end. Watching him navigate was a real laugh-out loud moment, and I also found it funny how he described trailers as having a vindictive mind. After boasting that his Macan has the best all-wheel drive system, Hammond quickly became stuck as he and the Porsche struggled to climb the snowy hill. Amongst all this, May has barely moved a muscle, well only the ones needed to unfold his map. As you would expect from the trio, they all choose different paths and different methods. I won’t tell you who won, but I will say it was a decent film although I found the challenge lacked a bit of imagination – more challenges would have been good.

Another solid episode from the boys, although it was just a bit too SUV-orientated for my liking but they are popular a the moment, plus SUVs haven’t featured too much on this season so far. I was hoping that there would have been some more challenges for the test, plus I found Celeb Face-Off a bit boring. On the plus side, I did rather like the Tesla film and the whole episode had good humour throughout.