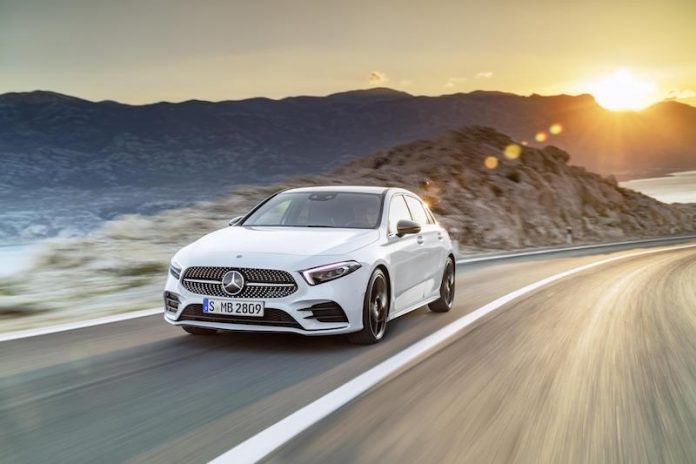 Remember the very first Mercedes A-Class? Launched in 1997, it was far from a looker and it’s almost impossible to believe it’s related to the new model from the German brand. Actually, even the outgoing model looks a bit frumpy compared to the sleeker, new A-Class if you ask me. It’s not just new face that has been given to the latest version of Merc’s premium hatchback, there is more space, new technology and new engines too.

The new A-Class has taken its front end design from the CLS coupe, and although I wasn’t a big fan of the design language on the CLS, I feel it looks better suited for the A-Class. The outgoing model looked a tad soft and a bit too rounded on the edges, but the new model has no such issues in my opinion. It’s larger too – the new A-Class is wider and longer, meaning there is more space inside for both occupants and luggage. Mercedes has stated that passengers will enjoy more shoulder, knee and elbow room, plus the cabin has got better areas of storage. The boot has increased 29 litres compared to the outgoing model, offering a total of 370 litres. Loading in to the boot will be easier too, thanks to wider opening generated by new design of the rear lights.

I Can See Clearly Now

The rear lights aren’t the only lights, to get a revamp. Although the A-Class offers only halogen headlights from standard, buyers will be able to specify multibeam LED headlights as an optional extra, which contain 18 individually actuated LEDs are housed in each headlamp. These are able to light the road efficiently and are able to adjust automatically, but they shouldn’t dazzle too much as Mercedes states the LEDs emit a daylight-like colour to make it easier on the eyes. LED high performance headlamps are also available as a further option.

The new A-Class is the first Mercedes model to be fitted with the new fancy multimedia system called Mercedes-Benz User Experience – or MBUX for short. This system has artificial intelligence and it’s also able to learn from the driver’s habits, leading Mercedes to state the system forms an “emotional connection between the vehicle, driver and passengers”. Ok, not sure about that but I’m sure it’s bound to be an impressive system. It offers natural speech recognition, which can be awoken by simply uttering the words, “Hey Mercedes”, much like using Google, or Alexa. The system allows works hand-in-hand with the new and improved Mercedes me connect services, which offers services such as Vehicle Tracker, navigation services as well as offering information such as up-to-date fuel prices in the area, or the availability of parking spaces.

The Tech Stop Doesn’t Stop There

Like other Mercedes models, the new A-Class will have a dashboard presented with two large displays to form a ‘Widescreen Cockpit’, plus there are no less than 64 interior colours to choose from – don’t even think about complaining about too little choice. The inside itself has been given a complete makeover, so it looks bang-up-date and cutting edge. On the topic of cutting edge, the A-Class borrows features from its S-Class stablemate. This means there are semi-autonomous functions such as Active Distance Assist DISTRONIC. This feature is part of the Driving Assistant Package and is able to support the driver in numerous route-specific situations, and predictively and conveniently adjust the speed e.g. when approaching bends, junctions or roundabouts. There are other safety systems such as lane keep assist, autonomous emergency braking as well as Pre Safe Plus, which is able to predict a rear-end collision and then apply the brakes to prevent a forward jolt following impact.

What About Those New Engines?

To begin with, there will be a 118bhp 1.4 litre petrol engine as well as a 1.5 litre diesel, which produces 84bhp. Both these engines will be mated to a 7-speed dual clutch automatic, but the petrol will also be available with a 6-speed manual, which will go on sale towards the end of the year. As of summer this year, there will be a 2.0 litre petrol which produces 163bhp, which is mated to the 7-speed auto. This is most potent engine you’ll be able to enjoy in the A-Class until the A45 AMG gets announced. The 2.0 litre is able to hit 62mph in 6.2 seconds and will continue to a top speed of 155mph. The diesel is the best for economy of course with a combined figure of 69mpg with 108g/km of CO2 emissions.

Prices are yet to be announced, but the new A-Class will be available to order from March onwards, with deliveries to customers arriving from June.