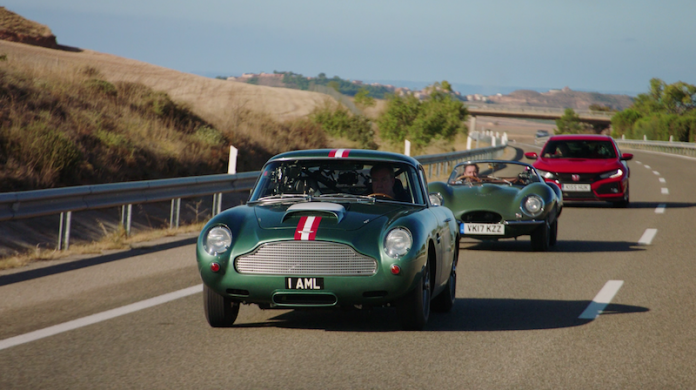 I’ve been impressed by the last two episodes of The Grand Tour, but can episode 8 keep up the momentum? Well when you consider this week’s episode featured the Ford GT (again), a ‘classic’ Jaguar XKSS, a ‘classic’ Aston Martin DB4GT and last, but not least, a Honda Civic Type R, it looks to be rather mouthwatering. So let’s get stuck in to what it has to offer, and as always, there will be spoilers – including those fixed to the GT and the Civic Type R.

Going Back In Time Without Moving

The trio start the show by introducing the ‘new’ Jaguar XKSS, a continuation build from Jaguar themselves, which replaces the 9 ‘lost’ models from the 50s. Before we know it, we join Richard Hammond in the sunny scenery of France. More specifically, Pau, the destination for the first ever Grand Prix race. So then, it’s a historic feature but in modern times, much like the Jaguar XKSS.

The car may look like a well-kept classic, but in fact it was made last year, but to the same specification of the original. Hammond quickly points out that this was a lot easier said than done, especially as a lot of the original plans were lost. Before we get totally lost in the beauty of the XKSS, Clarkson roars in to the film in the equally delectable Aston Martin DB4GT.

Like the XKSS, the DB4 GT is a new car built using old principles, only it’s not entirely true to the original. Well, it is mostly, but it has a slightly bigger engine and it has modern brakes as well, which in the grand scheme of things is probably for the best. Clarkson describes it as an “old car, that is brand spanking new”. Talking over, the pair race around the closed streets of Pau and this is where the cinematography steps up a gear whilst Clarkson struggles to – quite literally. Thanks to the lack of a synchro gearbox, Clarkson, – who is already sweating like a pig due to the lack of wind-down windows and air-con – struggles to move through the gears as he’s forced to rev match. Hammond also has trouble with his brakes, leading him to say that he needed “big hairy balls” to drive it. A bit too much information…

The pair reconvene at cafe to talk over their cars, and all of a sudden, a bright red Honda Civic Type R. Now, who would bring that among such a pure pedigree of cars? It is of course Captain Slow, who remarks that old things are rubbish and that items of a modern nature are much better. This seems ironic, given this is coming from the man who likes to collect – and disassemble – old stuff. Clarkson and Hammond try to get May in hot water with the long arm of the law by egging him on to speed, but sadly for them, it doesn’t work. If you’ve read any of my other Grand Tour reviews, you’ll know that I find that Conversation Street to fall flat sometimes, but I’ve really enjoyed this feature the last few episodes. That trend continues in this episode as I laughing out loud at the alternative names the trio gave to a couple of grit machines in Doncaster. They also discuss the pointlessness of racing a Formula E racer against a Cheetah, the medical sounding name of the Lamborghini Urus and the hybrid – yes, hybrid(!) – Ford F-150. The Ford GT Returns To GT

The Ford GT is back on The Grand Tour after winning the big race in America with Clarkson at the wheel. The tall Yorkshireman is back in the driver’s seat once more, only this time the colour’s blue and the location for the drive is the Eboladrome. Clarkson picks up from where he left off, waxing lyrical about how the car is savage and raw.He likens it to barroom brawler, but that’s not to say it’s perfect. He laments the fact that it has a turbocharged V6 and not a V8, meaning that the noise is not satisfactory, but he accepts it’s been done for lightness. He then also complains about the “ugly” steering wheel and how the fact it feels a bit plasticky. Despite this though, he describes the car as one for proper drivers – those who wear Nomex and not spandex. His final comments on the car did surprise me though. There’s a good chance that many would have never heard of the stars of this week’s Celebrity Face Off. The aim is to find the fastest drummer from a rock band that starts with the letter P. Step forward Nick Mason from Pink Floyd and Stewart Copeland from The Police. Like some of you reading this, I know almost nothing about them, but I do appreciate the music from Pink Floyd. I’ve never really listened to The Police, so I can’t really comment on that. Copeland though was quite an entertaining chap to watch, but that’s not to say Mason was lacklustre. In fact the two of them bounced of each other really well and although it’s not my favourite interview of the season, it was entertaining nonetheless. Mason dabble in classic motor racing whereas Copeland’s car history is much less spectacular, so no prizes for guessing who won this week.

Driven Round The Bend

We head back to the main film, and May is still trying to convince that the modern Civic Type R is better than Clarkson and Hammond’s ‘classic’ models. To help prove this, the trio head to Spain to head to a track, which May states is special. The drive to it doesn’t exactly go to plan as they hit thick fog, which proves to be a problem for Clarkson and Hammond. Mind you, things get even worse for Clarkson as it manages to lose his car… Car found and the fog lifted, Clarkson heads back on the road, but without Hammond as he experiences engine problems with the Jag. Not looking to lose face though, Clarkson tells May that Hammond went up ahead, but this facade is quickly torn apart when May spots that the supposed XKSS is actually a filming car. Nice try Clarkson…

Hammond finally gets back on the road and the trio make it to vibrant – and much warmer – city of Barcelona. This is where they find The Terramar, the oldest surviving bank track in Europe. It’s also very steep as Clarkson, Hammond and May demonstrate by trying to climb up it. May’s idea is to set up a speed trap to see who is able to get the fastest speed. Because of the enormity of the task ahead of them, the three of them decide to get a bit of practice to help get their eye in. Even in the super modern Civic Type R, this looks to be a daunting task, so I’m not surprised Hammond withdrew from the challenge, especially as the XKSS is worth a million quid. That leaves Clarkson and May to go head-to-head, mano-a-mano. Captain Slow may have been at the wheel, but was the Type R able to do enough to win? I’ll leave that for you to find out. Another solid episode from the GT production team, and you know what, this may just be my favourite of season 2 so far. I am a tad disappointed that the Civic Type R wasn’t discussed a bit more than it was, as it felt like a bit of a token feature at times. As always, the episode was presented very well and it was a slick from the get-go. The banter was flowing freely and had me chuckling away, which can only be a good thing. Bring on next week!