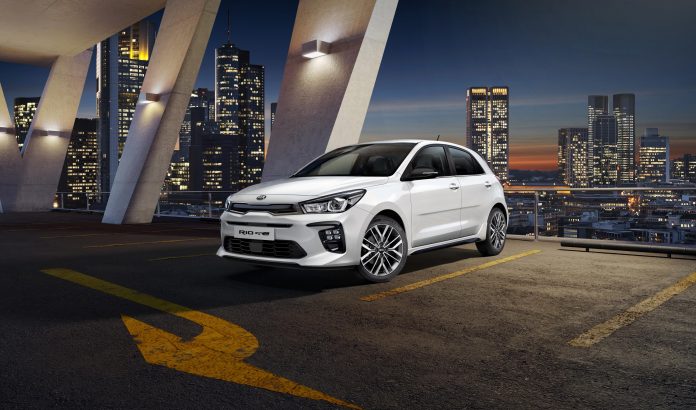 This week, Korean brand Kia has revealed details of the new Rio GT Line, which will go on sale in the spring with prices yet to be announced. It adds to help a sporty trim to the Rio range, as it boasts 17″ alloys, a sporty body kit and Kia GT-inspired interior.

The GT Line ought to stand out from the rest of the range thanks to a gloss black grille, ‘ice cube’ front fog lights, which echo the design of the cee’d GT and pro_cee’d GT. Add these to the aforementioned style features and you have a rather racy looking number on your hands. Helping to finish the look is a double exhaust as well as a rear spoiler and chrome window trim. Step inside the cabin and you’ll find black synthetic leather and cloth seats – once you’re in the driver’s seat you’ll be presented with a new flat-bottomed steering wheel. There’s also new metallic trim surrounds for the gear lever and door switches, and to top it all off, the dashboard is finished with a carbon fibre-effect trim.

It’s A Hot Hatch Then?

No, not quite, but that’s not to say it’s going to be a bore. Underneath the sporty bonnet you’ll find a turbocharged 1.0 litre three cylinder petrol. It produces 118bhp with 171Nm of torque. 0-60 will be dealt with just under 10 seconds and it will run out of puff as it approaches 120mph. What it lacks in power, it makes up for in economy as it offers 60.1mpg on a combined run. It’s a zesty by all accounts, and it should be able to offer up some decent fun. The engine is mated to front wheel drive and a 6-speed manual gearbox, but a 7-speed auto will be available later this year. Two other engines will also be available then too – a naturally aspirated 1.25 litre petrol or a 1.4 litre petrol. Full UK specification and prices are yet to be announced, but more details could well be revealed when the car is presented at this year’s Geneva Motor Show.