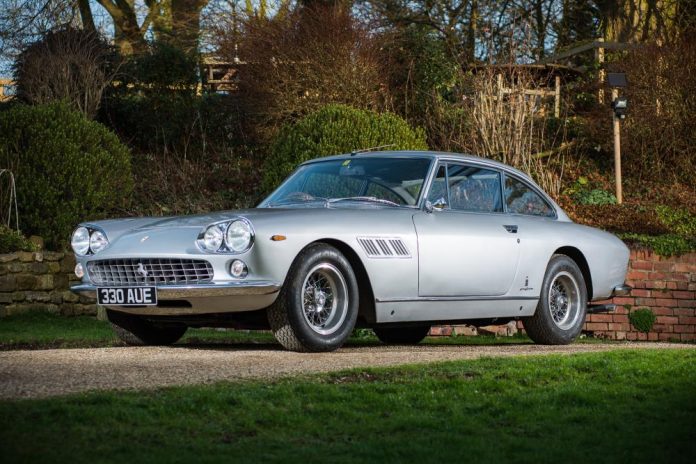 Want to know what the fastest road-going Ferrari was in 1965? I’ll give you a hint, it’s in the title. That’s right, back in its heyday, the Ferrari 330 GT 2+2 was the fastest Ferrari in the road-going stable, plus it was rare, in the case of right hand models. In fact just 44 examples were made in right hand drive and Silverstone Auctions will be presenting one of them at its Race Retro auction on the 24th and 25th of February.

Under the bonnet you’ll find a thunderous V12 engine but the power output is modest by today’s standards. With 300bhp on tap, that’s less than the far less exotic Honda Civic Type R, but in the 60s it was still enough to make it the fastest road-going Ferrari, and with a 0-60 time of 6.3 seconds, it’s still quick by today’s standards. Ok, so the top speed is 152mph, making it slower than most German performance cars, but I’m sure that won’t bother potential owners one single bit. The model going under the hammer is chassis number #6875 and is presented in its original colour of Grigio Argent, described as ‘resplendent’ by Silverstone Auctions. I’m inclined to agree, as I think looks absolutely fab. The car also comes with its period features such as wire wheels, although it does have electric windows.

The car looks as if it’s just rolled off the production line, but that’s thanks to its former which completed a full respray as well as a full bodywork overhaul. It’s not just the aesthetics that have been freshened up – the cylinder head and the gearbox has been rebuilt as well so this prancing horse is as good as ever. This is why the estimate slapped on this rare breed is between £160,000 and £190,000. Better get that chequebook out…

Adam Rutter, classic car specialist at Silverstone Auctions, said: “It’s a rare occurrence for a right-hand drive 1965 Ferrari 330 GT 2+2 Series 1 to come to market, so Silverstone Auctions is proud to offer this beautiful car for sale at Race Retro. We expect bidding to be strong as this exquisite model is offered with a comprehensive history and is very distinctive with its quad headlights, truly evocative of 1960’s fashion.” Adam added: “The Silverstone Auctions Race Retro Classic Car Sale offers a fantastic opportunity to own a rare, and truly exquisite, 1960’s Ferrari. The pre-sale estimate demonstrates the allure of this model and we expect strong interest from bidders and Ferraristas around the world.”