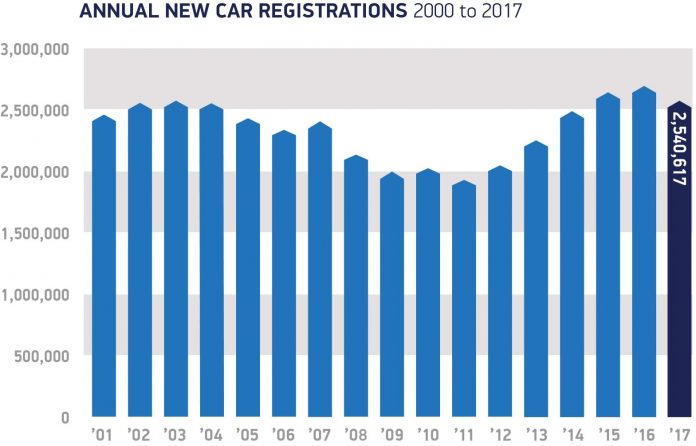 It’s little secret that the changes to the VED – as well as Brexit – had a strong influence on the UK market in 2017. Latest figures from the SMMT (Society of Manufacturers and Motor Traders) shows that the UK market as a whole fell -5.7% in 2017 compared to 2016. It’s also the first time the new car market has fallen in the last six years. However, it’s not quite as bad as you may think.

Yes, the new car market has had a bit of a wobbly last year, but the total amount of sales – 2,540,617 – is still enough to make it the third highest in the last 10 years. There’s also some great news for fans of alternatively fuelled vehicles. Almost 120,000 AFV models were sold last year, which makes for a record high, representing an uplift of almost 35%.

Who was top dog?

Despite not being the top seller every month – it actually lost out to the VW Golf in December – the Ford Fiesta was the top seller overall. This is likely to come as little surprise though, as if I’m not mistaken, the Fiesta has been the best-selling in the car in the UK for 8 years running prior to 2017. Ford was able to shift a total of 94,533 models, which is quite some distance ahead for the aforementioned Golf, which sold a total of 74,605.

That leaves the Fiesta’s stablemate, the Ford Focus, to take third place with a total of 69,903. SUVs may be all the rage at the moment, but in fact there was just one in the top 10 – the Nissan Qashqai. Mind you, the Ford Kuga and the Vauxhall Mokka X were able to make it in the top 10 for the month of December.

“Falling business and consumer confidence is undoubtedly taking a toll, however, and confusing anti-diesel messages have caused many to hesitate before buying a new low emission diesel car. Keeping older vehicles on the road will not only mean higher running costs but will hold back progress towards our environmental goals. Consumers should be encouraged to buy the right car for their lifestyle and driving needs irrespective of fuel type – whether that be petrol, electric, hybrid or diesel as it could save them money.

“2017 has undoubtedly been a very volatile year and the lacklustre economic growth means that we expect a further weakening in the market for 2018. The upside for consumers, however, is some very, very competitive deals.”