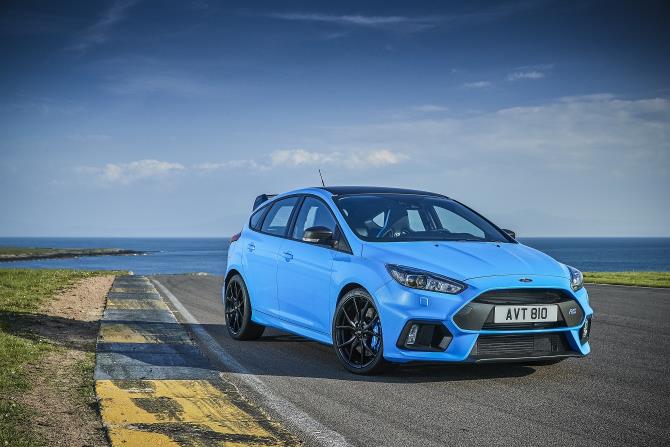 The Ford Focus RS. This a hot hatchback that has won the hearts of many – including me – and received many plaudits in the process. It’s a car that despite it’s firm ride and so-so interior, you would struggle to think of ways to make it better. Ford though, seems have managed to find a way accomplish this, with the new Focus RS ‘Edition’.

Is it faster? Yes and no. The power output still remains the same, so you’ll still get tyre-busting 345bhp being fed to all four wheels. However, the RS edition brings a Quaife limited slip diff, so the car will be faster in the corners, plus you’ll be able to have some more tomfoolery with the car as well. To make the car feel even more racy, the Edition also packs the Recaro shell seats that would normally empty your wallet of £1,145.

Going back to the LSD though, this will be mounted to the front axle, and will improve traction in the bends, meaning that it will bend your face more than it would in the normal car. The mechanical LSD limits the engine torque delivered to a wheel that has reduced traction on the road surface, and redistributes torque to the wheel with more traction to counteract the wheelspin that can hamper acceleration and stability. “Our new Focus RS Edition represents accessible performance at its finest,” said Leo Roeks, Ford Performance Director, Europe. “Improving on the class-leading driving dynamics of the Focus RS was no small task – but our Ford Performance engineers have delivered a drivetrain capable of wringing every drop of performance from the 350PS EcoBoost engine.

As fantastic as the Focus RS is, it’s not exactly the most comfortable car, even in its most docile setting. To make the Focus RS a nicer place to be, the Edition model comes with features such as a heated steering wheel, active city stop and Ford’s luxury pack. This comprises of Ford KeyFree system, cruise control, powerfold door mirrors, privacy glass and rear parking sensors. This pack alone will cost you a cool £1,000, although I feel it’s must-have option for the standard model.

Any Focus RS finished in the iconic Nitrous Blue is likely to stand out in a sea of black, grey or white cars, but the Edition gives some more styling cues to make this model appear differently to its ‘standard’ brother. The paint and the black alloys stay of course – as well as the blue calipers – but you’ll note the black wing mirrors and the black spoiler, which has the RS logo shining proudly in blue. The roof too, is also finished in matte black, to make it look more aggressive, not that it was ever a shrinking violet… The lack of excitement in the cabin is something that has been picked up by many, but there are a few styling changes to help the inside feel a bit sporty. As well as the aforementioned Recaro shell seats, the inside now also has a carbon fibre trim on the handbrake lever, the door handles and the auxiliary dials bezel.

The price for all of this? It’s yours for £35,795, which may seem a fair bit, but if you want a Focus RS with something a bit more, this is the one to have. It’s available to order now, so run to the local dealership, as if you’ve been given a Golden Ticket, to get your hands on one!