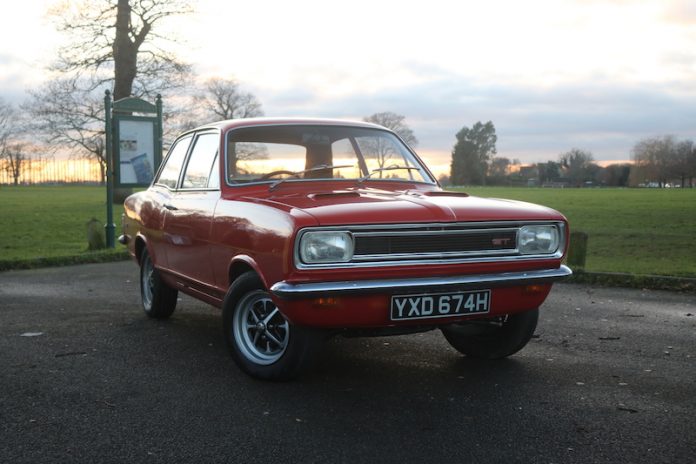 I’ve driven two of Vauxhall’s classic cars already – the legendary Lotus Carlton and the stealthy-but-powerful V6 powered Omega. More recently though, I was able to drive the Viva, but not the city car that’s available to buy brand new from £10,050. For those of a younger generation, you may not know that the new Viva is not the first time Vauxhall has used this nameplate.

The original Viva was made between 1963 and 1979, going through three generations – HA, HB and HC. The HA came one year after the Opel Kadett, a car famously own by Richard Hammond, which as we all know, was called Oliver. Going back to the Viva though, when it was released it went toe-to-toe with the Ford Anglia, and quite interestingly, it was one of the first cars to be marketed towards women. The marketing must have worked though, as Vauxhall produced almost 310,000 models in the car’s first generation.

Early models were offered with a 1.1 litre four cylinder engine which produced 44bhp, which was mated to a 4-speed manual gearbox, but the second generation saw engine sizes increase to 1.2 and 1.6, plus an option for a 4-speed automatic gearbox was added. There was also a 2.0 litre engine, which was exclusively fitted to the GT model, the car tested here.

Any car within a brand’s heritage fleet is bound to be precious, but the Viva GT has even more sentiment attached to it. This is because it’s believed that this very car was a Vauxhall company car back in the day. This is because of the ‘XYD’ on the numberplate, which was a suffix the company used then. Vauxhall then purchased the car the partner of its late owner, Steve Walton, in June 2014. From there, it was restored on and off for two years. As well as a new lease of life, the car was given a new lick of paint. The car came out of the factory as Sebring Silver, but the three-man renovation team thought that Monza Red was a better choice as it was more vibrant. Purists need not worry though, as Monza Red would have been an official colour for the car when it was produced.

I’ve driven a few older cars, but with a production date of 1970, this is easily the oldest car I have ever driven. So stepping in to this after driving the modern cars I had been driving earlier that day was a bit of a culture shock. Firstly, the ignition is located on the centre console tunnel and secondly the car’s cabin is rather minimal, although that’s to be expected. The re-worked 2.0 litre engine fires up first time despite the bitterly cold weather and all is well.

That was until I tried to make way out of Vauxhall’s heritage centre… The clutch has a high biting point and the throttle was sensitive, so I found myself revving the car a bit more than needed as I tried to get used to the clutch. There was of course no power steering, and the pedals were a bit off-set to the right. Finding first gear in the four-speed manual gearbox was also a bit of a challenge at times, which made hill starts…interesting.

I’ll be honest, at first I thought I had bitten of more than I could chew as I driving this around a town centre towards rush hour, which is not exactly the right driving scenes for a car such as this. However, once I got out of town and I was on some more scenic roads, I was able to let my hair down and settle in to how the Viva GT drives.

The Viva GT may be fitted with a naturally aspirated 2.0 litre engine fitted with twin carburetors, but with a power output that is a little north of 100bhp, don’t expect much in the way in performance, but let’s not forget this car is almost 50 years old. Crikey, it’s almost the same age as my dad. 0-60 comes in 10 seconds and the top speed is a dizzying 100mph. On paper this doesn’t sound very fun, but in the real world it’s actually quite nippy. The engine makes a pleasant noise and once I got used to the gearbox, I was able to move it quite swiftly, which you will need to as the ratios are close together. It’s pretty decent in the corners too – thanks to lack of safety features and the modern tech that we demand, it weighs under 1000kg. This means it feels nimble in the bends, making it enjoyable for a little b-road blast. It’s not perfect of course, there’s a bit of play in the steering and the wheel itself needs to be turned more than you would have thought to change direction. It also has some retro-styled body roll too, but in my eyes that makes the car rather charming, it helps to give it a bit of character. It looks the part too, both inside and out.

When you’re not threading the car through country bends you’ll be able to appreciate how comfortable and supple the Viva GT is. With it being an older car, there is no adjustment to the steering wheel and none for the seat either – not that I could find anyway – so the large steering wheel was virtually resting on my thighs. On the plus side, there was enough headroom for my tall frame, and the pristine leather seats were pleasing to sit in.

As the day entered its twilight stage, it was time to turn on the headlights, only to find that they were like tea candles compared to the super bright LEDs you’ll find on modern cars. In fact there were times where it didn’t even look like they were on, but that is just another charm of driving a car as old as this.

And you know what? I don’t really care that the steering wheel isn’t where I want it to be, or that the lights are rubbish, or that it has seatbelts are are awkward to fasten – no inertia reel of course. I don’t care because despite the initial challenge of driving this car, it was a memorable event. Driving an old Vauxhall around the surrounding areas of Luton would normally sound like a pretty dull affair, but cruising around in the Viva GT felt really cool, especially when pedestrians had to stop to take a second look.

The Viva GT then, is a classic car that may be slow by modern standards, but has plenty of charm to make up for it, plus it’s still able to offer up enough fun to paint a smile on your face. If you do happen to see one on the road, make sure to savour it as they’re aren’t many left running – according to howmanyleft.co.uk, there are just 26 left in the UK. So if you’re reading this and you happen to own a Viva GT, look after it will you?