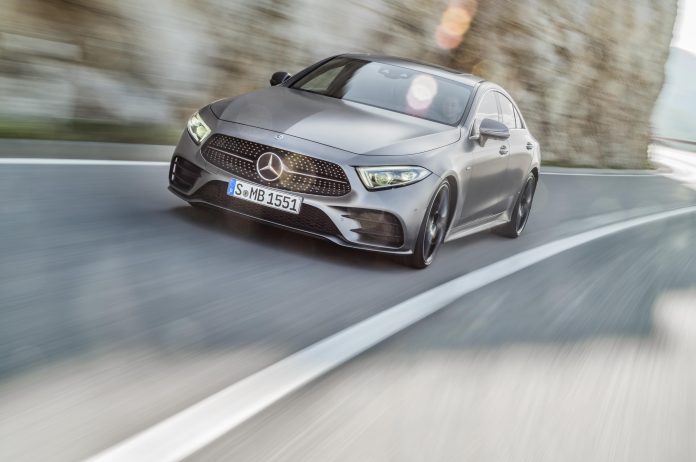 German brand Mercedes-Benz has today announced prices for its new CLS Coupe, which is on sale now although first deliveries won’t commence until summer next year. Offered with three engines initially, the new CLS will be priced from £57,510, which will give you the CLS 350d 4MATIC AMG Line. This features a new in-line six-cylinder diesel engine, which produces 282bhp with 600Nm of torque. Other engines from launch include another in-line six cylinder diesel – also new – which is able to offer 335bhp with 700Nm of torque, which is available in the 400d version. The 450d features a new in-line six-cylinder biturbo petrol engine which is able to produce a total of 389bhp and 750Nm of torque with the help of electricity – that’s right, it’s a hybrid. It’s also rather brisk, thanks to a 0-62 time of 4.8 seconds.

The CLS will is available with just one trim level, which is the AMG Line. This offers features such as 19″ alloys, reversing camera, leather upholstery, split-folding rear seats, 12.3″ infotainment system, 12.3″ cockpit display, DAB radio, agility control suspension, plus ambient lighting that has no less than 64 tones available. There are of course optional packages available, including the ‘Premium Plus’ package, the ‘Comfort’ package and the ‘Driving Assistant Plus’ package, which are priced from £3,895, £2,495 and £1,695 respectively.

The Premium Plus package adds features including an upgraded sound system supplied by Burmester, keyless entry, electronically adjustable front seats and steering wheel, plus an electronic sliding roof to name a few. The Comfort package is able to offer goodies such as nappa leather seats as well as air suspension for better ride comfort. The Driving Assistant Plus package adds a system as used in the latest S-Class, which has route-based speed adaptation, meaning that the car is able to detect upcoming junctions and roundabouts and adjust its speed automatically.

The new Mercedes CLS is available to order now with prices starting from £57,510.