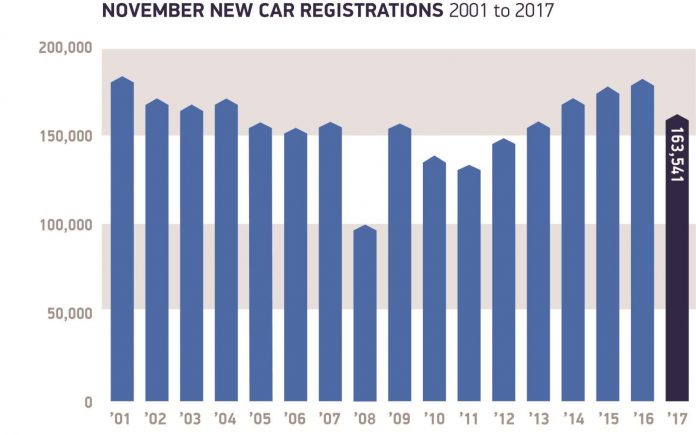 Ever since the change to the VED in April, the UK new car sales market has been on the decline, and figures from the SMMT reveal that November was no better. This means that UK car sales have fallen for an eighth consecutive month, with diesel taking the brunt of declining sales.

How bad is it?

Figures show that the new car market saw a -11.2% decrease compared to the same period in 2016 as 163,541 cars left dealer forecourts compared to 184,101 last year. As mentioned, diesel cars took the biggest impact as sales for this market fell by a substantial -30.6%. On a more positive note, sales for petrol cars were up by 5% and alternatively fuelled vehicles (AFV) rose by 33.1%, however that wasn’t enough to balance out the big decline in diesel sales.

What are the best sellers?

Mike Hawes, SMMT Chief Executive, said, “An eighth month of decline in the new car market is a major concern, with falling business and consumer confidence exacerbated by ongoing anti-diesel messages from government. Diesel remains the right choice for many drivers, not least because of its fuel economy and lower CO2 emissions. The decision to tax the latest low emission diesels is a step backwards and will only discourage drivers from trading in their older, more polluting cars. Given fleet renewal is the fastest way to improve air quality, penalising the latest, cleanest diesels is counterproductive and will have detrimental environmental and economic consequences.”