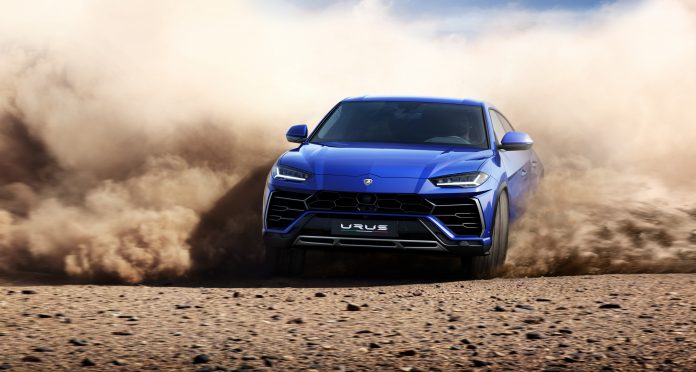 There has been a lot of speculation about the new Lamborghini Urus, and what it look like, and today the bold Italian brand has lifted the covers of its brand new SUV. That’s right, Lamborghini is making an SUV, although this is not a first – remember the LM002?

You may be excused for expecting a V12 engine, but in fact what you’ll find under the bonnet is 4.0 litre twin-turbo V8. It may have four less cylinders than the Bentley Bentayga, but with a top speed of 187mph, the Urus is faster. 0-62? Well, that’s dealt with in a supercar-chasing 3.6 seconds. This power is fed to all four wheel drive via an eight-speed automatic gearbox. Oh, there’s also four wheel steering too, for better manoeuvrability. Going back to the engine, this is the first time that the Italian brand has used a turbocharged engine, which may put some purists off, but I’m sure they will not complain about the 641bhp and 850Nm of torque that’s offer. Weighing in at 2,200kg, the Urus has the best power-to-weight ratio for any production SUV. The engine is made from aluminium to keep the weight down, and it’s mounted low in the engine bay to help give the car a lower centre of gravity.

Drivers will be able to choose from no less than six driving modes, which can be selected via the Tamburo selector featured on the centre console. You have the traditional driving modes such as Strada, Sport and Corsa, as well off-road modes including Neve (snow), Terra (off-road) and Sabbia (sand). Strada is more aimed for comfort, whilst Sport dials things up a notch, but Corsa is where the Urus will really let loose.

As well as supercar power in an SUV body, the Urus features carbon ceramic brakes for better stopping, plus adaptive air suspension and active roll stablisation for better ride comfort and safety, according to Lamborghini. With it being an SUV, it also has plenty of space. Unlike other modern Lamborghinis, it offers space for five and it has a big boot too, with 616 litres on offer, which can be extended to 1,596. I’ll be honest, I’m not a big fan of the name and in fact I’ve seen a few people call it the “Uranus” on social media, which is rather funny, if not a bit mean. For what it’s worth, I rather like the way in which it looks, but I know many aren’t really a fan. Anyway, on to why it’s called the Urus.

Here’s what Lamborghini has to say on the name choice: “As has long been the tradition at Lamborghini, the name Urus is derived from the world of bulls. The Urus, also known as Aurochs, is one of the large, wild ancestors of domestic cattle. The Spanish fighting bull, as bred for the past 500 years, is still very close to the Urus in its appearance.” What else does Lamborghini have to say?

“The Lamborghini Urus is a visionary approach based on the infusion of Lamborghini DNA into the most versatile vehicle, the SUV. The Urus elevates the SUV to a level not previously possible, the Super SUV. It is a true Lamborghini in terms of design, performance, driving dynamics and emotion as well as drivable every day in a range of environments,” says Stefano Domenicali, Automobili Lamborghini Chairman and Chief Executive Officer. “The Urus fits perfectly within the Lamborghini family as a high performance car. It is the culmination of intensive development and passionate skill to create a new breed of bull: a Super SUV that transcends the boundaries of expectations and opens the door to new possibilities, for both our brand and our customers.”

I think the Urus, looks rather good, but I’ll be honest, I have mixed feelings about it. I don’t really care for the name, and call me old-fashioned, but I think it’s a bit wrong to have a Lamborghini SUV in the world. Yes, I know the brand has made an SUV before, and that this genre of car is very popular at the moment, but Lamborghini should stick to what it’s best. That is of course, making bold and in-your-face supercars.

That’s not to say I think the Urus will be a disaster, although I don’t expect to see too many of them on the road. Mind you, seeing any Lamborghini on the road is an occasion I suppose, and I must say I look forward to seeing one of these in the wild, even if I’m not too sure on I agree with the concept.

Speaking of seeing it on the road, how much will the new Lamborghini Urus cost? Well in the UK, it will cost you £131,500 (before tax), with orders opening spring 2018.