This time last year, I was due to drive a McLaren but at the last moment life got in the way and it fell through. At this point I’d like to point out it was through no fault of McLaren, it was a case of things not falling in to place my end. This year however, I wasn’t going to miss another chance when it was presented to me. Hell, I would have kicked my own Nan to have a drive. Actually I would have kicked both of them – sorry Nans.

Nan-kicking aside, let me focus on the main topic of this article, which is of course the 570S Spider. McLaren states that it’s the most “attainable” Spider in its range. At a price of almost £165,000, it’s not what one would call “attainable” but after all, it is the ‘cheapest’ Spider you can purchase from the British performance brand. It’s also a fair bit cheaper than the Ferrari 488 Spider and the Lamborghini Huracan Spider, so I’ll stop being cynical now. Mind you, the model tested had a fair few options, so it was a grand total £196,150. Ok, I’l stop banging on about the price now…

How much weight has it gained?

Taking the top of a car is a wonderful thing, but unfortunately there is a penalty to be had of having the wind in your hair – weight. Normally the rest of the car has to be beefed up to compensate for the lack of the fixed roof so the car doesn’t end up with the same strength as jelly. Thankfully, the clever boffins designed the chassis of the 570S Coupé so well, that the Spider shares the same level of rigidity – impressive stuff.

This means that no extra work has had to be made to make the car stronger, but despite this, the car is 46kg heavier. Why? Well this is due to the mechanism for the fancy folding electric roof. Mind you, this slight weight deficit almost makes no difference to the car’s performance, as I will now express in the form of performance stats.

Powered by the same 3.8 litre twin turbocharged V8 as the Coupé model, the McLaren 570S Spider offers 570PS – hence the name – and 600Nm of torque. For those of you that prefer those stats in old money, that’s 562bhp with 443lb ft torque. No matter how you want to measure the power, it’s fed to the rear wheels via a 7-speed dual clutch automatic gearbox. Although the spider is a little heavier, it matches the 0-62 time of 3.2 seconds that the Coupé can offer, and they both share a top speed of 204mph.

I’m afraid you can only drive as fast 196mph with the roof down though, which is such a bummer, right? The roof itself can be operated in 15 seconds with speeds at 25mph, although if I’m going to nitpick, it does feel like quite a long time when you operate it. Still, it’s faster than the fabric roof fitted to an Audi R8 V10 Spyder Plus. In fact, the 570S Spider as a whole is faster – albeit marginally – than its German counterpart.

One of the key factors here is weight. Yes, the 570S Spider a little heavier than the Coupé on which its based, but it’s still a featherweight compared to the R8, which seems portly in comparison. The Audi has to lug about an extra 197kg thanks to a bigger engine, quattro all-wheel drive and heavier metals. The Audi is around £20,000 cheaper though, so swings and roundabouts I suppose.

Put simply, very well. After a bit of a battle to get my seat just right as the controls are a bit fiddly, it was time to put the roof down and enjoy the Tetbury sunshine, which was rather warm considering we’re now in November. Next it was time to carefully navigate the humps leading out of the venue. “Easy does it, easy does it” – that’s the front over, and now the rear. Almost on to the open road, turn left and then’s it time to give the throttle a poke.

One of the things that will hit you quickly is just how easily this car will pick up speed. The engine barely needs to be provoked to get you off to such speed, that you’re having to back off rather sharpish to keep things legal. Three driving modes are on offer here; Normal, Sport and Track. I was instructed not to venture in to the territories of the ‘Track’ setting, which was no problem, as that would have been pretty much wasted on the surrounding roads of Tetbury. Plus, the car is blisteringly quick even in Normal mode, so no point in running before I can walk.

I have to say, one of the great – of which there are a few – things about driving the 570S Spider, is just how compliant it is. Driving it through your average town with blemished roads, manhole covers and potholes, you’ll find the suspension will soak it up with great aplomb. That’s not to say you won’t notice the bumps, but it will protect you from the harshness of them. The steering still has a nice weight to it, but it’s still easy enough to navigate a town centre, and at no point did I feel the car was to wide to thread through gaps.

Anyway, that’s the boring, menial stuff, what’s it like once you escape on to somewhere that is more scenic and twisty? Pop it in to Sport mode and the car naturally becomes more responsive and eager to get a move in. In auto mode the gearbox will hold on to revs longer, the throttle becomes more responsive and the ride becomes firmer, although it’s not far from boneshaking.

Pull the right paddle to knock the ‘box in to manual mode and you’ll find changes that are lightning fast. The model tested had the optional carbon fibre paddles and pulling them was a delight. In fact, I found myself changing gears unnecessarily, although that was mostly to blip down to hear the engine. I mean c’mon, why wouldn’t you? The engine note sounds rather tasty with the roof down, which really adds to experience. It’s worth noting that this model had the optional sports exhaust fitted.

But it’s not all show and no go as the McLaren 570S Spider can really walk the walk. Through the bends it’s flatter than a pancake and it grips so well that Spiderman would be jealous. This gives you tremendous confidence when driving it, which will make the car very accessible to buyers. Ok, so some may want a bit more drama and a greater sense of theatre, but as a tool for going fast in a civilised, composed manner, I don’t think you can do much better.

The pedals have got a lovely weight to them, especially the brake, which has a reassuring firmness when you press it. The brakes themselves perform very well, which is just as well when you consider how fast this supercar will go. The steering is direct and because it hasn’t got the same amount of weight as its competitors, it feels nimble too. The chassis feels deliciously balanced, which once again gives you confidence to exploit what the 3.8 litre V8 is able to offer you.

It’s refined too – the inside is a very pleasant place to be as there are generous lashings of leather, alcantara, and in the case of this model, carbon fibre. All the controls feel solid, but also delicate at the same time. They may sound like a paradox, but what I mean by that is that there’s a certain finesse in the way in which they are used and interacted with. The stalks feel like works of art and the steering wheel is lovely to hold.

There are some niggles though, the infotainment system may be presented in a lovely fashion, but in my haste to re-program the sat nav to guide the car back to base, I’m afraid I got a bit stuck. So stuck, that I decided to get my passenger to resort to Google Maps. The fact I was rushing certainly didn’t help, but at the same time the system seemed a bit too fiddly for its own good.

You know a car is doing well when the main gripe is to be had with its infotainment system. The way in which the car drives might be a bit too accomplished for some. It’s spot on in so many different areas that some may find the car a tad too ‘perfect’. It’s a car with very few flaws, which is great, but it does mean it doesn’t have the greatest amount of character. If it were a human, you couldn’t imagine it cracking a dirty joke or playing a practical joke.

It’s made in a manner that is methodical, precise and most likely, obsessive. I can imagine the engineers taking their work home with them to make the 570S Spider as good as it possibly be. And you know what? It’s bloody well worked. Does it offer the highest amount of soul? Possibly not, but no-one can doubt that the 570S Spider is a seriously capable machine. Bravo McLaren, Bravo. 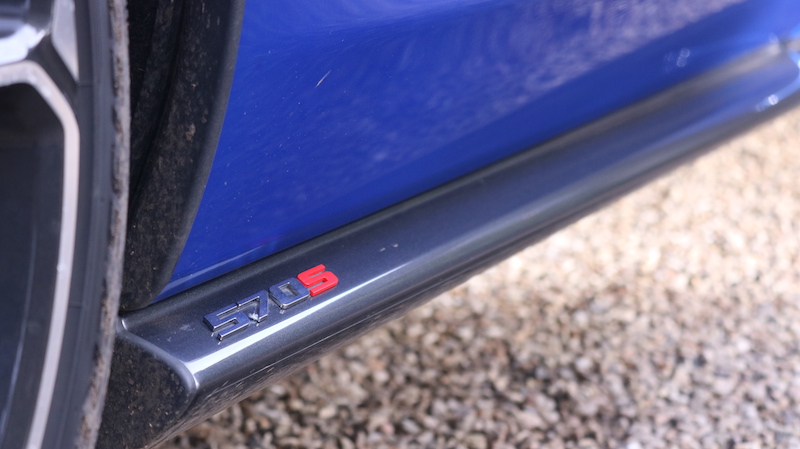