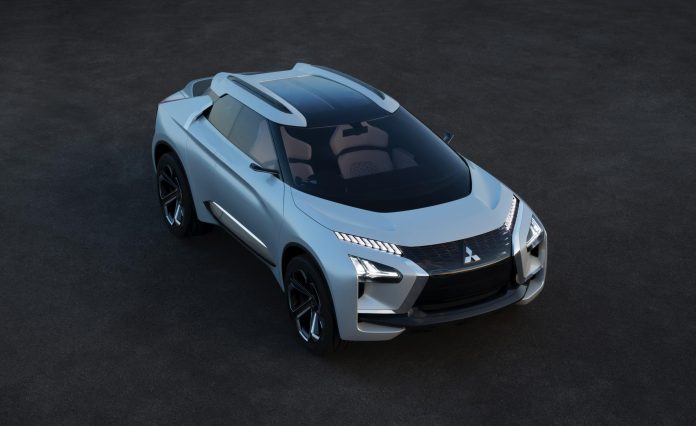 A few days ago I brought you some teaser pictures of the new Mitsubishi e-Evolution Concept SUV, now though, the all-electric SUV concept model has been unveiled. Now that the covers have been lifted off, we can now get a better look at this forward-thinking SUV, which is to be driven by three electric motors with power going to all four wheels. As with most concept models, the e-Evolution looks futuristic and cutting edge. So cutting edge, you get a sense you may draw blood if you rub against it. But despite this, I would be surprised if the production model – if it goes in to production that is – strayed far from the pictures shown here. The front end features a black grille placed behind glass, to help protect the camera needed for the sophisticated AI system.

Underneath the headlamps, there are large air intakes used to draw air in to cool the electric brake calipers, so the front end is as functional as it is sharp. The Japanese brand states that the the side profile of the e-Evolution is unique, thanks to a slanting windscreen and short overhangs. It certainly looks striking, especially when you open all four doors to find the two rear ones are suicide. Instant coolness right there.

Earlier I mentioned the AI system, so let’s touch upon that a bit more. Using an army of cameras and sensors, it’s able to scan driving conditions as well as traffic. With this information, it’s able to offer a special coaching function, which is able to teach better driving techniques to get the most out of the car. It sounds rather clever, but I fear it may become a bit of a nagging Nora.

Step inside the cabin and you’ll find an interior to match the cutting edge exterior design. There are large digital displays which look like they are the product of science fiction as well as an angular steering wheel with the top chopped off. The large flatscreen is the full width of the dashboard, and is able to display information such as environmental conditions, navigation and coaching information.

This screen is flanked by two smaller displays, which show images from the front and rear cameras, plus the panoramic glass gives an almost 360-degree vision, so visibility should be no problem whatsoever. Mitsubishi is still tight-lipped on this one and is not given much away, but the brand has revealed that it’s all electric, so will of course be powered by a battery. Performance stats have not been given, but what is known is three electric motors will provide the drive to four wheels. One motor takes care of the front end, whilst the two other motors power the rear using a new dual-motor Active Yaw Control system which has electronically controlled torque vectoring.

“We aim to provide vehicles that fulfill our customers’ desires through outstanding design, combined with the power, authenticity and carefully-considered functionality MMC is known for,” said MMC Head of Global Design Tsunehiro Kunimoto.