So far this year, I’ve had the Caterham Seven 160S and Seven 270S, two models aimed more for comfort and for the casual driver. This time however, I’ve been testing the Seven 360R, a car that is more at home on the track than the bumpy tarmac of UK roads. Does that mean you can only have fun with it on the track? Read on to find out. 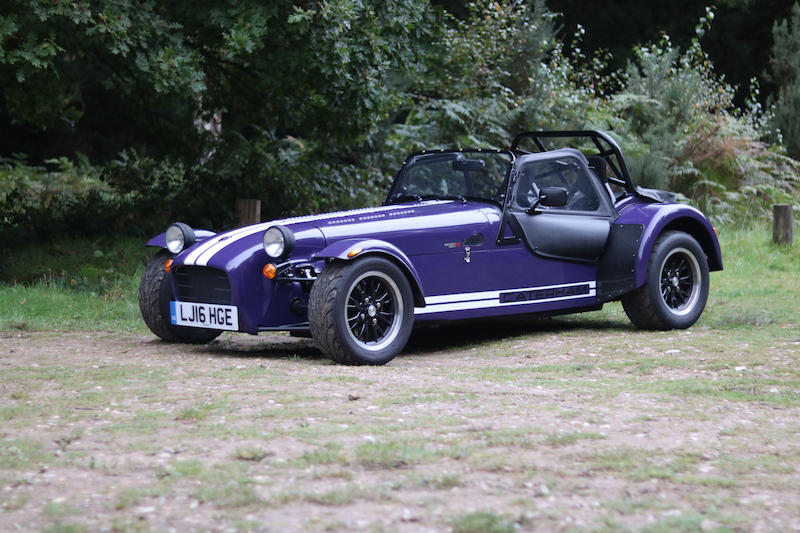 As always, I headed down to Caterham Cars’ depot in in Crawley to pick the car up, and just by looking at it, the signs were clear that this was to be a bit of a track weapon. The R pack, priced at an additional £4,495, adds composite race seats, four point harnesses, a limited slip diff, an uprated master brake cylinder, adjustable suspension and a lightweight flywheel to name a few. It also includes the ‘Black Pack’, bespoke ‘R’ styling, carbon fibre detailing and shift light on the dashboard.

The model tested is the S3 chassis, which is narrower than the more accommodating SV chassis I had on the 270S. This means getting in to the car is a bit of an art form in itself, but an art form that’s likely to strip you of your dignity. Even the Queen couldn’t pull this off and still look majestic. This is made even harder with the roof on, which was required at the time of pick up as the weather looked to turn nasty. Imagine trying to post an elephant through a letterbox and that will give to you some idea. 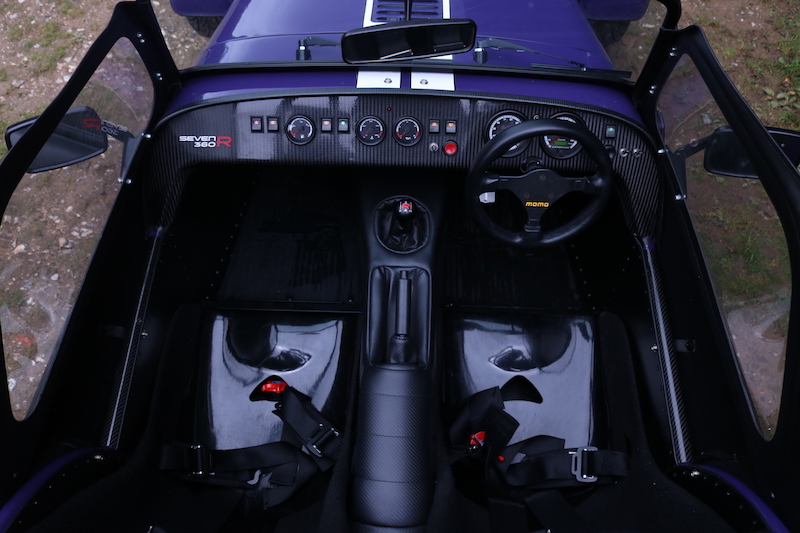 Once in the car though, you’ll find yourself cocooned in the hard, black racing seats, which are obviously not made for comfort, but they did seem to hug me in the right places. My passenger though – my wife – was not so lucky. Due to having a fuller figure and wider hips, she struggled to complete the journey back to South London and had to be dropped off prematurely. An SV chassis can be specified if you want/need more space, but you will need £2,500 for this, plus it will add an extra 25kg to the total weight.

Too Fast For The Public Road?

It didn’t take long to work out the ferocity of power that the NA 2.0 litre Ford Duratec engine had to offer. Sure, it may only be packing 180bhp with 194Nm of torque, but in a car that weighs around 560kg believe me that is more than ample. 60mph will be dealt with in an intoxicating 4.8 seconds, and car will continue to shout its way to 130mph. This power is fed to rear wheels, with a 5-speed manual gearbox to shift firmly through the gears.

Let me tell you now, this thing is quick, I mean really quick. The 4.8 0-60 time certainly feels pessimistic and every time you floor the throttle, it feels like you hit the hyperspace button. And just think, this is from a model that is around the half-way mark in Caterham’s lineup. Above this you have 210bhp 420 and the simply insane 620R which is good for 310bhp. Even half throttle is enough to move from one county to another in a hare’s breath and at times it begged the question, “is this too fast for UK roads?”

I suppose this is a question that’s bound to be subjective, but an area that is bound to be far less subjective is comfort. Yes, I know, it’s not made for comfort so you feel this complaint is about as pointless as a firework display for Stevie Wonder. However, seeing as the car is road legal, one may want to drive it on the road. You can of course, but any bumps will resonate through the cabin like an opera singer’s voice in a theatre. The front actually soaks up the bumps better than expected, but the back will thud if it even smells a whiff of a bad surface.

So You Can Only Have Fun On The Track?

No, not quite. As much as this is far from a daily driver, if you find the right road, you can really have some fun with it. On a B road it eats up the corners like Pacman chasing those yellow dots. It performs in such a way, that it makes my Mazda MX-5 look cumbersome and dim-witted, something I am not keen to admit. The lack of power steering – or any electronic aids for that matter – mean that there are no microchips getting in your way, it’s just you and the car. Make a mistake and there will be no safeguard to get you out of trouble.

But that’s not to say you need to be a race driver to enjoy what the 360R has to offer, which if you hadn’t guessed, is quite a lot. The pedals are absurdly close together, so you’ll need to consider your footwear before getting in, but it’s perfectly set up for heel and toe should the mood take you. As you would expect, the pedals are heavy but offer great feedback, as does the steering as mentioned a few moments ago. All-in-all, the car talks to you in ways that hot hatchbacks and other sports cars can only dream of.

Ok, So What About Track Usage?

Thanks to the good grace of Caterham Cars and the lovely folk at Lydden Hill race circuit, I was able to get some track at short notice. This is where the car really starts to make sense and it feels like you are letting a hyperactive dog off its lease. Press the throttle and the power picks up with much urgency, and before I know it I’m already hitting Pilgrims. I give the brakes a firm dab and swing my way to the right as I direct the car through undulating bend.

The heat in the tyres isn’t quite there, so the back is stepping when too much throttle is applied on the exit of the corner. I push hard as I enter North Bend and I impatiently modulate the throttle as I head in to Hairy Hill. Dammit, I’m on the grass. Ok, need to get some more heat through those semi-slick Avons. As time passes, I start to grow in to the car and track, with the ability to push harder.

I’m getting to the point where I can feel the G forces every time I pass through Pilgrims as the Avons build with grip. The steering is incisive and rich with feedback, so any apexes missed are purely driver error. The speed at which the car is able to catapult itself out of bends is genuinely intoxicating and as I approach 100mph it feels as if the world is passing by me at an alarming rate.

And as you do so, the wind is rushing over the open cabin of the car as the autumn sunlight pours in, warming the parts of my face left uncovered by the racing helmet. Every sense feels like it’s at its maximum sensitivity and you get a sense that if this sensation was bottled, it would sell by the truckload. As a tool in which to thrill, I haven’t driven much like it. I came off the track buzzing all over, in a way I’ve barely experienced. It’s a feeling you cannot put a price on.

At this point I haven’t mentioned the full price of the model tested, mostly because the numbers are far less interesting than the drive itself if you ask me. But I accept this is information you are probably longing for. This is where it gets a little complex I’m afraid, so I hope you’ve had your coffee, and I hope you’ve got a calculator to the ready. 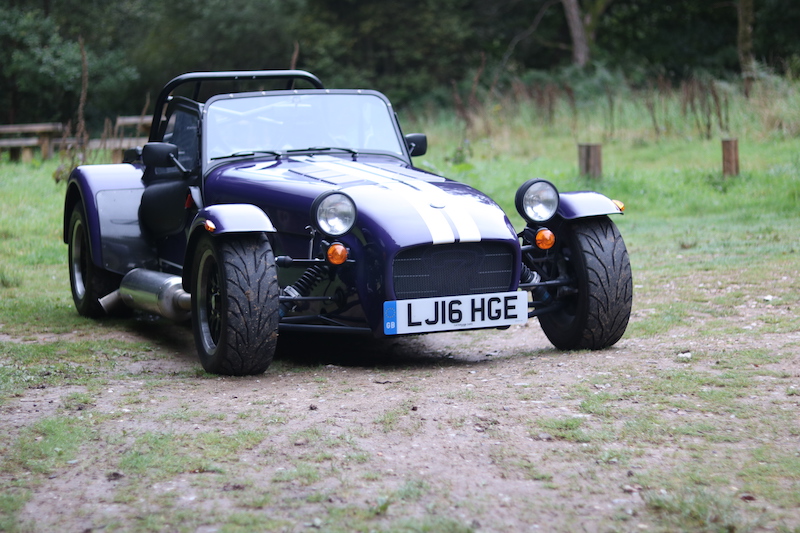 Grand total? Almost £38,000, which is a fair bit for a car you are unlikely to use daily. Granted, not all of those options need to be ticked, but you’re looking at a car that is more money than the likes of the Focus RS, M140i, Golf R and the new Civic Type R. These are more cars that can still deliver thrills on the track, but can be used every day. However, can they offer the same amount of fun as this bug-eyed, track slayer? I fear not.

What we have here is a car that is designed one purpose, a purpose it does very well – track driving. That’s not to say it can’t be fun on the right road, but as you cruise the countryside you get a sense it’s sniffing out the nearest race track so it can really stretch its legs. This is a car that can teach you a fair bit about how a car can, and should be driven. If like me you are not a hardened track driver then you may be caught out every now and then, but when you get it right, boy does it feel good.

For more information about Caterham Cars, head to: http://uk.caterhamcars.com/ 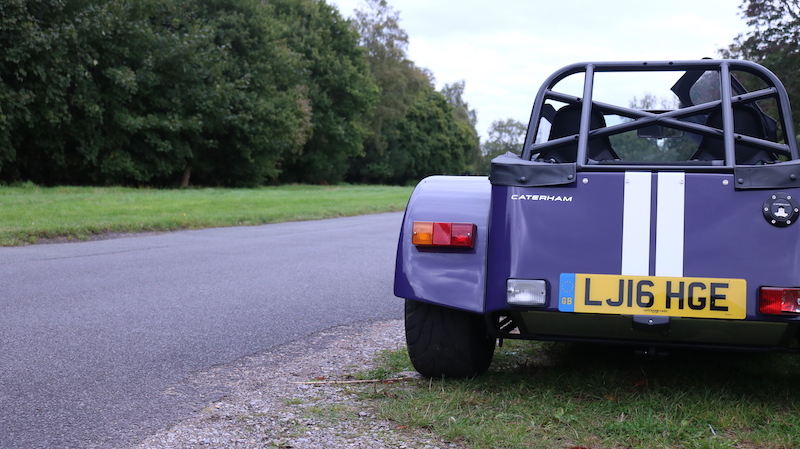