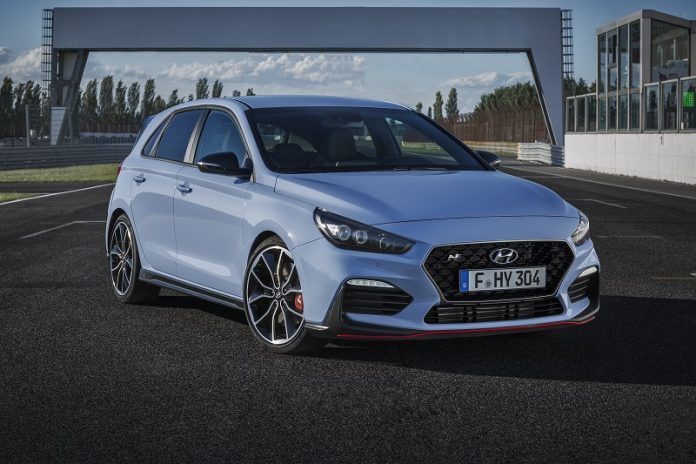 The new i30 N has been hotly anticipated and today the Korean brand has revaled its new – and first – performance model to the world. Why the N? Well this is because the car was born in Namyang and developed at James May’s favourite place, the Nurburgring, plus the N is meant to represent a chicane. 10,000 miles – that is how far the car has been tested in the Green Hell to ensure it is up to the mark, plus it’s been tested on a frozen lack and it’s been entered in two endurance events.

How Fast Is It Though?

Of course, that is what we all want to know. The new i30 N will be powered by a 2.0 litre turbocharged petrol which delivers 247bhp with 353Nm of torque. Granted, it’s not the fastest hot hatch money can buy, but it’s more powerful than Korea’s other hot hatch – the Kia Pro_Cee’d GT. It’s also faster than the Golf GTI, which is certainly going to make people sit up and take notice.

Plus it makes up for it with clever features such as launch control and rev matching. The 2.0 litre four-pot turbo unit will help the i30 N crack 62mph in 6.4 seconds and it will max out a top speed of 155mph. Mind you, you can make use of the Performance Package which will offer you 271bhp with the same amount of torque, meaning that the 0-62 time is a tad faster (6.1 seconds), although the top speed remains the same. The Performance Package also offers up larger brakes to help deal with that slight increase in power.

This power is fed through the front wheels with the help of a 6-speed manual gearbox, plus there is an electronic limited slip diff and the suspension is also electronically controlled. This has led Hyundai to proclaim that its hot hatch “love corners”, but on paper at least, it looks like they’re not wrong. The standard i30 N comes with 18″ shoes which are clad with high performance Michelin tyres whilst the Performance Packages increases the size to 19″ and adds Pirelli P Zero tyres. There will be five driving modes made available in the new i30 N; Eco, Normal, Sport, N and finally N Custom. To select these modes, all the driver needs to do is to access two buttons on the sports steering wheel, the same place where the rev matching button can be found. The performance tech does not stop there though as also in the cabin drivers will be able to make use of a lap timer and also a G-force meter, so you can brag to your mates at the pub to your heart’s content. In fact I can hear it already: ” ‘Ere Dave, you wouldn’t believe how much G I got on the North Circular this morning…”

Despite it’s performance credentials, the i30 N does have quite a few safety features to keep you on the straight and narrow. These include lane keep assist, driver attention alert, autonomous emergency braking and high beam alert. In regards to other tech, the i30 N will come with a 8″ touchscreen which will be home to features such as Bluetooth, DAB Radio and smartphone connectivity with Android Auto and Apple Carplay, meaning that you won’t have to sacrifice any creature comforts for the sake of performance. I think it’s a really looking motor, although I’m not sure on ther exclusive Performance Blue paintwork, a colour that is inspired by Hyundai’s motorsport cars. Either way though, I think the other hot hatches on the market should be worried – there’s a new kid on the block.

The prices and release date are yet to be released, but this will be announced later in the year.