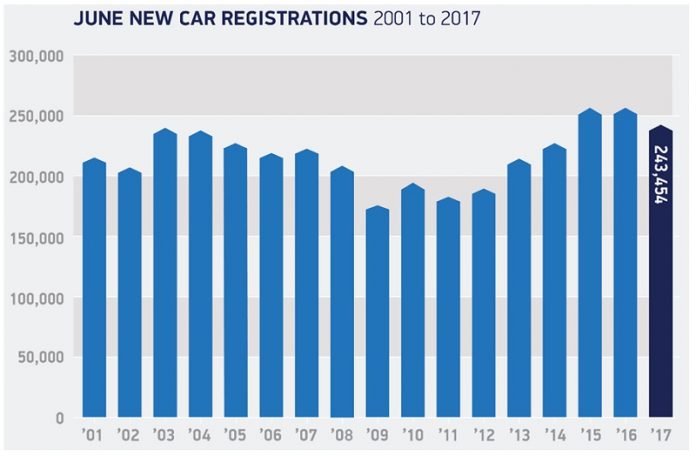 It comes as little surprise that the UK car market has seen a decline, thanks to the change in VED banding, but this took place in April, yet new car sales continue to decrease. Admittedly, it’s not by a massive amount – certainly not one that’s going to set off alarm bells – but it’s still a pity, especially if you consider how well the industry was doing in the lead up to April. Throughout June, petrol cars saw an increase of 2.5% whilst alternatively fuelled cars grew by an impressive 29%. The same cannot be said for diesel, which saw a 14.7% decrease for the month of June which should come as little surprise as it’s not exactly flavour of the month (quite literally in this case).

The Ford Fiesta has been the nation’s best-selling car since dinosaurs were around it seems, but it wasn’t the most popular car in June. Instead, that accolade goes to the new Volkswagen Golf, which beat the Fiesta’s 8,601 sales figure with a grand total of 8,808. Let’s not forget that the new Fiesta has just landed though, so the popular supermini could well find it’s way back on top next month, plus it’s still the best-selling car year-to-date with a total of 59,380 units.

Mike Hawes, SMMT Chief Executive, said, “As forecast, demand for new cars has started to cool following five consecutive years of solid growth but the numbers are still strong and the first half of the year is the second biggest on record. Provided consumer and business confidence holds, we expect demand to remain at a similarly high level over the coming months. It’s encouraging to see alternatively fuelled vehicles experiencing rapid growth but adoption is still at a relatively low level and more long term incentives are required if this new generation of vehicles is to be a more common sight on British roads.”