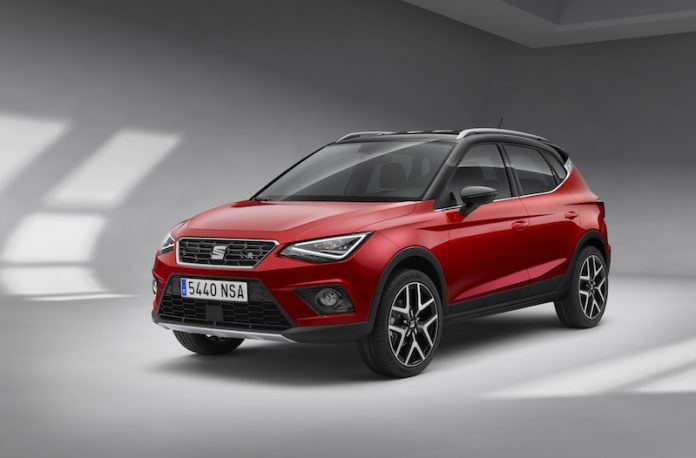 SEAT has enjoyed a good level of success with its first ever SUV, the Ateca, and now its looking to build on that with a new SUV model. It’s called the Arona, and will sit below the Ateca in the Spanish Brand’s SUV range, with a bigger model arriving next year, which is yet to named. That is then though, let’s focus on the now.

Following the success, SEAT is now looking to add a crossover to its range, which makes sense when you bear in mind this segment of the market has increased four-fold in the last two years. Needless to say, that’s some impressive growth. Speaking of which, like the Ibiza, the Arona sits on the VAG MQB A0 platform, but offers more space. This is because the Arona is 79mm longer than the Ibiza and 99mm taller, meaning there is more room inside for occupants, plus buyers will be able to make use of a 400 litre boot.

In recent years SEAT has been known for offering a high level of technology in its cars and the Arona is no change. The new crossover will offer buyers features such as front assist, adaptive cruise control, 8″ touchscreen with smartphone integration, keyless entry, rear view camera and wireless phone charger. Of course there are optional features such as rear traffic alert, blind spot detection and park assistance system.

What About Trims? Engines?

The sharp looking Arona will be offered in Reference, Style, FR and XCELLENCE trims, but the full specification is yet to be announced, so let’s focus on the engines. There will be a choice of three petrols and a choice of two diesels. The entry level petrol is SEAT’s three cylinder 1.0 litre TSI, which produces 94bhp and is fitted to a 5-speed manual gearbox. The next engine up is also a 1.0 litre TSI, only this time it comes with 113bhp and can be mated to either a 6-speed manual or a 7-speed DSG.

The new model will receive its public debut at this year’s Frankfurt Motor Show with prices and release date yet to be announced.