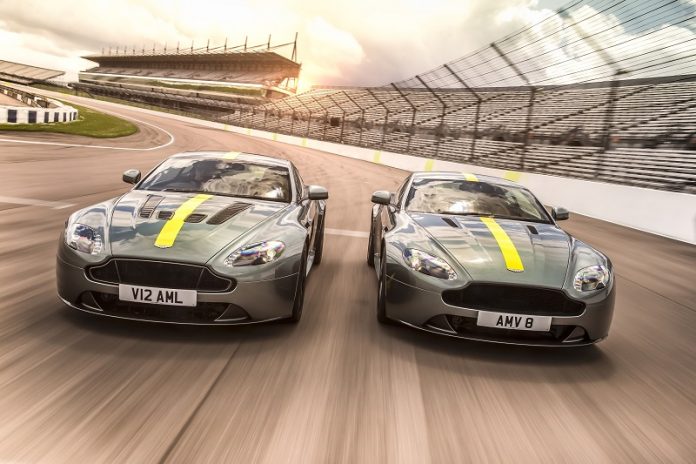 Like many people, I’m a fan of Aston Martin. There’s an air of respect that you don’t really get from other supercars, plus it’s the choice of car for James Bond, not unless you’re Pierce Brosnan in the 90s – *shudders at the thought of Bond in a BMW*. The Vantage name has been used for the British brand for many years, but what if you’re not quite satisfied with the current model?

Well…Maybe the new Vantage AMR (Aston Martin Racing) could be for you. Like the GT8 and the GT12, the AMR is inspired by Aston Martin’s motorsport division and it’s clear to see this, especially if you opt for the ‘Halo Pack’. No, this won’t give the car a glowing ring above it as you drive along, no instead what you’ll get is design inspired by the #95 GTE race car that won FIA World Championship last year. This means you’ll be treated with a rather fetching Stirling Green paint finish, which is complimented with Lime Green accents both on the outside and the inside. This striking look is even finished off with a Union Jack design on the famous Aston Martin wing emblem. If this isn’t your cup of tea, or you happen to dislike green, then don’t worry as other choices are available. These include Stratus White with an Orange graphic; Ultramarine Black with Blue graphic; Zaffre Blue with Red graphic; and Scintilla Silver with Grey graphic.

The Vantage AMR may be the baby of the new AMR range, with the Vantage AMR Pro acting as the more hardcore model, but that’s not say it’s all show and no go. From the 300 that are to be produced, Aston Martin will offer buyers the choice of either a 430bhp V8 or a 595bhp V12 engine, which will be produced in respective numbers of 200 and 100. There will also be a choice of bodyshape, as buyers will be able to have either a coupe or a roadster model.

As with any new car there will be an ample choice of options including the AMR Aero Kit. This will be for the coupe models only, and includes a front splitter and dive planes, side sills and a rear spoiler, all of which are finished in carbon fibre. Speaking of carbon fibre, if desired buyers can choose to have carbon fibre seats, as well as a plethora of other details finished in said material such as front grille, door mirrors and even headlight infills. A titanium exhaust is also available, which represents a 14kg saving on the V12 model compared to a standard Vantage 12.

Aston Martin President and CEO, Dr Andy Palmer, said of the Vantage AMR: “It’s a real thrill to see our first AMR model go into production. The Vantage has been an incredible success for Aston Martin, both in V8 and V12 forms. As our most agile and athletic road car, and our long-time representative in the world of GT racing, it is the perfect model with which to introduce the exciting AMR range. “Unmistakable in look and feel the Vantage AMR will appeal to our most enthusiastic customers. These are people who love our cars for their motorsport pedigree, and for their unmistakable dynamic and emotional qualities. Limited production numbers will undoubtedly make them extremely collectible, but they’re so good to drive I’m confident we’ll see many of them being enjoyed both on the road and at track events around the world.”

The new AMR range starts from £97,995, with deliveries commecing towards the end of this year.