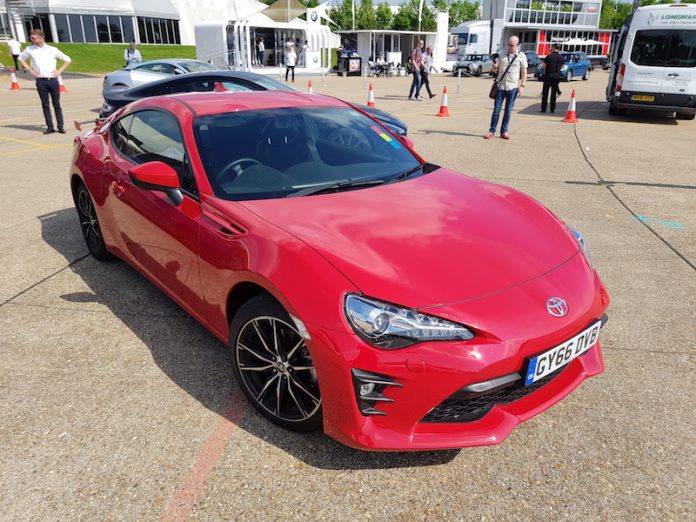 I’ll be honest, any car following the Focus RS was going to have a tough time, so I imagine the Toyota GT86 was not happy about being chosen next. I’ve always been curious about the GT86 and what it’s able to deliver. People always wax lyrical about how this Japanese sportscar is willing to wag its tail every time it gets to a corner, so what would my thoughts be?

Well I’ll be honest, stepping inside the cabin didn’t get things off to a good start. This may be the facelift model, but the inside features lots of black plastic and in truth it feels rather dated. The steering wheel looks cheap and the gear lever feels like it’s come from a budget hatchback. Actually, it kind of reminded me of the MG3 in all honesty. Some may say that’s harsh, but I was expecting a bit more from the cabin it has to be said.

Right, let’s stop bashing the inside finish and focus on what sits in front of it – the 2.0 litre flat-four engine. It’s mated to a 6-speed manual and although the gear lever is certainly not premium, thankfully the change itself is pretty sweet. 197bhp is able to throw out a rather modest 197bhp with 205Nm of torque, so it’s clear the GT86 is not all about out-and-out performance. Its naturally aspirated engine will achieve a 0-62 time of 7.6 seconds and the top speed is over 130mph. Think of this like a Mazda MX-5 – I.E. it’s about how the car handles, rather than flat-out speed. Thankfully, this is an area where the GT86 stars to make up some much needed ground. The car feels well balanced and it also certainly feels dynamic. The interior certainly feels old school and so does the driving, but in a good way. The steering and brakes offer a good amount of feedback, the kind of feedback you won’t find on a lot of a modern models.

As I’ve mentioned in my other SMMT Test Day ‘First Drive’ articles, the tarmac was sticky, so the tail-out antics were few and far between – instead the skinny tyres were able to grip on to the Millbrook Proving Ground’s surface rather well. I’ll be honest, I wasn’t crazy about the engine note – I personally felt it sounded a bit rough and not very well refined. Unfortunately for my ears, the GT86’s engine needs a fair few revs to get going to make progress, due to its lack of turbo. Don’t get me wrong, the GT86 is not a bad car to drive, thanks to its neat handling and balance. However, I don’t think I could buy one, let alone live with one. Sitting inside it is a bit too disappointing and the engine is not really to my taste. I understand this is likely to cause a bit of outrage as so many other motoring writers adore this well-priced Japanese sportscar but I’m afraid it’s not me.

I’m know I’m biased, but if I wanted to buy a Japanese sportscar for around the price of a GT86 – around £27,000 – I’d veer off from the Toyota dealership, in to a Mazda dealership where I would then purchase an MX-5 – and get change.