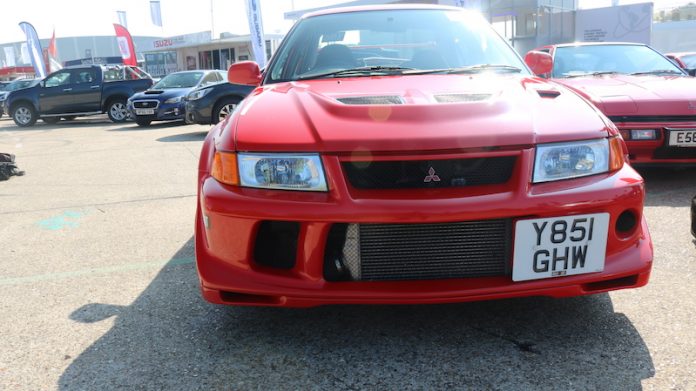 Last week I attended the annual SMMT Test Day, which is a great chance for motoring writers/YouTubers to try out a variety of different cars all in one place. You may have seen my articles last year where I was able to get through a whopping 19 cars. This year though was a bit more of a slower pace as I was doing a bit of filming. I was still able to get through 10 cars, and I will be writing a first drive piece on each one. So where to start? Well the after rushing to book the Aston Martin DB11, I found myself at the Mitsubishi stall. Somehow, the legendary Lancer Evo had no queue and it was essentially begging me to be driven – how could I refuse? I grabbed the keys and jumped in with a chap called Simon from Mitsubishi and turned over the 2.0 litre turbocharged petrol unit.

The car itself is from 2000 but despte this, it’s mileage was under 10,000. This is because this car went straight to Mitsubishi from the factory, and is number 6 – I did joke that they should have had number, but of course that was given to the man himself, Tommi Makinen. Around 200 were made in total, so it’s clear it’s a rare car. This car is even more special as the bonnet has even been signed by the man that inspired this model, a feature I completely missed until I was told about it! The sports seats inside were fantastic and although they weren’t the most comfortable, they kept me in place really well in the bends. Speaking of corners, let’s talk about how the car handles shall we. Weighing in at around 1,350 kilos, the car is not exactly light, but through the corners it feels nimble and you get the sense it will keep gripping until the tyres comes of their rims. The steering was surprisingly light, but still direct and accurate enough to make cornering engaging and fun. Right, now on to the engine – as mentioned, it’s a 2.0 litre turbocharged petrol, which produces 276bhp and 373Nm of torque. It’s mated to a 5-speed manual gearbox which is an absolute treat to use and will help you sprint to 62mph in 4.4 seconds and on to a top speed of 155mph. With it being an older car, there is a fair amount of turbo lag, but when it kicks in, it’s a like waking an angry beast!

In a day where we manufacturers build cars with quick-to-respond turbos, the Lancer Evo certainly feels old fashioned, but that’s not to say it’s a bad thing. In fact, it’s quite good fun waiting for that surge of power to come through, it’s reminiscent of slowly climbing a rollercoaster before hurtling down in a wave of G-Forces. This Lancer Evo really offers an old-school raw driving experience, and one that I won’t forget for some time! It’s not normally the sort of car that I lust after, but this certainly left an impression on me, which meant the next car had a tough act to follow.