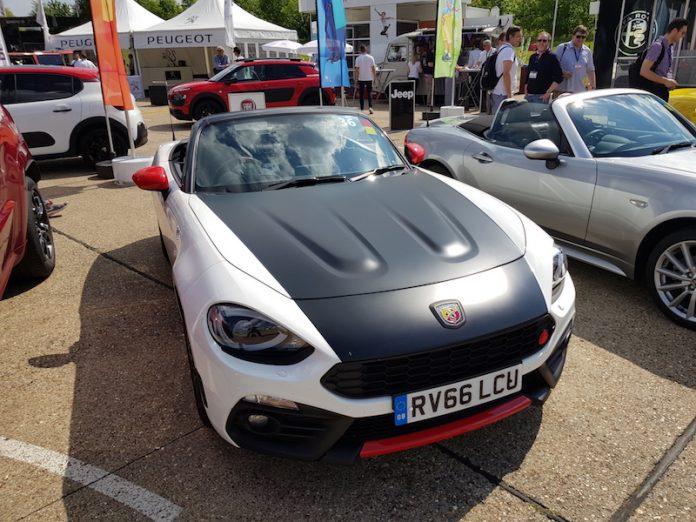 Hopefully by now you may have read my First Drive of the Audi TT RS in which I mentioned that was the third car I drove on the SMMT Test Day. Well I’ve realised that it was actually the fourth – the third car was actually the Abarth 124 Spider. No, it wasn’t forgettable to drive, I just got my order of cars mixed up!

I was hoping to drive either the Alfa Romeo 4C Spider or the Giulia Quadrifoglio, but sadly both were fully booked for the day. Seeing as I was at the FCA (FIAT Chrysler Automobiles) stand, I decided to jump in to the Abarth 124 Spider. This model was finished in white with the retro-inspired black bonnet and it looked just fab in the sunshine. Enough of that though, what’s it like to drive? Powering the Abarth version of the 124 Spider is a 1.4 turbocharged petrol, which may seem a bit piddly, but it’s still enough to offer 170bhp and 240Nm of torque. This means you will hit 62mph in respectable 6.8 seconds and it will continue on to a top speed of 143mph. As you would expect, the power is fed to the rear, with the help of a slick 6-speed manual and a limited slip diff. Turn over the engine and the first thing that will hit you is the meaty exhaust note, which sounds like it’s coming from a much bigger engine – I like it. Set off and you’ll find that the car is rather nippy, but on the hot day I drove it, cruising speeds actually felt more pleasant. That’s not to say this car can’t tickle your nerve endings when the going gets twisty – yes, there’s a bit of body roll, but there is plenty of enjoyment of throwing this Italian sportscar through the corners. On the topic of nationality, as you probably know, the FIAT/Abarth 124 Spider is made in conjunction with the new Mazda MX-5, so it should be reliable as the day is long. Sadly I’ve not driven the current MX-5, so I cannot draw a comparison. I can say that the 124 Spider is a complete hoot in the corners though and don’t forget you have the advantage of having a limited slip diff to help deliver more tail happy action.

The Abarth does a fantastic job of painting a massive grin on your face, but I’m not sure I could splash out the £30,000 asking price, for what is essentially a slightly spicier Mazda MX-5. Having said that, even though it was a short drive in the car, I really fell in love with it. I was expecting it to be good, but not quite that good. That meaty exhaust note mixed with the car’s styling and how it drives produces rather powerful potion. But is powerful enough to make you part for the inflated asking price? My rose tinted glasses say it could well be…